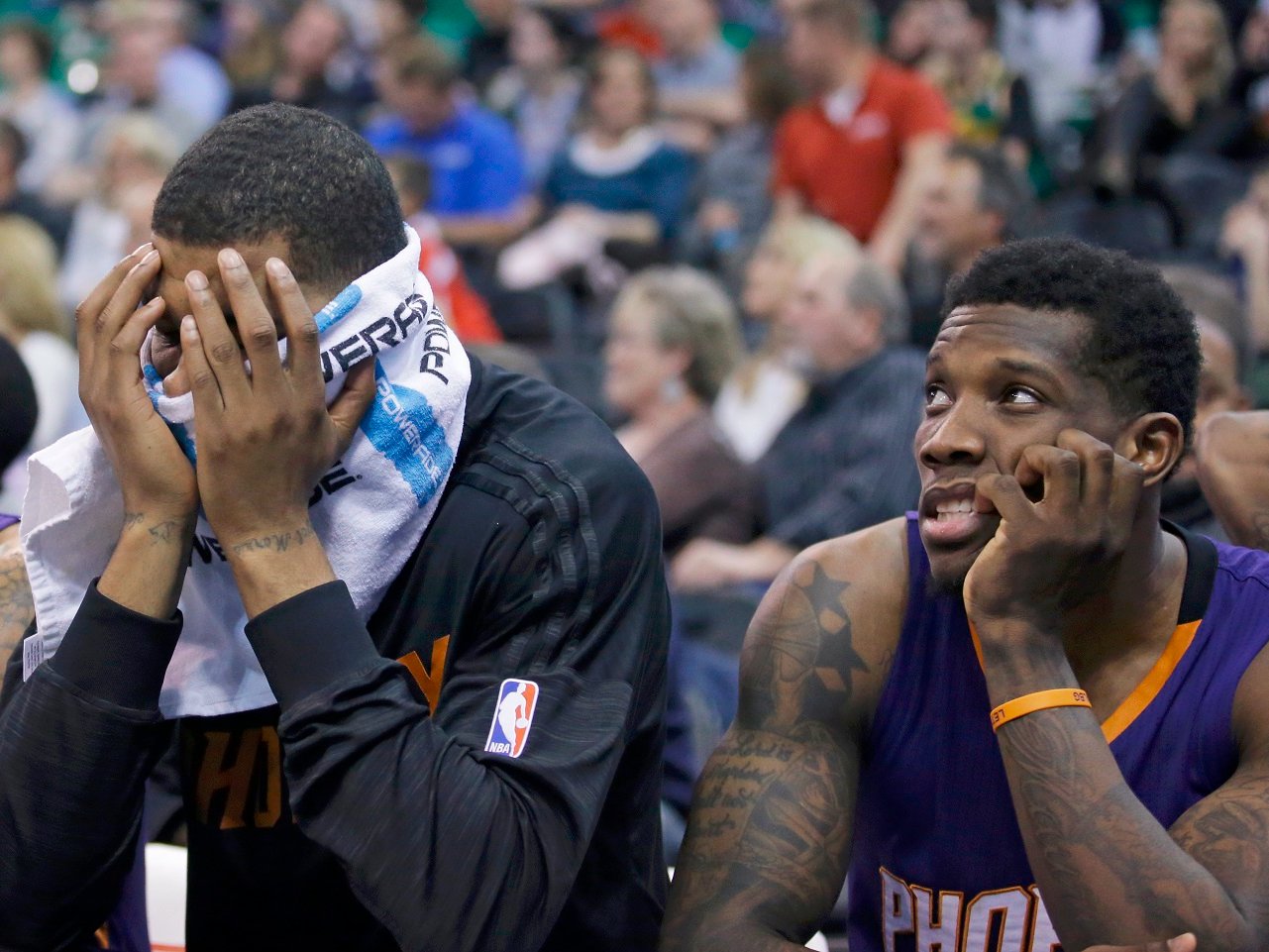 The Phoenix Suns have plunged to the NBA’s abyss in what may be the most disastrous situation in the NBA.

Things hit a new low Sunday night when the Suns were trounced by the Lakers, managing only 22 points in the first half against the second-worst team in the NBA — narrowly avoiding the record for fewest points in a half in NBA history.

For the Suns, there’s little relief on the horizon, and much of it comes from their awkward roster construction. Some of this is the result of a surprising, 48-win season two years ago that reshaped the way the Suns handled their roster.

In 2013-14, the Suns looked like a rebuilding team. They had traded away center Marcin Gortat for salary relief and a future pick, they hired Hornacek despite having no head coaching experience, and they had a largely unimpressive collection of young players, role players, and veterans. Somehow, that team found a way to win with uptempo, spaced-out offense and the dual point-guard lineup of Eric Bledsoe and Goran Dragic.

Though they missed the playoffs because of the insanely competitive Western Conference, after winning 48 games, the Suns looked like a future playoff team, so they continued building on top of that roster. They signed Isaiah Thomas to make a three-headed point guard monster while filling out the rest of the roster with more role players of a similar mode.

Except in 2014-15, the team didn’t have the same magic, finishing with a 39-43 record. Bledsoe, Dragic, and Thomas, clashed, leading the Suns to deal the latter two at the trade deadline for point guard Brandon Knight. This is important, as in dealing for Knight, the Suns gave up a top-three protected 2016 draft pick from the Lakers, then later re-signed Knight to a five-year, $70 million deal. The deal signaled the Suns felt they needed a simple re-tool to get back to playoff contention.

In the summer, they dealt Marcus Morris for cap space. They signed Tyson Chandler to a four-year, $54 million deal, then chased LaMarcus Aldridge and narrowly missed signing him as he went to the Spurs.

Still, coming into this season, the Suns looked rejuvenated, with a Bledsoe-Knight backcourt, Chandler manning the middle, Markieff acting as a playmaking power forward, and several cheap, young players on the edges. After the bad start, the team fired Hornacek’s lead assistants, leaving Hornacek, though after Sunday’s beatdown, his job status is seemingly on shaky ground.

Bledsoe is out for the year after getting surgery on his meniscus.

Markieff Morris continues to be a problem for the team. Morris demanded a trade in the summer after the team dealt his brother, Marcus, and has become a malcontent and non-factor in the rotation. Robert Sarver, the team’s owner, recently called out forward Markieff and an entire generation in an interview with Dan Bickley of The Arizona Republic. Sarver said Markieff, like many millennials, can’t recover from “setbacks,” like losing his brother in a trade.

Sarver, of course, is entitled to his own opinions, but the larger point is that the team’s owner is calling out a key player, under contract until 2019, who ESPN’s Zach Lowe reported has virtually no trade value.

The Suns, like many teams, will have cap space this summer when the NBA’s salary cap is expected to jump as a result of a new TV deal. However, they’re financially committed to this core of players that doesn’t seem to fit. The foursome of Bledose, Chandler, Knight, and Morris are slated to make a combined $48 million next year, and all are under contract until at least 2019.

While cap space is a precious commodity that could help the Suns mold a better team, it’s also less advantageous when the rest of the league has it. Moving on from that core will be difficult as Bledsoe, an athletic guard, comes off his second serious knee injury. Chandler is 33, owed a lot of money, and looks like a shell of his former self. Morris, as mentioned, has little trade value.

The Suns’ current woes also make last year’s trade for Knight that much more important. The Lakers will likely keep the aforementioned draft pick since they’re heading for a top-three pick, but next year, that pick is no longer protected. The Suns, had they kept that pick, could be hurdling toward two high lottery picks in the same draft, plus cap space. They still have their own pick, which looks like it will be high in the lottery, and cap space, but the light on the horizon is dimmer this season.

Had the Suns not had the fortuitous 48-win season two years ago, it’s fair to wonder what they’d look like today. Sarver told Zach Lowe, “We were never trying to lose games. We were trying to play young players who we thought could be part of the next great Phoenix team, and some of them just played a lot better than we thought they would.”

The Suns didn’t have to tank to get better, but instead of going through a slower rebuild with more draft picks and further analysis on what players fit, they doubled down on a roster after a surprise season. Now, they don’t just have to rebuild, it appears they’ll have to tear down some of what they built just to start from scratch.

NOW WATCH: 2015 was an incredible year for bizarre championships