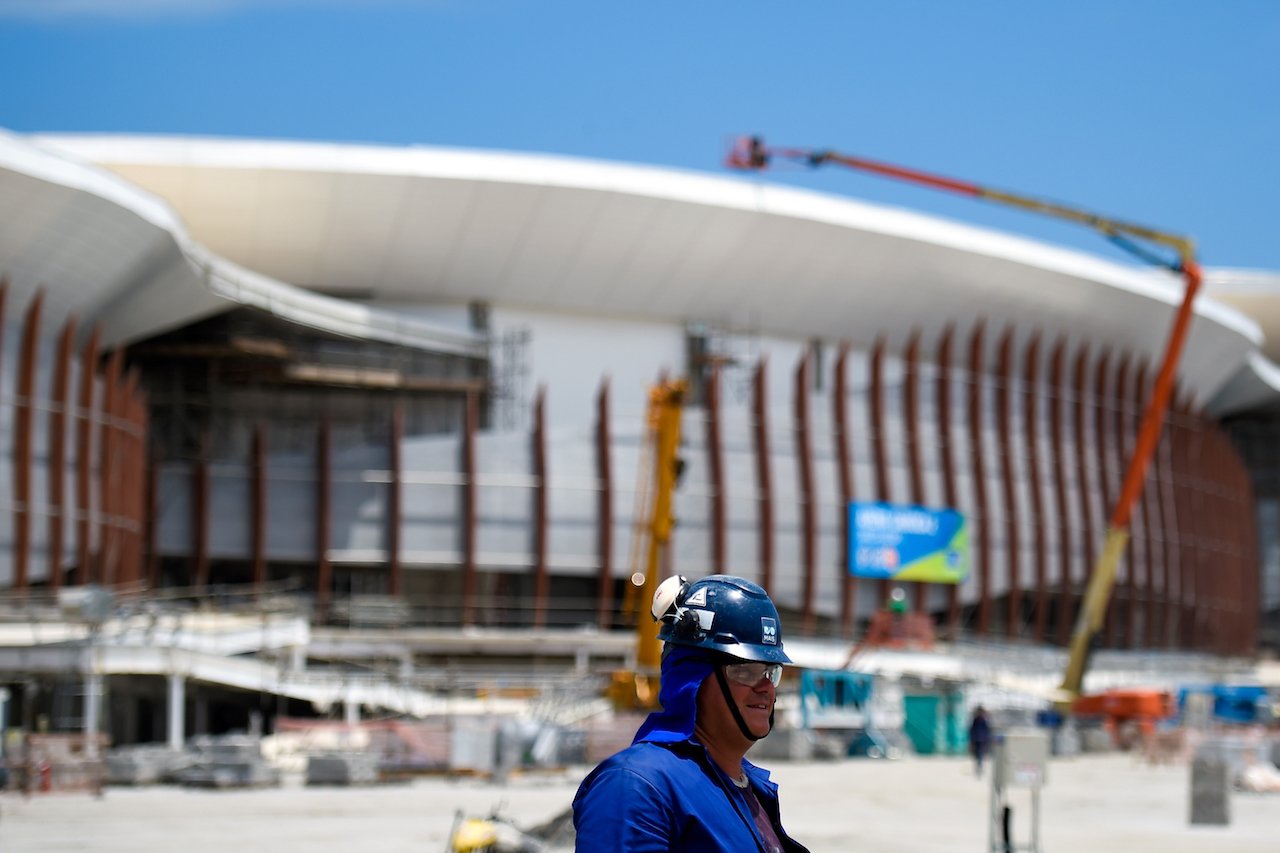 Buda Mendes/GettyA construction worker on site at the Carioca Arena 3 at the Olympic Park.

The 2016 Summer Olympics kicks off on August 5 in Rio de Janeiro — but with less than seven months until the Opening Ceremony, a slew of problems still show no signs of improvement.

Will Connors had a good, if troubling, piece in The Wall Street Journal on Tuesday laying out the concerns in Rio.

The list of concerns appears to be trending in the wrong direction as the Games draw closer.

Let’s break down the biggest problems:

Rio is racing to build a 16 kilometer subway extension from the city’s center to the Olympic Park, which Connors reports will carry some 300,000 fans each day to the game’s events during the Olympics. This construction reportedly needs somewhere in the ballpark of $247 million U.S. dollars in federal funds to be completed, but Brasilia, the nation’s capital, is currently distracted by corruption scandals and ongoing impeachment proceedings against president Dilma Rousseff.

What’s more, the subway extension is set to open on July 1. The Games begin on August 5, leaving a small window of time for the city to smooth out inevitable kinks in the new infrastructure. Worst of all, as a spokeswoman told Connors that if the extension isn’t ready, there is “no plan B.”

Multiple diseases are spiraling out of control in Brazil, spreading faster than officials efforts to combat them. Writes Connors:

As of early December, a record 1.58 million cases of dengue fever were reported in Brazil in 2015. Chikungunya is mushrooming too. Most worrisome is a relatively new, fast-spreading virus called Zika. Authorities estimate it may have infected as many as 1.5 million people in recent months and has been linked by some health officials to nearly 3,200 cases of infant brain damage. While Zika has hit hardest in the Brazil’s poor northeastern region, it’s spreading quickly in Rio de Janeiro state.

The concerns here are self-explanatory. If dengue fever, Chikungunya, and Zika all continue to spread to Rio, this will only deter more fans from making the pilgrimage to Rio to watch the Games.

A ballooning budget in the wake of a national economic crisis

Connors reports that in 2015 the total infrastructure cost for the Games — funded predominately by federal and local governments — rose by more than $5.9 billion U.S. dollars, 25% higher than planned. In a country still grappling with a recent economic crisis, spending public money on a two-week event is certainly not ideal.

And, the economic crisis is forcing officials to cut corners. From Connors:

The committee said in October it would slash expenses by 30% through steps including cutbacks in high-end cuisine for VIPs and a reduction in the number of volunteers trained to assist visitors. Temporary tents will be used at certain sites in lieu of more durable structures.

The Opening and Closing Ceremonies are also expected to be less lavish than those of the London and Beijing Summer Olympics. The most talked-about scandal leading up to the Olympics has been the two polluted bodies of water (Guanabara Bay and Rodrigo de Freitas Lagoon) in which athletes will compete, and they are showing no signs of improvement.

Several athletes in Rio training on the waters in preparation for the Games have gotten sick, including a German sailor who contracted MRSA.

Kristina Mena, an expert in waterborne viruses, told the AP in December, “The levels of viruses are so high in these Brazilian waters that if we saw those levels here in the United States on beaches, officials would likely close those beaches.”

Connors explained that conditions aren’t going to get much better over the coming months:

Plans for sewage treatment never materialized. Instead the government is using stopgap measures like small “eco-boats” that move around the bay and collect larger pieces of debris.

Very few Brazilians appear to have interest in the Olympics, at least according to ticket sales. As of December 31, Connors reports, less than 50% of the 4.5 million domestic-market tickets had been sold. This is especially worrisome because the organizing committee is relying on these domestic ticket sales to meet 17% of its budget needs.

And as a result of all the aforementioned problems, many the result of the economic crisis, Brazilians are growing increasingly fed up with the Games. Small protests have already been held, Connors reports, and analysts predict larger demonstrations to be held closer to the Opening Ceremony.

The myriad problems surrounding Rio’s preparations for the Olympics will likely bolster the argument that it’s simply never worth hosting the Olympics.

NOW WATCH: A 2016 Rio Olympics water venue is full of human waste and teeming with viruses — here’s a video of what it looks like