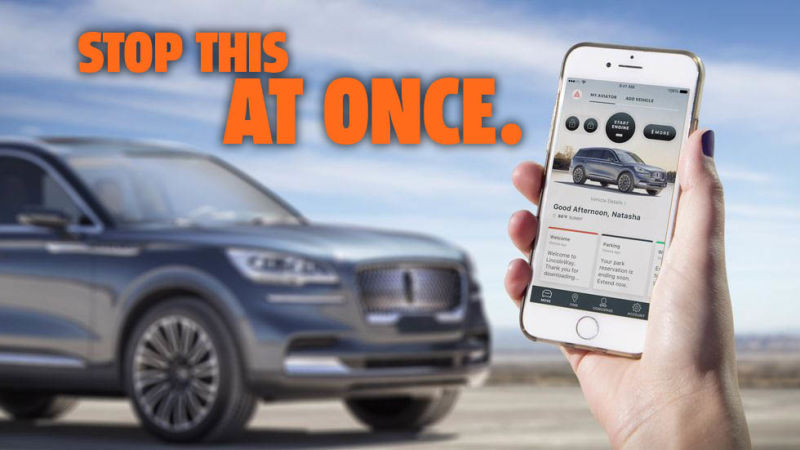 People generally seem to be on board with the new 2020 Lincoln Aviator. I know I am. It looks great, is probably real comfortable and comes with a ton of power. But it also has a Phone As A Key feature, which is a terrible idea and a trend I wish automakers would drop altogether.

Lincoln’s Phone As A Key uses a Bluetooth connection to pair with your smartphone. Using the Lincoln app, the system “enables certain features using the embedded modem or Wi-Fi, from a distance, the low-energy connection works even in areas where there isn’t a cell signal, like an underground parking garage,” according to a press release.

It’s compatible with iPhones running iOS 9.0 and up and Android phones. You can use the feature to unlock and lock the car, start the engine, open and close the windows and lift-gate, view car info and enable valet mode. The Aviator has 11 antennas in order to pick up the signal. Eleven!

There’s also a backup ignition passcode customers can use if the phone gets lost or the battery dies. And the Phone As A Key can be deleted from a phone “easily” with the app if a phone goes missing.

That all sounds fancy and high-tech, but what was so wrong with a plain, old car key that Lincoln felt the need to develop this feature? A car key is simple. It’s a physical thing you can hold in your hand and it’s only for your car. This new system sounds like it is needlessly complicated.

A car key will unlock or lock the car way more quickly than this app could. Think about the process.

And boom! You’re done. Two steps. Only one hand required.

How many steps are there for the phone key?

That’s two times as many steps, and arguably requiring both your hands. That, friends, is inefficiency.

Sure, it’s handy being able to open and close the windows and check the remaining gas mileage while away from the car, but those are all superfluous things that can wait until you’re in the driver’s seat.

On top of that, I think it’s safe to say that we are all on our phones way too much. Checking your phone has become the new societal yawn. If you see someone using their phone, then you get the urge to pull out your phone. Look up once in a while, man! See where you’re going. Enjoy the scenery. Don’t let Lincoln give us yet another reason to have our faces sucked into the little rectangles that own every other aspect of our lives.

This phone key feature was probably the thing I liked least when I spent almost a week with the Tesla Model 3. It was just too slow of a process. Too much hassle. Evidently, I wasn’t alone in my feelings because eventually, Tesla did start selling Model 3 key fobs.

Thankfully, the Aviator seems like it will come with a regular key because the phone key is just a feature, not a standard. Keys are good, especially ones that actually go into the ignition. We need to stop tying cars to smartphones. It’s better not to rely on one piece of technology for all of your daily needs. Keep it simple, and keep it analog if you can.

Maybe we should just say screw it and bring back number pads.