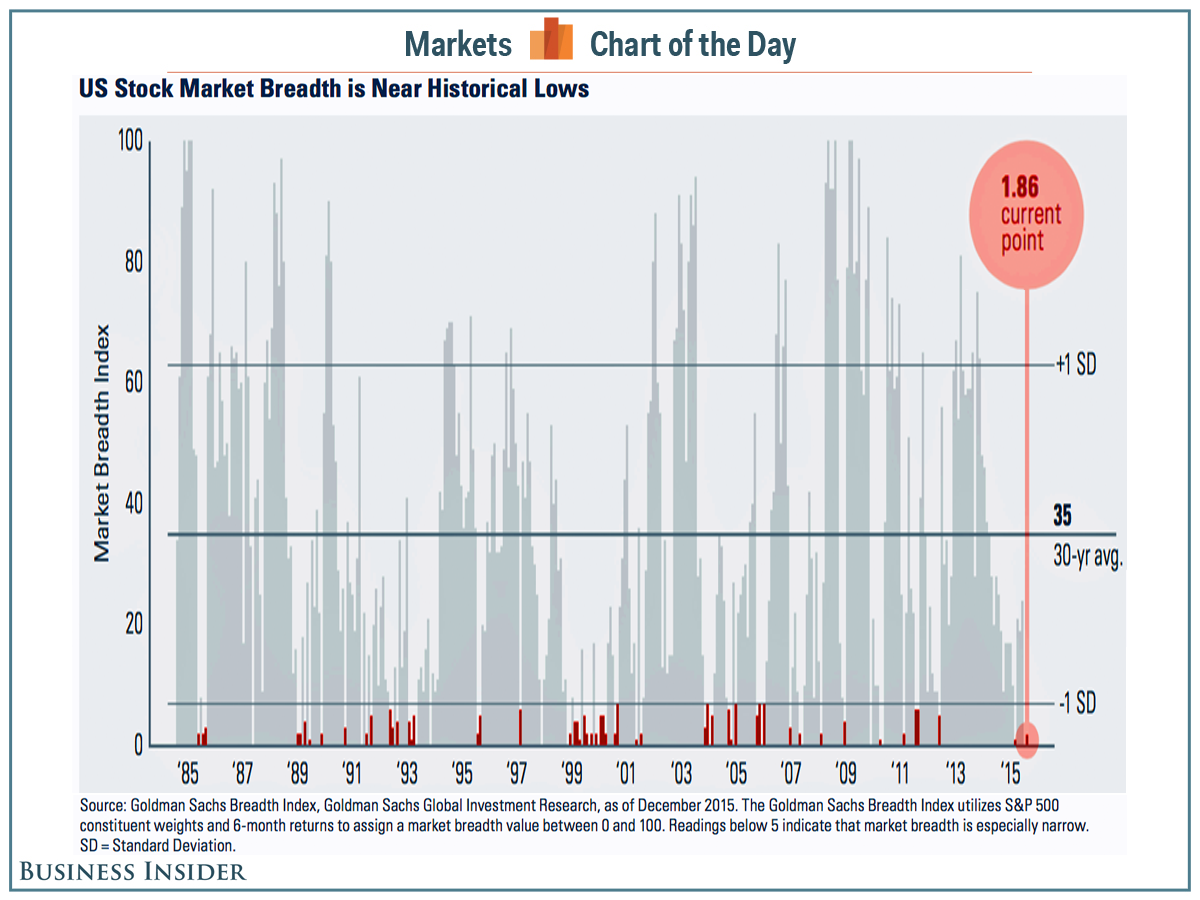 It would be doing much worse, however, had it not been for the heavy lifting of some mega-cap stocks. Consider Facebook, Amazon, Netflix, and Google, which are collectively being referred to as FANG.

Some folks are adding an “S” for Starbucks, which has a market cap of $87 billion and is up 44% year-to-date.

“Just five stocks with outsized returns accounted for the strong performance of the S&P 500; hundreds of others underperformed the broader market,” Goldman Sachs Asset Management analysts said in the firm’s 2016 outlook report.

They included this chart illustrating market breadth, which they calculated by considering the weight of each of the S&P 500’s stocks and the six-month returns generated. Because the S&P 500 is a market-cap-weighted index, big companies like Google and Starbucks have much larger impacts on returns than smaller companies like Electronic Arts, which has a 46% year-to-date return but a modest $21 billion market cap.

According to David Kostin of Goldman Sachs’ Global Investment Research team, the average breadth in this index is 35. A breadth of 5 is considered narrow. The index currently sits at less than 2. “Firstly, we need to point out that market breadth is NOT a predictor of subsequent stock market performance,” Morgan Stanley’s Adam Parker said in a Monday note to clients. “Sometimes it means the market will roll over, sometimes it means it will expand. Clearly, predicting the overall market level isn’t that easy. If it were, a lot of us wouldn’t have our current jobs.”

Notably, while narrow market breadth is unusual, it’s not unheard of.

“There have been numerous periods in stock market history when bundles of stocks trend away from the bulk of the index,” Jefferies’ Sean Darby observed in a November 30 note to clients. “The ‘Titans’ referred to a small group of large conglomerates while the ‘Nifty Fifty’ were a collection of growth companies that had a growing international footprint. The ‘dot coms’ relied on ‘capital light’ business models.”

According to the money managers at Goldman Sachs Asset Management, investors should consider this as they tweak their portfolios.

“Broadening leadership in the US equity market from an unusually narrow group of winners in 2015 could favor stocks currently trading below the market multiple and companies that can generate revenue growth,” they said.

For more on market multiples, read this.

SEE ALSO:Here are the best charts about the markets and economy we saw in 2015