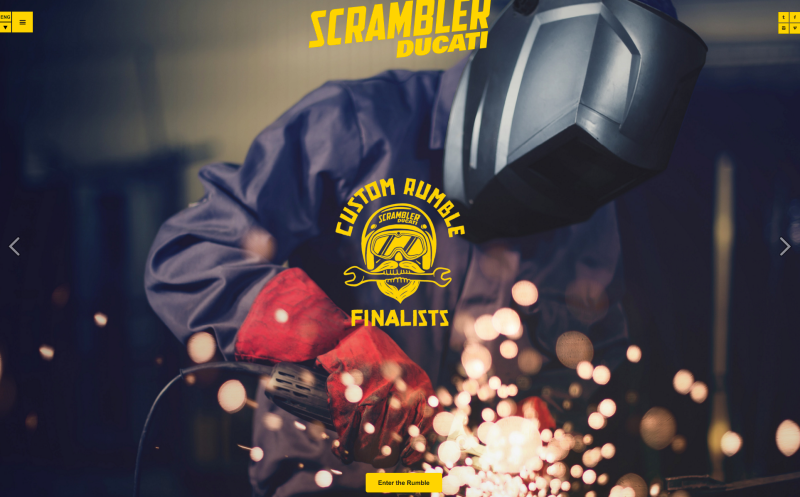 Unfortunately, the nice folks at MotoCorsa’s Hello Scrambler didn’t make it to the finals to represent the U.S. in the Scrambler Ducati Custom Rumble bike build contest, but here are the bikes that did. All of them are pretty badass, some more than others.

The funny thing about custom motorcycles is how often they end up looking so similar. When… Read more Read more

Unfortunately, not much info on the bikes has been given on Ducati’s Custom Rumble website, and voting is currently being held on the @CustomRumble instagram page.

This is probably my least favorite of the finalists, and it appears as if it’s basically been fitted with parts from the Ducati catalogue and some studded ice tires. Outside of the tires, it doesn’t feel as special or worthy of special attention to me as the others.

Love the headlight, exhaust, tail, seat, and side cover, but what in the sam hell is up with that air filter? It looks like a big zit asking to be popped. The paint is cool for a show piece, but trying way too hard for something to ride around—but at least Poland tried.

Now we’re talking. Scramblarabia is the most classic cafe of the bunch, and is also my favorite. Love the frame/wheels color, love the tank, and love the seat. The number plate is a bit silly, but my biggest beef is with the tires and higher bars. The bars from the Full Throttle version of the bike make the ergos much better, and nothing about this bike screams “put me in the dirt.”

This one actually looks a lot like what I thought the Scrambler might look like when it was first announced. With lots of Rizoma Red bits added on, slicks, and other performance bits – this is a dark version of a standard bike made sporty.

Ahhh, yes. The Scramblegale. If I’m being honest, I saw the name before the bike and got immediately excited. What a great play on their names, and I started saying it in an Italian accent in my head. Then I looked at the bike closely… and hated it. Superb concept, but I would feel so stupid being seen anywhere sitting on this bike. It’s trying WAAAY too hard.

Go to the @CustomRumble Instagram page and vote with your likes on your favorite. The winner will be announced at World Ducati Week, which happens July 1-3.

Also, leave us your favorite things to love or hate about the bikes in the comments below.