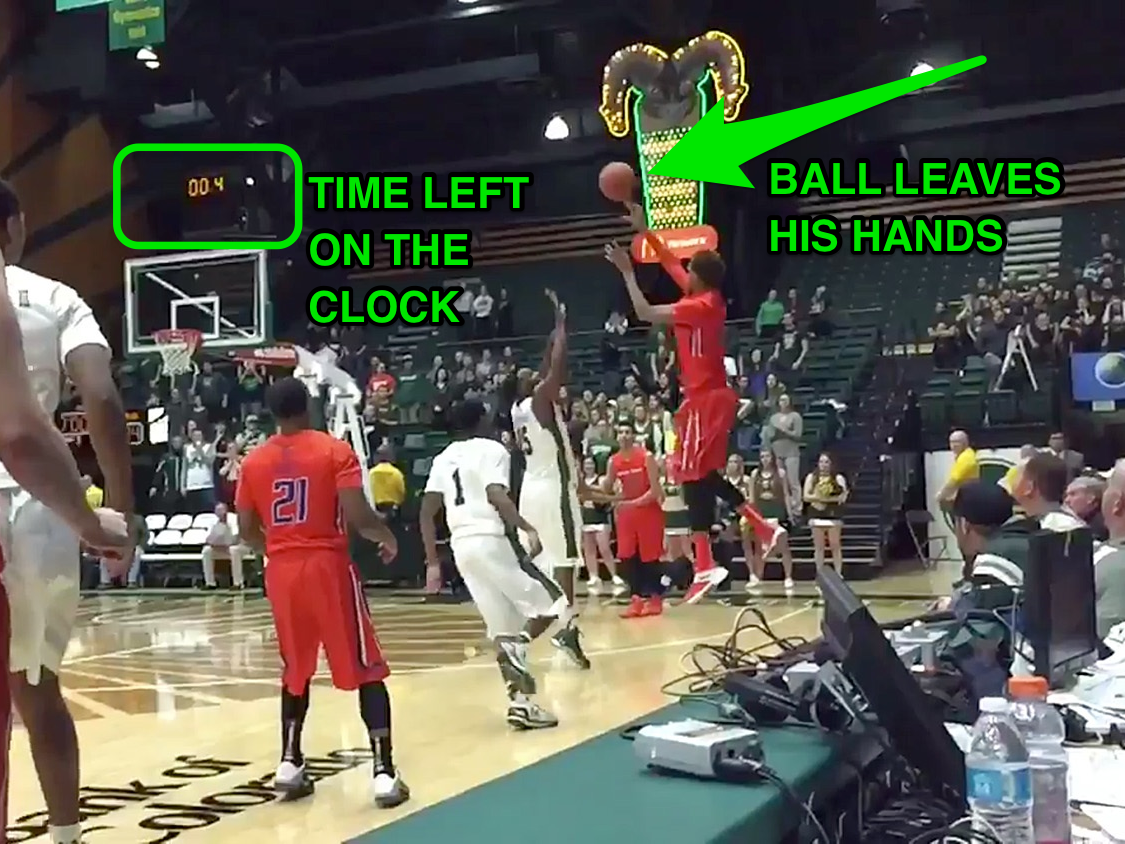 A bizarre and controversial decision by referees may have cost Boise State men’s basketball team a win Wednesday night against Colorado State.

With 0.8 seconds remaining and the game tied 84-84, Boise inbounded from just inside the half-court line and found James Webb III streaking to the sideline.

Webb caught the ball, took one step, then fired a fade-away three-pointer that banked in as time expired.

As referees typically do in these situations, they went and reviewed the shot to make sure it was good. In the meantime, Boise State celebrated and Colorado State seemed ready to leave the floor in defeat.

However, during review, the referees felt that Webb didn’t get the shot off in time and they waved it off.

Even more controversial, the refs used a stopwatch and compared it to the game clock. They determined it took Webb 1.4 seconds to get the shot off.

After the game, referee Dave Hall released a statement explaining the process (via Matt L. Stephens of The Coloradoan):

“The protocol on any last-second shot, after the shot is made, you go to the monitor to review whether the shot was taken in time or not. We followed the protocol, we went to the monitor and we reviewed whether the shot was taken in the 0.8 seconds that was on the game clock when the ball was inbounded. We did that and we noticed that the game clock was not started upon touch. We then used a stopwatch overlay from the monitor review system to determine when he touched it and then figure out how many tenths of a second it took from the time he touched the ball until the time he released the ball and whether he was able to get that shot off in that 0.8 seconds. After reviewing that several times we determined that the shot was late. It was not taken in that 0.8-second time frame, but actually closer to 1.2 or 1.3 time frame. As a result, the basket does not count.”

Here’s a slow-motion video of the shot, which shows the ball leaving Webb’s hands before the light goes off:

And here’s ESPN’s timer, showing Webb got off the shot in 0.7 seconds:

So, with the shot waved off, the game continued. It went to double-overtime before Colorado State pulled away with a 97-93 win.

“I’ve never seen anything like it, I don’t think we can just make up timing rules. Hopefully the (Mountain West) conference can explain it to me, because I guess I’m ignorant to what you can do and what you can’t do. They don’t hand time things in the Olympics anymore.”

He added, “I’m proud of the team, there were just some things they couldn’t control. We won that game, far as I’m concerned.”

Montigo Alford: “footage doesn’t lie, Derek Fisher got one off in 0.4 seconds.”

Senior guard Anthony Drmic sounded off on Twitter, too:

Everybody knows I don’t let my emotions run much on social media, but when players on the opposing team…

say we got cheated how can I not. Waste of time of effort. @espn@moutainwest

There’s good reason for Boise State to be upset by this. Throughout games in both college basketball and the NBA, time is judged by the game clock and the clock operator, whether it’s starting the clock when the game begins or on simple inbounds play.

To suddenly challenge the clock’s timing is to make the game clock and clock operator seem imperfect, and it becomes even more puzzling when refs do so by using a stopwatch that they operate. It will be interesting to see if the NCAA weighs in on this issue because it could open the door for more controversial scenarios in the future.