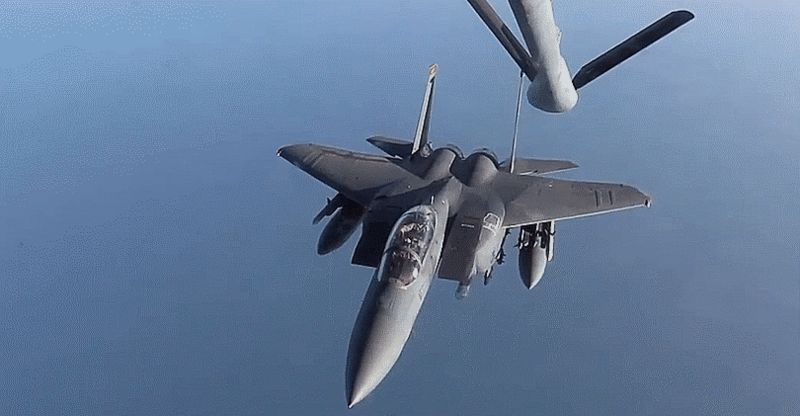 The coalition is stepping up its air strikes against ISIS in Iraq and Syria, with B-1s supporting Iraq’s Ramadi offensive and land-based fighters, and those from both the USS Harry S. Truman and the Charles de Gaulle, flying ‘round the clock sorties. Here are two of the latest videos depicting the coalition’s air war against ISIS.

The USS Harry S. Truman just arrived in the Persian Gulf, but its aircraft and aircrews are already deep in the fight. In the video below you see night operations aboard the ship, including the launch of a F/A-18F in “Five Wet” tanker configuration, and the prepping of various weapons before being loaded onto aircraft.

An Iranian rocket landed just 1,500 yards off the starboard side of the the Nimitz Class super… Read more Read more

The next video shows a wide array of aircraft that U.S. tankers are refueling on any given mission. USAF F-16CMs, F-15Es, B-1Bs, RAF Typhoons, and an Australian E-7A Wedgetail can be seen taking their turn at the aerial pump. Yet most interestingly, a USAF EC-130H Compass Call is shown getting gas as well. This rare and somewhat shadowy aircraft performs a unique standoff electronic warfare mission, being able to locate and jam enemy communications and air defense systems. It is likely that in this case the EC-130H is making command and control very challenging for ISIS fighters and possibly assisting in locating key high-value targets so that armed aircraft can take them out in quick order.

When it comes to weaponry, in both videos the venerable AGM-65E laser Maverick and the GBU-54 500lb Joint Direct Attack Munitions and dual mode laser JDAMs are clearly the weapons of choice for American jets striking ISIS targets. They Typhoon can be seen loaded with GBU-12 Paveway IV dual mode laser and GPS guided bombs.