It is still a tough time to be an investor whose preoccupation is finding cheap stocks.

Value investors, as they’re called, caught a break last year when their factor returned to favor amid an underperformance streak that had largely been in place since 2007.

The sudden rotation led quantitative-investing heavyweights to call for a prolonged value comeback. They included Marko Kolanovic, JPMorgan’s global head of macro, quantitative, and derivatives strategy, who expected that the shift to value would persist into Q1 2020.

He had identified a gulf between value’s lag on one hand, and the outperformance of factors including momentum — which lifted many fast-growing technology stocks — and low volatility. Kolanovic even called the expected convergence between these factors a “once in a decade” opportunity.

But the gap has only gotten wider since last July and is now twice as large as it was during the dot-com boom. Value is still out of favor, while low-volatility and momentum-driven technology stocks are all the rage.

“We caution investors that this bubble will likely collapse, i.e. this time is not ‘different’, with valuations reverting closer to 2010-2020 average,” Kolanovic said in a recent note to clients. 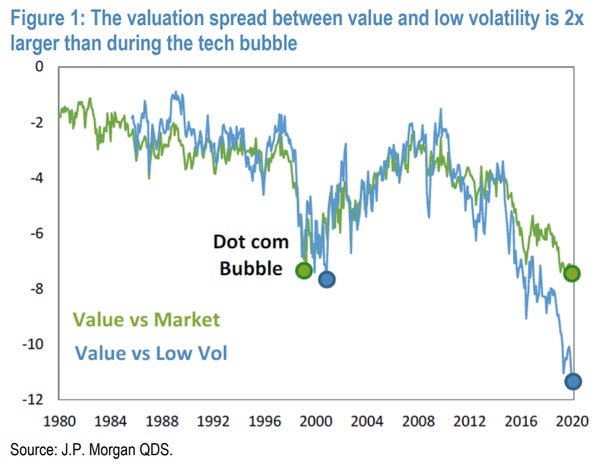 Kolanovic went further than declaring an “equity factor bubble” to explain what is behind its expansion.

He cited the coronavirus outbreak that has slowed pockets of the global economy and raised concerns about further weakening.

Investors are responding to the epidemic by shunning cyclical sectors of the economy like energy and heading for the safety of Treasuries and the fondness of tech stocks. Consequently, the performance gap between energy and tech stocks is also as wide as it was during the dot-com craze — yet more evidence of a factor bubble in Kolanovic’s book.

Apart from this very recent development, the ongoing boom of passive investing is contributing to the bubble, Kolanovic said. That’s because indexers tend to pile into the mega-cap, momentum, and low-volatility stocks that are already outperforming.

One final trend contributing to the factor bubble is the boom of funds geared towards environmental, social, and governance standards. Kolanovic found that these investing instruments are highly correlated with low-volatility and technology. Indeed, a recent RBC Capital Markets analysis of active ESG funds found that seven of the 10 most popular stocks were in the tech sector, including favorites like Microsoft and Alphabet.

With all the factor-bubble drivers established, where might the prick come from? Kolanovic singles out the containment of the coronavirus epidemic as the catalyst that will drive another sharp rotation to value stocks.

“We reiterate our call to sell out of defensive assets and rotate into cyclical assets such as value stocks, commodity stocks and EM,” he said. “Risks to our base case include the potential for new epicenters of the disease and reacceleration of new cases.”