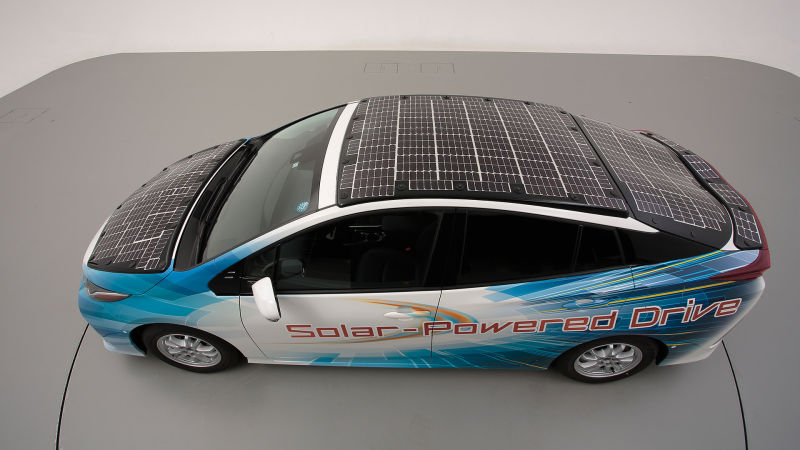 The Egyptian Sun God, known by the name of Ra, rules over all parts of the created world, and can be seen in the heart of the noon day sun. We owe all things to him, including enough power to drive this prototype Prius PHV about 35 miles per day. Toyota worked with Sharp and research organization NEDO to develop this rolling prayer to the Egyptian deity, and it seems pretty cool, actually.

To make this project a reality, Sharp supplied a new high-efficiency solar battery cell to be tacked onto the top of the Prius. This new energy transfer system allows for a more than 34% efficiency conversion, which is significantly higher than the solar cells used in Toyota’s current Prius PHV (sold in the U.S. market as the Prius Prime) system. Another major change is that this new system allows the Prius to charge while driving.

Toyota says the Prius Solar-Powered Drive can produce approximately 860 watts of power from the solar cells only. Later this month, Toyota will be launching a handful of these solar cars for public road trials in Japan. The aim is to test cruising range, aerodynamics, and fuel efficiency in regular use.

While the PHV remains a regular plug in hybrid with a gasoline engine, as well as the ability to charge overnight, the solar cells may add enough to the car to significantly reduce charging and fuel usage. For example, AAA states that the average American drives between 26.2 and 31.5 miles per day. If the Prius Solar-Powered Drive was to take over your average daily commute, and given a bright and sunshiney day with the car parked in the sun while you’re at work or home, it’s possible those could be zero impact driving days. No charging, no gasoline. Wouldn’t that be nice?