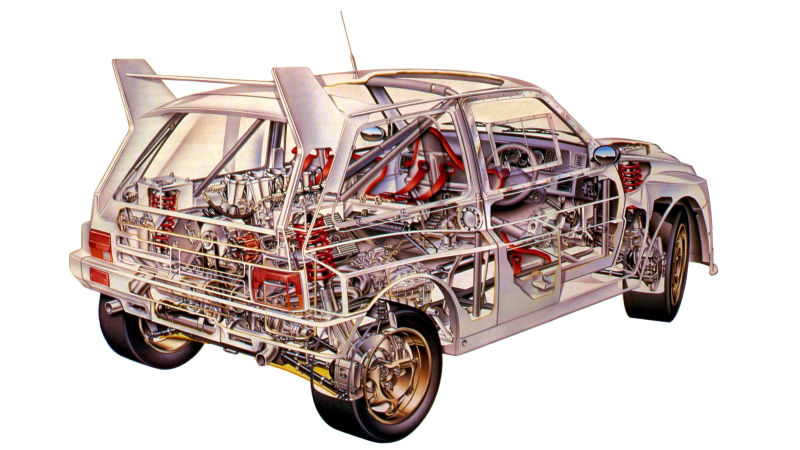 I’ve been hearing a lot of griping about how the new Ford GT doesn’t have a V8, and that V6s are never cool, can never be cool, have never been cool. Well, listen to the unholy roar of this ugly little British hatchback and think again.

“What if we just threw out all the rules?” is the familiar refrain to anyone that’s heard an…

This is the MG Metro 6R4. It was Austin-Rover’s entry into the hotly contested Group B field, and it was very representative of Austin-Rover’s state of affairs.

The base car was the MG Metro, a car that seems like it was designed by someone who actively sought to quash interest in cars as a whole. Friend of Jalopnik Jamie Kitman imported one, in a kind of hospital lunch tray beige, and it looks more like a fake car than a real one.

The Metro 6R4 didn’t exactly make the car more beautiful, adding jutting wings front and rear, along with oddly-moulded box flares and side intakes. Those side intakes are why this car is one of the coolest made in the modern era.

Like the contemporary Peugeot 205 T16 and the Renault R5 Turbo before it, the Metro 6R4 stuck its engine behind the driver for better handling. Everyone learned a quick lesson from the Audi Quattro that sticking a big engine in the front of your car makes it drive like an upside down baseball bat.

“I know it’s an ugly beast,” driver Tony Pond once said about it, “but the 6R4 is easily the best rally car I’ve ever driven.”

What set the Metro 6R4 apart from its rivals was, well, first, that it was British, so the English-language press endlessly fawned over it, and second, that it wasn’t turbocharged.

This was the 1980s, remember. It was the turbo era. F1 cars were putting down four-figure power numbers. Your new blender had a “turbo” button on it. Everything was turbo, and anything that wasn’t wanted to be.

So what was so good about the 6R4’s engine that it wasn’t turbocharged? It was basically a Cosworth DFV minus two cylinders. The Cosworth DFV was probably the greatest Formula 1 engine ever made, astoundingly successful, durable, and popular.

The V64V, as the new engine was called, weighed 314 pounds, had a 90-degree vee, four valves per cylinder, 3.0-liters of displacement, and made up to 410 horsepower, per 6R4.net. Redline was apparently 9,000 RPM, as Rally Group B Shrine recalls. Six cylinders breathing through six individual throttle bodies.

What I care about, though, is how it sounds.

I’ve been lucky enough to hear these things in person. The tone is so complex. Waves of sound rolling over each other. Buzzing. Roaring. Howling. To crib from the great description of the Matra V12, it sounds like power.

It actually made good power (and still sounded wonderful) after Group B was cancelled and it got a second life in rallycross. Supposedly turbo versions were making in the neighborhood of 700 HP.

So the next time someone gripes that V6s aren’t ever cool, or can’t ever sound good, send them a clip of the Metro 6R4. It’s ugly, it never won a WRC title, but it was incredible.