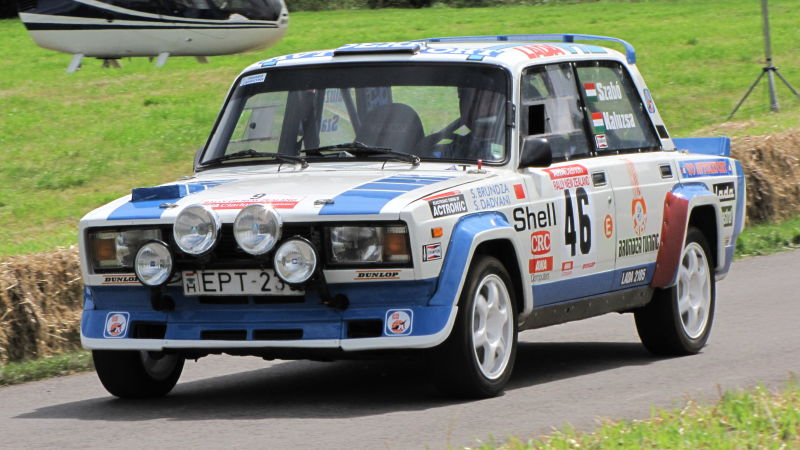 Group B’s popularity wasn’t just apparent from the huge crowds filling every stage. It was apparent from who was getting involved. Sure, there were some oddballs like Ferrari and a Citroen BX, but there was one that should’ve been ideologically opposed to the whole idea as an example of decadent bourgeois capitalism. This is the Soviet-built Lada 2105 VFTS.

The Lada VFTS wasn’t competing in the big, crazy Group B, the domain of Ford RS200s and MG Metro 6R4s, but in the Group B/10 sub-class for cars with engine displacements between 1.3 liters and 1.6 liters. (This section of Group B is probably best remembered for the not-Soviet-but-also-communist Škoda 130 LR, which was even more antiquated with a rear-engine layout.) Even then, just the notion that this Lada existed at all is wild.

Consider that it was racing during the Soviet war in Afghanistan, the Chernobyl nuclear meltdown, glasnost and perestroika and generally a complete collapse in the Soviet economic, political, and societal systems. There was never a time when the Soviet Union was a serious contender in the world of fun performance cars, let alone actual motorsports. And the 1980s was definitely not a time for that sort of thing in the USSR, what with the communist world melting down right alongside the nuclear reactor.

So it’s a bit fascinating that the VFTS even exists. And since it was created behind the Iron Curtain, much of the history behind it is a bit murky. But we’ll try our best here.

What is known about the VFTS is that it was a project of possibly the greatest Soviet race car driver of all time, Stasys Brundza. Brundza wasn’t just a multi-time Soviet champion, he also competed on the global stage. His full results, while unimpressive at a glance, belie the odds, as Petrolicious briefly mentioned in an article about a Hungarian vintage racing meet almost five years ago:

The organizer also invited a hero for the car enthusiasts to the event: Stasys Brundza made demo runs with his 1982 Group-B Lada VFTS rally car. His name is not as well-known overseas, but the Lithuanian sportsman was the Eastern Bloc’s most famous car racer, a ten-time Soviet Rally Champion and one of the inventors of the famous Lada VFTS race cars. Brundza finished sixth overall on the relentless, 716-kilometers-long 1976 Rally Acropolis with a Lada against Stratos HFs, Renault Alpines etc. ﻿

Here’s a video of Brundza himself starting one up:

VFTS doesn’t stand for “super crazy speed” or “grand turismo” or whatever they were naming cars in the West at the time. VFTS, naturally, stands for “Вильнюсская фабрика транспортных средств,”or “Vilnius Vehicle Factory,” named after both the city in which it was based (Vilnius, Lithuania) and what it did (made cars), because this was the USSR and the naming conventions of the time and place dictated that things be a little on-the-nose.

If you look very closely, or not too closely at all, you can see that the VFTS was based on the Lada Riva, also known as the VAZ-2105, also known as a lightly modified license-built version of the Italian Fiat 124. But it wasn’t exactly a VAZ as the Soviet peasantry and workers got it, as totalcar.hu noted (Google translated from the original Hungarian):

This is nothing but the foundation of Lada 2105, fully racing car. Aluminum bonnet, door covers, luggage compartment for weight reduction. But then the glasses could not stay. In the past, the sides were swapped smoothly to the plexus – the front and rear windshields left from the glass – but today’s rules no longer permit the use of crisp materials, so they are now made of polycarbonate. The terrible size of the wheels, including plastic extensions, makes the appearance of the car brutal.

I’m not sure it’s the “terrible size of the wheels” that lend itself to the VFTS’ aesthetic brutality, or just the crushing weight of state-controlled enterprise, but with 160 horsepower under the aluminum hood it probably had a fun amount of go to it. And it wasn’t just a communist embarrassment, according to rallygroupbshrine.org:

The Lada 2105 VFTS competed in but a rare few World Rally Championship outings in the Group B era such as Finland’s 1000 Lakes Rally where it utterly dominated the B/10 class in 1986 by occupying the first 6 class positions﻿. Russian rally driver Igor Bolshikh would finish 18th overall and first in class. However, the car was more competitive in Eastern Europe’s national events where it led most events and clinched an extensive list of podium finishes.

The evidence would seem to indicate that a grand total of 30 “official” VFTS examples were built, but with the VAZ-2105 being ubiquitous (seriously, production began in 1980 and only ended in 2010, with slight variants ending production in 2012, and production numbers likely being so high that humanity has not yet devised the digits capable of truly capturing the amount of cars built), replicas are pretty much all over. Especially in Hungary, where you can find Lada VFTS examples still rallying and doing donuts and basically hooning around like crazy:

Of course, the VFTS wasn’t the only communist car that was supposed to be in Group B. It never made it, but rumors of a mid-engine Lada Samara abound.

We’ll get to that next year, once again on Group B-smas.