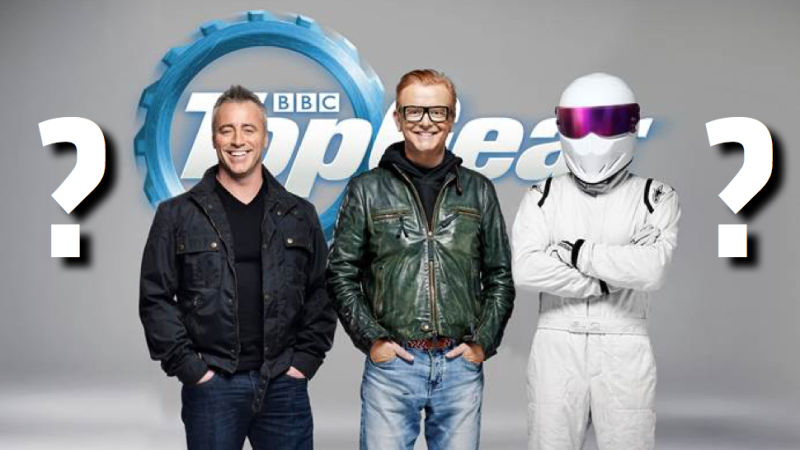 That guy who played the goofy one from Friends, also known as Matt LeBlanc, was today named as one of the new presenters of Top Gearalongside British radio DJ Chris Evans. Along with the Stig, that makes for three hosts. But according to our count, the final total amount of on-screen talent will be at least five.

How do we know? Well, this could be a bit of dumb pedantry, but the press release had an unusual line in it:

In case you didn’t catch it the first time, here the operative letter, now with emphasis:

The word “members,” particularly astute fans of the English language will note, is a plural word. Meaning that there is more than one on-screen presenter that is yet to be announced.

Crazy complicated, we know. But while we were a bit surprised by the announcement of LeBlanc as a Top Gear host, rumors have been swirling about other presenters, namely www.jalopnik.com’s own contributor Chris Harris, and person who drives around a track in Germany a lot Sabine Schmitz. Neither has confirmed their involvement just yet, but both have been unusually weird lately, with Harris keeping mum but shutting down the Patreon account funding his own videos, and Schmitz saying this in an interview with IMSA Radio’s Joe Bradley (via Road & Track):

Bradley: Now you’re going to be very busy, uh, filming…I’m from the UK, so I’m going to see you on my TV screen in the new Top Gear program. How’s things going with that?

Bradley: Oh really! You’re not allowed to tell us?

Schmitz: You know, I’m all the time with Top Gear, but not as an, um, host.

Which is a weird way to put things! If you weren’t going to be an on-screen member of Top Gear, it’d be easy to say “oh no, I’m not going to be a regular Top Gear person, but as fans of the show know, I do things with them all the time.” Instead, we got a “no comment,” followed by a “you know, I’m all the time with Top Gear, but not as an, um, host,” which just sounds like a very “it’s complicated” Facebook relationship status.

And sure, we can chalk it up to English not being Schmitz’s first language, if we’re being incredibly generous, but she seems to have no problem with it at all in her many television appearances.

So, with LeBlanc in, it doesn’t mean that Harris, Schmitz, or even Mickey Mouse is necessarily out. Nor does it mean that anyone specific is in, either.

But if we’ve already got three, and there’s more than one left to go, that makes a grand total of at least five Top Gear presenters.

I don’t know. Math was never really my strong suit. Or reading and writing words good.