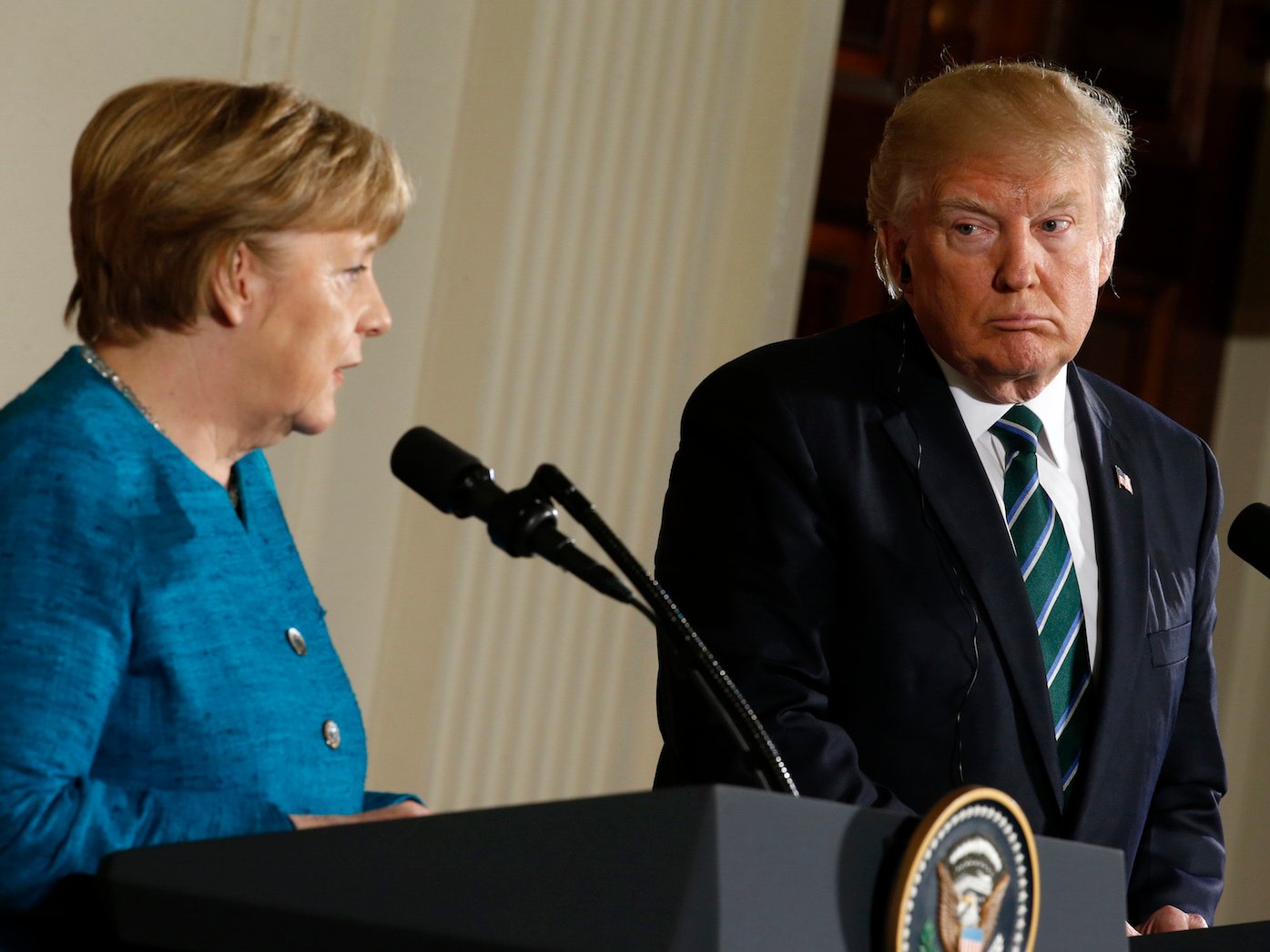 When Trump attacks Germany, he’s messing with the most important trade deal on the planet — the Transatlantic Trade and Investment Partnership (T-TIP).

Since 2013, the Obama administration has been tightening our economic relationship with the EU. It has been a controversial move, but it makes sense. The EU — as a block — is the richest entity in the world and together the US and the EU together make up 50% of global GDP.

This makes T-TIP the biggest deal in the world, and, the way the Obama administration told it, it has had an impact easing regulations for smaller businesses that normally wouldn’t get to trade outside the US.

So you would think that Trump, a supposed consummate dealmaker, would want to walk into this deal from a position of strength, but that’s not what’s happening. Thanks to Trump’s anti-Germany rhetoric, the US’s position in these negotiations is looking weaker and weaker.

“It’s no mistake that, while we withdrew from TPP” — the Trans-Pacific Partnership trade pact with Pacific Rim nations — “we did not withdraw from TTIP,” Ross said.

Yes, Wilbur, that is a fact.

But it may not get us anywhere, especially since Ross’ tepid remarks could be too late to cool hotter heads in Europe after his boss’ insults.

Now you may think to yourself — but Trump is attacking Germany, not the EU as a whole, this should be fine. But that’s not how this works.

“Germany basically surrendered much of its trade policy when it joined the EU, but Germany is the biggest economy in the EU and often dominant in trade and monetary policy,” Lee Branstetter, a trade expert and professor of economics at Carnegie Mellon.

Trump insists that Germany should negotiate one-on-one with the United States, and that its membership in the EU gives its economy an unfair advantage because it depresses the country’s currency. In other words, if Germany had its own currency it would be higher than the euro. But it doesn’t, so it’s not. Trump can cry all he wants about that, and so he is.

“When we’re toying with the Transatlantic relationship, we are toying with an important relationship. The more friction there is in the US Germany relationship the more difficult it will be to negotiate a TTIP favorable to the United States,” Branstetter said. “Even relatively modest increases in those flows can make a big impact.”

Stay away from the ledge boys, you might fall over

So can Trump’s rhetoric. Back in March when German Chancellor Angela Merkel met with Trump, she asked him to resume T-TIP talks. However, thanks to all of Trump’s protectionist rhetoric, some EU politicians have been ready to forget about T-TIP for as long as Trump is in power.

“As long as the US doesn’t have a clear trade strategy, it makes no sense to restart such an ambitious undertaking,” the head of the European Parliament’s trade committee, Bernd Lange, told Germany’s Handelsblatt.

Germany’s Minister for Economics, Brigitte Zypries, expressed a similar sentiment. On a recent trip to Washington, she had more to say about Trump’s laptop ban for Transatlantic flights than the biggest trade deal in the world.

“It is not likely the US will resume negotiations over TTIP,” she said in the German press. “We will not make the topic a focus of our discussions. There are more pressing issues with the United States.”

Another issue at play here is that, while Ross may be willing to start talking to the EU, there are more militant nationalist factions in the White House that are not interested.

The same person who told Trump that Germany could simply ignore its political structure within the EU and negotiate trade deals with the US directly would tell Trump not to negotiate T-TIP — and that’s National Trade Council Director Peter Navarro. He’s insistent on the idea that the US will only do bilateral deals, and he does not consider T-TIP bilateral, even though the EU trades as a single entity.

We should note that economists across the board generally agree that bigger multilateral deals are better for the economy than bilateral deals. They simply cover more ground and help prevent exactly what we’re experiencing in the Trump administration — massive wastes of time.

NOW WATCH: Former Navy SEAL commanders explain why they still wake up at 4:30 a.m. — and why you should, too