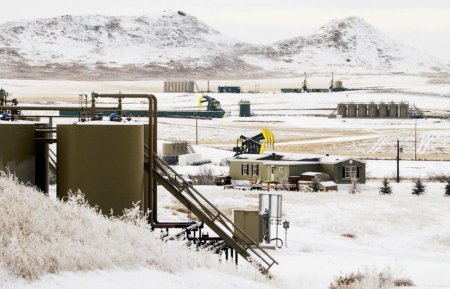 Thomson ReutersPumpjacks and other infrastructure for producing oil dot fields outside of Watford City, North Dakota

By Anna Driver and Ernest Scheyder

HOUSTON (Reuters) – Three major U.S. shale oil companies have slashed their 2016 capital spending plans more than expected in a bid to survive $30 a barrel oil prices, with one of them saying prices would need to rise more than 20 percent just to turn a profit.

The cuts on Monday from Hess Corp
, Continental Resources and Noble Energy ranged from 40 percent to 66 percent. This marks the second straight year of pullbacks by a trio of companies normally seen as among the most resilient shale oil producers.

The cuts were steeper than expected. Analysts at Bernstein Energy had forecast an average 2016 spending cut for the sector of 38 percent.

The reductions show budgets may shrink more this year than they did last year, when spending fell between 20 percent and 50 percent. Output at some companies may fall for the first time ever.

“It’s very rare to have spending decline two years in a row,” said Mike Breard, oil company analyst with Hodges Capital Management in Dallas. “Any budget you see published now is going to be much lower than last year.”

But last year many operators managed to lift output as they devised new ways to coax more oil from rock, a feat that seems unlikely to be repeated.

In a sign that a reckoning has come, Continental admitted it will pump about 10 percent less oil this year as it can no longer afford or innovate and sell more oil at depressed prices.

The U.S. government projects domestic crude output to fall by about 700,000 barrels per day (bpd) by the end of this year to around 8.5 million bpd.

“If you cut your budget 60 percent, you may drill 40 percent fewer wells and your production is going to drop a considerable amount,” said Breard.

Continental, North Dakota’s second-largest oil producer, said it would slash its 2016 capital budget by 66 percent. The company made the risky move of getting rid of hedges in the fall of 2014. [L2N15A2MB] Led by billionaire wildcatter Harold Hamm, Continental plans to spend $920 million this year, down from $2.7 billion in 2015.

Oklahoma City-based Continental said it will not become profitable until oil prices return to $37 per barrel. U.S. oil prices closed Tuesday at $31.45 per barrel.

Noble cut its quarterly dividend 44 percent and said it will cut spending about 50 percent this year. [L2N15A2MJ]

On the other end of the spectrum, Pioneer Natural Resources
, known for its aggressive hedging program, said this month it would spend between $2.4 billion and $2.6 billion this year.

Though Pioneer will fund its 2016 budget in part from a $500 million asset sale, the modest increase from $2.2 billion in 2015 makes the company a relative outlier at a time when most companies are trimming capex by amounts similar to last year’s drastic cutbacks.