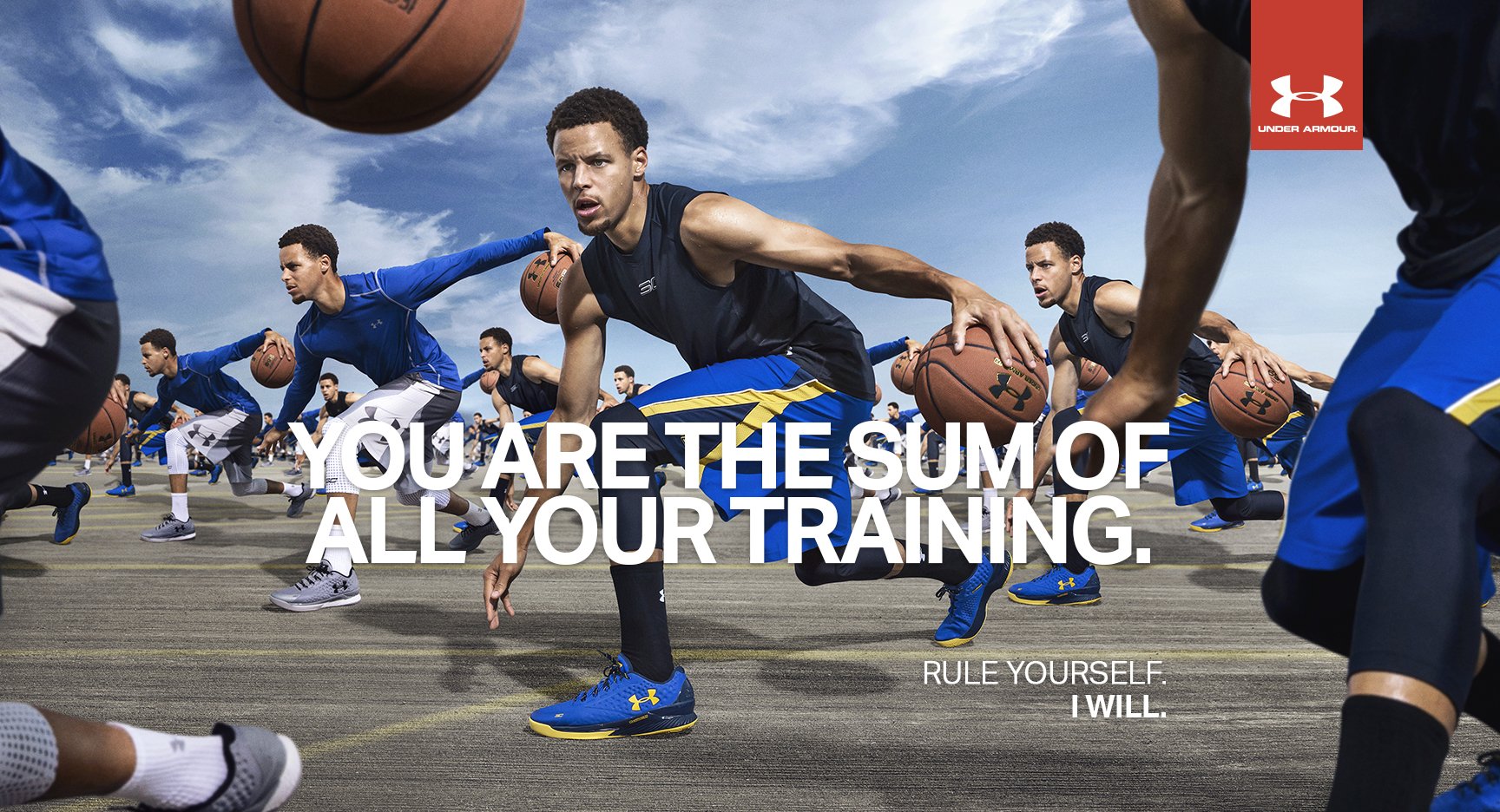 Under Armour, the third-largest sports apparel brand in the world, is launching its latest global brand marketing campaign on Tuesday.

The campaign, created by Droga 5, will mark the first time Under Armour has honed in on soccer in one of its global “holiday” campaigns, with one TV ad starring Manchester United player Memphis Depay. Under Armour internally calls these pushes its “holidays” — the two times a year it galvanizes behind a central idea that it thinks best represents the brand.

Another ad will star the USA women’s Gymnastics team preparing for the Olympics. Later in the year, the campaign will culminate with a short film starring Michael Phelps. Longtime brand ambassador Stephen Curry will also feature.

The tagline for the latest push is, “what you do in the dark puts you in the light.”

Adrienne Lofton, Under Armour’s senior vice president of brand marketing, told Business Insider the company internally pushes Malcolm Gladwell’s “Outliers” idea that to really hone a craft, it must be repeated again and again for 10,000 hours. But rather than repetition being boring and monotonous, the ad aims to make training, eating, and sleeping more exciting and emotional.

Lofton said: “It’s about what our young athletes do in the dark. That means this idea of maybe you can’t go to the party, maybe you can’t hang out, maybe you can’t do the things that everyday kids are doing, but you’re sacrificing those moments to really step into the light, to really get that win, and that championship moment that you really deserve.”

The holiday campaign will see Under Armour shift its media mix significantly. Before, the split between TV and digital ads was around 70/30, but now the sports apparel brand has upped its digital spend to about 50% of the total. Lofton said this reflects the changing viewing habits of its target audience, young adults.

Soccer, running, and basketball are the two categories where Under Armour has the most room for growth, Lofton said. A lot of Under Armour’s success in the basketball category — and beyond — can be largely attributed to the success of brand ambassador Stephen Curry on the court. Curry will also be featuring in the latest holiday campaign.

Lofton said the success of Under Armour’s athletes can be directly correlated with sales. Last year, when Under Armour launched the Curry 2 footwear product, not only did it “vaporize” from the shelves, but the entire footwear category shot up 95% as a result. Footwear is the “central opportunity for revenue growth for a performance brand,” Lofton said. Under Armour has an entire team of sports marketing experts whose job it is to evaluate and recommend athletes that have already arrived on the circuit, or up-and-coming athletes that make a good fit for the brand. The team seems to have a skill of picking out athletes just as they are on the crest of major success — beyond Stephen Curry there is golfer Jordan Spieth, who became world No.1 in August, and ballet dancer Misty Copeland, who became an ambassador and was named one of the world’s most influential women by Time Magazine shortly after, for example.

It clearly helps the bottom line too: Under Armour has reported 23 quarters of consecutive growth of more than 20%. The company aims to grow its annual sales to $7.5 billion in 2018, up from around $4 billion today.

Curry is the epitome of what Under Armour is searching for: An underdog, according to Lofton.

“We always talk about how Under Armour is aggressive and fearless. That idea of this underdog mentality, of you will always be your absolute best,” she said. “Stephen Curry was underweight, he is under-height, and he is the best basketball player in the world. He is self-described as an underdog and that’s why he’s got that chip on his shoulder that drives him every day to be the absolute best. That’s the Under Armour way. That’s why we’re the underdog and we’re proud to be.”

NOW WATCH: Here are the 4 best ads of Super Bowl 50