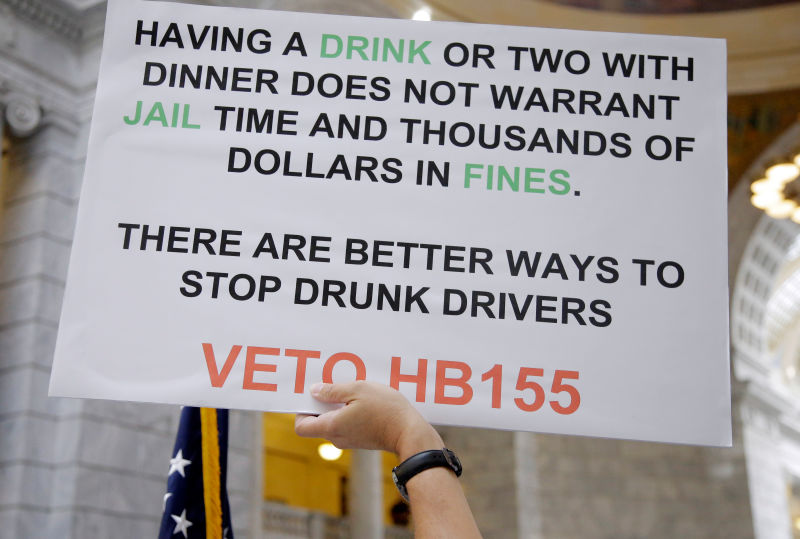 Utah governor Gary Herbert signed some of the strictest drunken driving limits in the nation into law yesterday, prompting protests from those working in the tourism and restaurant industries. The legal blood alcohol limit there is now .05 percent, as opposed to .08 percent in most places.

Gov. Gary Herbert signed the bill into law yesterday, and despite being the Mormon governor of a predominantly Mormon state—the denomination’s members do not drink alcohol—dismissed criticism that it was a “religious issue.”

“This is a public safety issue,” Herbert told the Associated Press. There’s not many Mormons in Rome, and they’re doing it there.”

This means that a man who weighs 150 pounds would be past the limit after two beers and a woman weighing 120 pounds would be over it after one drink, according to the American Beverage Institute, a national restaurant group. Of course, factors like food consumption could affect those estimates.

Supporters of the law include the Advocates for Highway and Auto Safety, who, according to the AP, say that this change is a “sensible solution” to discourage drunken driving.

Opponents of the law, who had pressed Herbert to veto the bill, believe that it would “punish responsible drinkers” and “burnish Utah’s reputation as a Mormon-centric place unfriendly to those who drink alcohol.” They also fear it would hurt Utah’s tourism industry from skiing and other activities.

The group went as far as to take out full-page ads in Salt Lake City’s two daily newspapers and USA Today, which includes a fake mugshot and text that reads, “Utah: Come For Vacation, Leave On Probation.”

The new law would take effect on Dec. 30, 2018, as the Associated Press notes, just before New Year’s Eve.

Deadpool Busted For DUI After Driving Onto Taco Bell Lawn