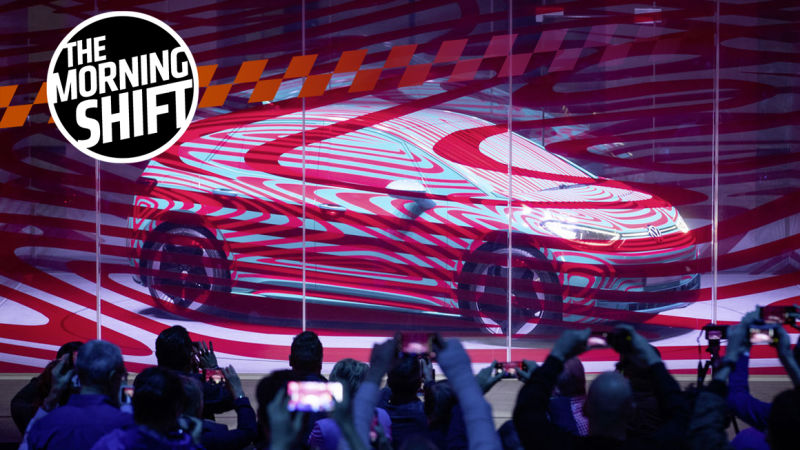 The Morning ShiftAll your daily car news in one convenient place. Isn’t your time more important?

There may be a day that Tesla looks back on all this—the Roadster, the S, those troublesome early Xs—and laugh at how simple it was. Volkswagen is rolling in. All that and more in The Morning Shift for May 15, 2019.

As Tesla gets its one factory in China set up, Volkswagen announced it will be setting up two, as Bloomberg detailed in a wire report this morning:

In about a year, Volkswagen AG may catch up to Tesla Inc.’s capacity to make electric cars.

The world’s biggest automaker said Tuesday it’s building two plants in China to produce a total of 600,000 vehicles on its dedicated battery-car platform, dubbed MEB. The new factories in Anting and Foshan will open a few months after Germany’s Zwickau, which will assemble as many as 330,000 cars annually and is slated to get started by year-end.

Following through with plans to reach this level of scale will likely leave Tesla trailing behind. Its lone vehicle assembly plant operating in Fremont, California, can make about 500,000 cars. The electric-car leader expects to start output on the outskirts of Shanghai at the end of this year and produce 250,000 vehicles a year initially.﻿

VW wasn’t finished. It also announced a billion-Euro plan for a battery plant, which is about $1.12 bn USD if you’re thinking about getting that changed that at the airport or whatnot. From Reuters:

Volkswagen workers backed a restructuring of the world’s largest carmaker on Tuesday after Chief Executive Herbert Diess pledged to spend 1 billion euros ($1.1 billion) on a new battery cell production plant near its headquarters in Lower Saxony.﻿

No report I saw had anything close to a firm plan on when this would all get finished. Still, it’s at least something, and I feel positive about anything that gets VW’s neat MEB all-electric platform on the road.

Volkswagen, the company that brought us Dieselgate, wants us forget its last eco-disaster by…

But then again, these are all things that VW wants to do, things it intends on doing. Tesla is already here, and hasn’t just spent a billion, it has spent billions and billions. But how long will it enjoy being the big fish in the small pond, with only weak efforts like the Chevy Bolt and the Nissan Leaf taking it on?

Last month marked the 10th in a row that the largest car market in the world declined, a “nosedive” of 18 percent, as Automotive News China reports:

Shoppers are also stay away from showrooms ahead of potential government incentives aimed at reviving the market, with China’s domestic brands being particularly hard hit.

Minibus volume picked up for the second consecutive month, rising 4.8 percent to approximately 40,800.﻿

Phew! Thank goodness those minibus sales are still plugging away.

Hyperloop is somehow still a thing, as Sean O’Kane at The Verge broke last night:

Virgin Hyperloop One has raised $172 million in new funding to bring its futuristic transportation dreams to life, according to new filings with the United States government. At least $90 million has come from existing investor DP World, a major Dubai port operator, The Verge has learned.﻿

Hyperloop had already raised some $295 million before this, as The New York Times had reported earlier this year.

Everyone has too much money, except for me, apparently.

The relationship between automakers and regulators in the United States is never anything I want to untangle at any time. Attempting to do so perpetually feels like banging my head into a wall.

It is with that in mind that I shall present this report from the Associated Press that NHTSA decided not to put in regulations seeking to prevent unintended acceleration because, apparently, carmakers got to the changes on their own first:

The U.S. government is withdrawing a proposal to require all passenger vehicles to have safety systems to prevent unintended acceleration.

The government said Monday the rule isn’t needed because the auto industry has installed systems voluntarily.

The industry opposed the rule. It was proposed by the National Highway Traffic Safety Administration in 2012 after a series of unintended acceleration problems with Toyota vehicles.

The agency says all 2018 passenger vehicles have systems that override the throttle if a driver presses the gas and brakes at the same time, and it doesn’t expect any automakers to remove the brake-throttle override system in the future.﻿

Ah, great. Glad that’s sorted out. Nothing could possibly be wrong with no outside oversight over this issue wait hold on let me just keep reading to the next paragraph of this report:

But Jason Levine, executive director of the nonprofit Center for Auto Safety, said it will take years to find out whether automakers installed the systems because of the pending rule. “With no requirement, the control system can disappear from future models or be sold as a luxury with no recourse for consumers,” Levine said.﻿

5th Gear: You Can’t Even Have A Party At Versailles Anymore Without People Thinking You’re Overspending And Detached

Carlos Ghosn was whacked I tell you! Whacked. But any public image rehabilitation campaign is going to have a hard time with this:

The video comes to us from Automotive News, with a full report:

A YouTube video of a lavish party given by Carlos Ghosn on March 6, 2014, at the palace of Versailles has drawn the attention of auditors investigating spending by the Renault Nissan alliance.

The party, which Ghosn and his supporters say was held for business purposes to celebrate the 15th anniversary of the alliance, was held on his 60th birthday and reportedly included few Renault or Nissan executives among the 160 celebrity guests.

The video has undercut efforts by Ghosn to improve his public image following his arrest and detention last November in Tokyo on charges that he concealed tens of millions in compensation — and more recently, that he redirected millions to himself via payments from Nissan’s “CEO fund” to a distributor in Oman.﻿

Look, who hasn’t hosted a lavish party at the most poignant symbol of excess and overspending?

Reverse: The Government First Encouraged People To Ration, But Then Had To Step In And Enforce It

On this day in 1942, gasoline rationing began in 17 Eastern states as an attempt to help the…

Neutral: Will VW Actually Get One Over On Tesla?

I feel like VW has the best plan of the major OEMs on going EV, but it also feels extremely hurried in the wake of Dieselgate. It could work, but I fear it could end up with a ton of very unreliable early cars. What do you expect will happen?