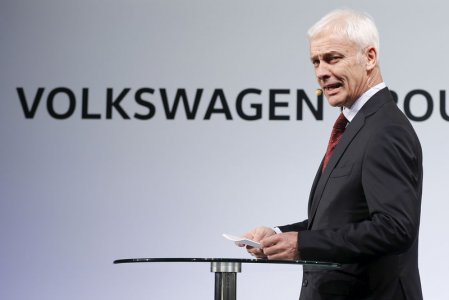 BERLIN (Reuters) – Volkswagen’s chief executive expects the carmaker to win back the trust of its customers following the emissions test-rigging scandal after its core autos division swung back to growth in January, German news agency DPA reported on Tuesday.

“We are quite confident that by regaining the trust of our customers, of the public and of our remaining shareholders, we will have a good year 2016,” Chief Executive Matthias Mueller said when asked whether the scandal was having an impact on sales and temporary jobs.

Deliveries at VW’s core autos division swung back to growth in January, helped by a double-digit rate of expansion in China, after suffering its first drop in more than a decade last year.

Sales at group level, which includes figures for brands such as luxury division Audi and Czech unit Skoda, also bounced back in January after posting the first decline last year since 2002.

Referring to the United States, where five months after its cheating was uncovered the carmaker is still to come up with a technical fix for almost 600,000 cars and is facing a growing number of legal claims, Mueller said: “We will certainly be a loser in the U.S.”.