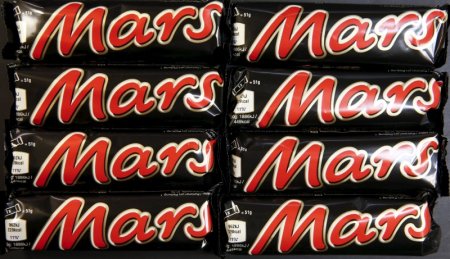 Thomson ReutersMars bars are seen in this picture illustration

FRANKFURT/LONDON (Reuters) – Mars Inc has recalled chocolate bars and other products in 55 countries, mainly in Europe, after bits of plastic were found in a Snickers bar in Germany, the U.S. chocolate maker said on Tuesday.

All of the recalled products, which include Mars, Snickers and Milky Way bars, were manufactured at a Dutch factory in Veghel, according to a Mars spokeswoman.

The recall follows a Jan. 8 complaint from a consumer in Germany, she said, who found red plastic in a Snickers bar and sent it back to the company.

Because Mars cannot guarantee there is no plastic in other products made at the Veghel factory, it is recalling everything made there during a specific period.

A statement posted earlier on the website of the Netherlands Food and Consumer Product Safety Authority said Mars was recalling Snickers, Mars, Milky Way, Celebrations and Mini Mix after a piece of plastic was found in one of its products that could cause choking.

Mars Netherlands said it was working closely with the Dutch food safety authority on the matter, according to the statement.

The privately held company earlier said it had recalled products in Germany.

“We want to avoid having consumers who bought one of the (affected) products consume them,” Mars said in a statement on its German website.

It said the recall affected all Mars and Snickers products, Milky Way Minis and Miniatures as well as certain kinds of Celebrations confectionery boxes with best-before dates ranging from June 19, 2016 to Jan. 8, 2017.

The company declined to comment on the financial implications of the recall.

(Reporting by Maria Sheahan and Hans Seidenstuecker in Frankfort, Martinne Geller in London and Thomas Escritt in Amsterdam; editing by Mark Trevelyan)