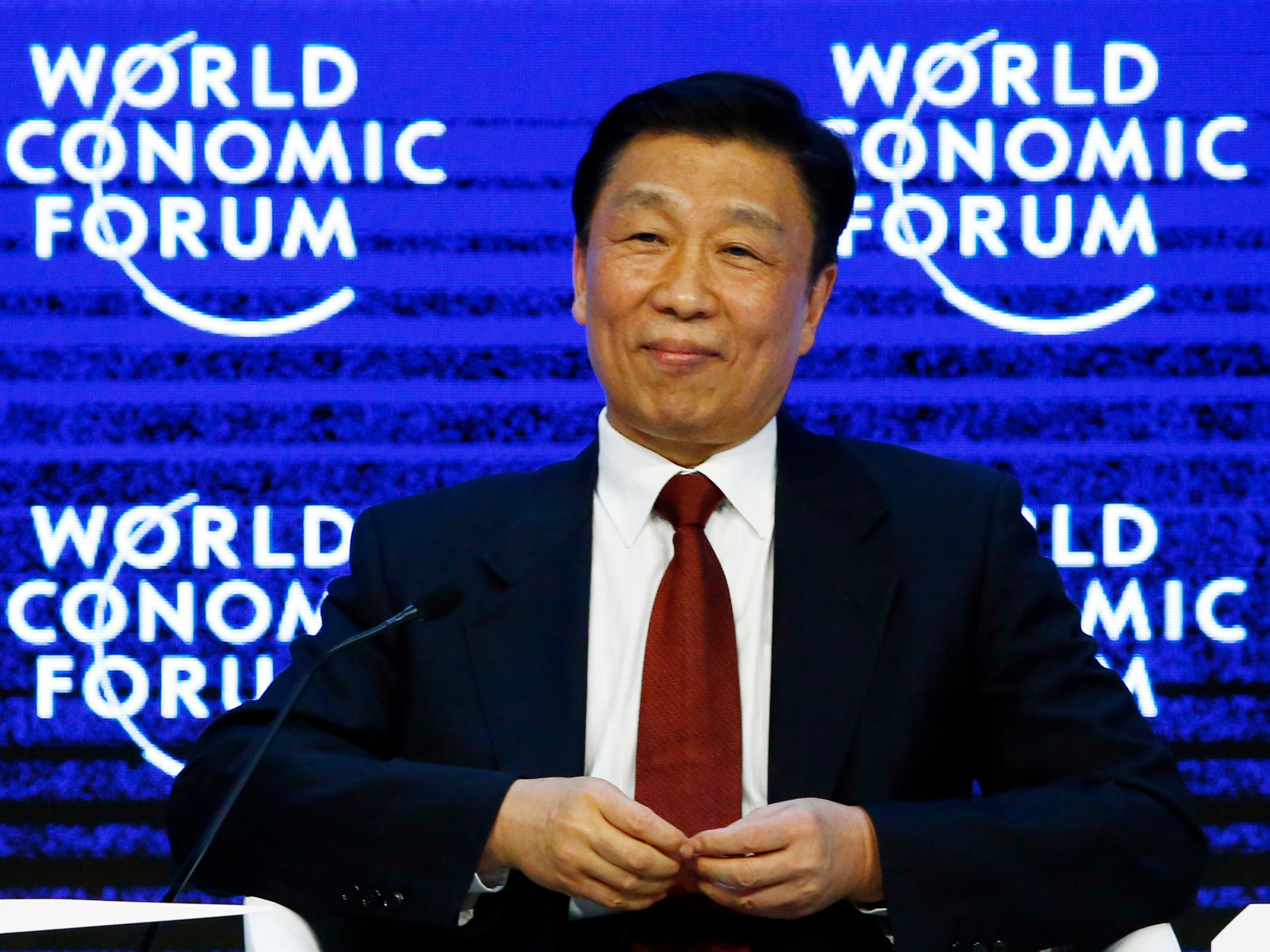 ReutersLi Yuanchao, Vice-President of China attends a session during the Annual Meeting 2016 of the World Economic Forum (WEF) in Davos, Switzerland January 21, 2016.

If you’re looking for hope for China, right now, this could be it

Bloomberg caught up with the Vice President of China at the World Economic Forum in Davos on Thursday, and he said something that has traders all over Wall Street rolling their eyes into the back of their heads.

“The fluctuations in the currency market are a result of market forces, and the Chinese government has no intention and no policy to devalue its currency,” said Li Yuanchao, China’s Vice President.

Now, given the fact that the yuan has been significantly weakening against the dollar since December, you can forgive traders for finding his comments less than reassuring.

But the key word here is intention.

The prevailing notion is that China is allowing its currency to depreciate in order to boost exports and hit the gas on a slowing economy. Its movements have been the catalyst for some of the whipsaw movements we’ve seen in markets since the beginning of the year.

The thing is, the exports narrative ignores what China has been doing with its economy for the last couple of months and what it’s trying to do longterm.

This is what China wants

China wants two things — to have a mature economy befitting its status as the second largest in the world, and to transition that economy from one based on investment, to one based on domestic consumption, without too many hiccups.

That is why the country held the yuan very steady this fall until it was initiated into the Special Drawing Rights club — a special group of reserve currencies designated by the International Monetary Fund — at the end of November. To be inducted, a currency has to be both widely used and stable.

After that, the yuan started sliding. At the same time, China’s economic indicators showed signs of a continued slow down. Then earlier this month, the government depreciated the yuan by 0.25%. Markets went nuts.

GOP Presidential candidate (and known economist) Donald Trump cried foul, saying that unless China stopped depreciating its currency to make its goods more competitive, he (as President) would slap a tax on Chinese goods.

But US Treasury Secretary Jack Lew thinks the yuan’s depreciation is due to a slowing economy, and that the world is confused about that because China hasn’t been clear.

“We have made clear to China over many years, certainly the entire time I’ve been Treasury Secretary, that devaluations that are designed to gain unfair competitive advantages are unacceptable and we will push back on that,” Lew told CNBC at the World Economic Forum at Davos.

“On the other hand, if your economy is slowing down and there’s a natural difference, you have to distinguish between the two…If they could be clearer about what they’re doing, I think that it will be helpful. I can’t tell you that I have 100% certainty of where they’re going. I can tell you what they’ve announced as their policy. I can tell you what they’ve said in meetings and I think their activities, their policies, and their communication have been confusing.”

This is what China has

There are a bunch of reasons for this, but chief among them is the government’s desire to prevent the most pressing problem with the country’s economy right this minute — capital flight.

According to a report from the Institute of International Finance, $676 billion left China in 2015. It’s a huge number. To put it in perspective, all emerging market economies together saw outflows of $111 billion in 2014. When the yuan depreciates, yuan holders have an incentive to exchange it for a currency that isn’t losing value. That market force only makes it depreciate more, and that’s bad for China because China has things to do with those yuan. It has a corporate sector to deleverage and restructure, it has a housing market to prop up, it has projects to fund.

And of course, conversely, if the yuan is steady, more people will buy or hold the yuan.

So no. The Chinese government has no intention of depreciating the yuan even though the market seems to be begging for it. It just doesn’t feel like that to traders getting up in the middle of the night to check its value.

Or to Donald Trump, for some reason.

SEE ALSO:This is the first thing investors should look at in the morning