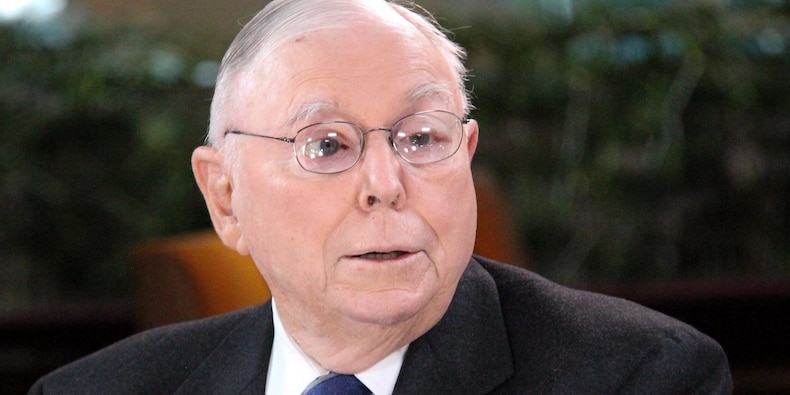 Charlie Munger, the vice-chairman of Buffett’s Berkshire Hathaway, is also the chairman of Daily Journal, a newspaper publisher and software developer.

Munger acknowledged that periods of mass speculation occur from time to time, and said his normal policy was to “ride them out.” He cautioned amateur investors and day traders against acting recklessly.

“Shareholders should be more sensible and not crowd into stocks and just buy them because they’re going up and they like to gamble,” Munger said. “That’s a very dangerous way to invest.”

Munger also compared the GameStop short squeeze in January to people gambling at the racetrack.

“That’s the kind of thing that happens when you get people who gamble the way they would betting on racehorses,” he said.

“It’s very dangerous and it’s really stupid to have a culture to encourage gambling in stocks,” he continued. “Of course that is going to cause trouble and it did.”

Munger also called out Robinhood and other trading platforms for “luring” novice investors into speculating on stocks.

“It’s a dirty way to make money and I think we’re crazy to allow it,” Munger said. “All this activity is regrettable, I think civilizations would be better without it.”

“Nobody should believe that Robinhood’s trades are free,” Munger said, adding that their practise of selling order flow was “dishonorable.”

The 97-year-old also called out the boom in special-purpose acquisition vehicles (SPACs), which offer an alternative way to go public by listing then acquiring a private company.

“Crazy speculation in enterprises not even found or picked out yet is a sign of an irritating bubble,” he said. “The investment banking profession will sell shit as long as shit can be sold.”

“I think it must end badly but I don’t know when,” he added.

“There’s no question that Wells Fargo has disappointed longtime investors like Berkshire. Because the old management were not consciously malevolent or thieving but they had terrible judgment.

“I don’t think bitcoin’s going to end up as the medium of exchange for the world. It’s too volatile.

It’s kind of an artificial substitute for gold.”

“People really trust Costco to deliver enormous values and that is why Costco presents some danger to Amazon. They’ve got a better reputation for providing value than practically anyone including Amazon.”

Munger was asked to choose the more astounding event, the stratospheric rise in bitcoin’s value or the astronomical rise in Tesla’s stock price over the past year.

He quoted author Samuel Johnson, who when presented with two choices, said, “I can’t decide the order of precedency between a flea and a louse.”

“I don’t know which is worse,” he added.

“I think Jack Ma was very arrogant to be telling the Chinese government how dumb they are. Considering their system that is not what he should have been doing.”

The rich getting richer during the pandemic

“That’s a misplaced concern. Nobody’s was trying to make the rich richer, that was an accidental byproduct of trying to save the economy under terrible conditions. It was probably wise that we acted exactly as we did.”

“Maybe the modern monetary theory is right. Put me down as skeptical.”

“I don’t mind a little inequality,” Munger said, describing it as an “inevitable consequence” of a growing economy.

“Any rich nation ought to have a social safety net that expands a little with its wealth.”

Munger bemoaned the rising amount of “hatred” in politics, but argued the country had been well governed for the past century.

“The system fo checks and balances and elections that our founders gave us actually gave us pretty much the right policies during my lifetime, and I hope that will continue.”

“I don’t know anything about Haven,” Munger said, referring to the joint healthcare initiative between Berkshire, JPMorgan, and Amazon that was dismantled recently.

The evolution of business

“Business success long term is a lot like biology. In biology, the individuals all die and eventually so do all the species. And capitalism is almost as brutal. Just look at what’s changed in my lifetime. Who ever dreamed when I was young that Kodak and General Motors would go bankrupt? It’s incredible what’s happened in terms of the destruction.”

“I think I had the right temperament. When people gave me a good idea I quickly mastered it and used it. It’s such a simple idea. Without the method of learning, you’re like a one-legged man in an ass-kicking contest.”

“It’s one of the most ignorant professions in the world,” Munger said, highlighting that many psychologists can’t connect what they know with other types of knowledge.

“If you have a fixable disadvantage, remove it, and if it’s unfixable, learn to live without it. What else can you do?”

“I think I’m not really equipped to comment on a subject until I can state the arguments against my position better than the other side. That’s a good way to help remove ignorance. When we shout our knowledge out, we’re really pounding it in, we’re not enlarging it.”

“Warren and I are better at buying mature industries than we are at investing in startups. I would hate to compete with Sequoia in their field, they would run rings around me.”

“I got close to Sequoia when, with Li Lu, we bought into BYD. We were buying into a venture-capital-type investment on the public market. With that one exception, I’ve stayed out of Sequoia’s business because they’re so much better at it than I would be.”

The Queen’s Gambit and investing

“I have seen an episode or two. To some extent, you can’t be good at chess unless you have a natural gift, and even if you have a natural gift, you can’t become great at it unless you start playing at a very young age. Any intelligent person can get to be pretty good as an investor and avoid obvious traps, but I don’t think everybody can be a great investor or a great chess player.”

“If you do that I’m a moral leper,” Munger said about the idea that managers have a moral responsibility to own their stock at as close to its fair value as possible.

“The Daily Journal stock sells way above the price I would pay if I was buying a new stock. The management should tell it like it is as all times and not be a big promoter of its own stock.”

“I don’t know how permanent it will be but it’s certainly caused a change,” Munger said about the idea that technology has permanently altered how companies should be valued.

Wealth managers being too active

“The wealth-management industry has a crisis on its hands. They really need the world to stay the way it is. That isn’t necessarily right for its customers.”

“The oil-and-gas industry will be here for a long, long time even if we stop using many hydrocarbons in transportation. The hydrocarbons are also needed as chemical feedstocks. I’m not saying that oil and gas is going to be a wonderful business, but I don’t think it’s going away.”

“I kind of admire the way Bill takes on these very hard problems,” Munger said, adding that he avoids challenges he won’t be good at addressing.

“Most people are born with a happy stat, and their happy stat has more to do with their hap pines than their outcomes in life,” Munger said, arguing that most people wouldn’t be significantly happier if they were richer or much more miserable if they were poorer.

“I don’t use much physics in investing. Occasionally some damn fool will suggest something that violates the rules of physics, and I will always turn off my mind when I realize the poor bastard doesn’t know any physics.”

“I’ve pretty well run the course. I don’t think I’m likely to have any new thoughts that are likely to work miracles. I’ve found that the old thoughts work well still. I’m kind of pleased that I’m still functioning at all. I’m not trying to move mountains.”

The secret to a long and happy and healthy life

“I don’t have any secrets. I’m alive because of a lucky genetic accident. I think I would have lived a long time if I’d lived a different life.”

“A happy life is very simple. The first rule of a happy life is low expectations. That’s one you can easily arrange. If you have unrealistic expectations, you’re going to be miserable all your life. When you get reverses, if you just suck it up and cope, that helps more than if you just fretfully stew yourself into a misery.”

“Rose Blumkin [of Nebraska Furniture Mart] had quite an effect on the Berkshire culture. Her mottos were, ‘Always tell the truth’ and ‘Never lie to anyone about anything.'”

Lessons from the pandemic

“We can do with a lot less travel and a lot more Zooming,” Munger said. “A lot of things are going to change,” he continued, predicting a lot of people will work from home a couple days each week once the pandemic ends.