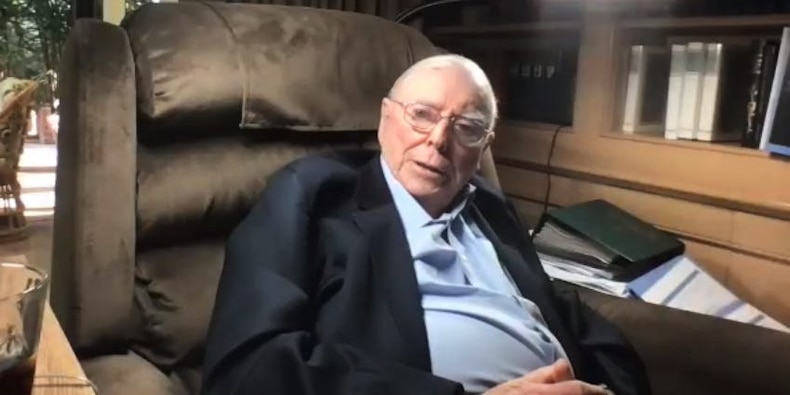 Charlie Munger discussed the current “frenzy” in the stock market, the potential risks of unprecedented monetary and fiscal expansion, and the key skills needed to excel at investing during a virtual interview hosted by the California Institute of Technology on Monday.

The 96-year-old alumnus, who serves as Warren Buffett’s right-hand man and Berkshire Hathaway’s vice-chairman, also spoke about how to navigate technological change, praised Costco and Sequoia Capital, and downplayed his philanthropy.

Here are his 22 best quotes from the interview, lightly edited and condensed for clarity:

1. “It is remarkable how much long-term advantage people like us have gotten by trying to be consistently not stupid instead of trying to be very intelligent.”

2. “It’s been a frenzy of activity in the investment field. Almost everybody smart is sucked into finance by the money. I don’t welcome it at all. I don’t think we want the whole world trying to get rich outsmarting the rest of the world in marketable securities.”

3. “Technology is a killer as well as an opportunity.”

Read More:JPMorgan unveils its 50 ‘most compelling’ stock picks to buy for 2021 – and details why each one will be a top performer

4. “Over the long term, the companies of America behave more like biology than they do anything else. In biology, all of the individuals die, so do all of the species. It’s just a question of time” – on businesses inevitably getting “clobbered.”

5. “Berkshire owns the Burlington Northern railroad. You can hardly think of a more old-fashioned business than a railroad business. Who in the hell’s gonna create another trunk railroad. We made that a success, not by conquering change but by avoiding it.”

6. “The most remarkable investment firm in America is probably Sequoia. That venture-capital firm absolutely fanatically stays right on the cutting edge of modern technology. They have made more money than anybody and they have the best investment record of anybody. It’s perfectly amazing what they have done” – praising Sequoia Capital, an early investor in Apple, Google, and most recently Airbnb.

7. “I rub my nose in my own mistakes. I try and keep things as simple and fundamental as I can. And I like the engineering concept of a margin of a safety. I’m a very blocking-and-tackling kind of a thinker. I just try and avoid being stupid” – describing his approach to investing.

8. “The single most important thing that you want to do is avoid stupid errors. Know the edge of your own competency. That’s very hard to do because the human mind naturally tries to make you think you’re way smarter than you are.”

9. “The last thing I would want to do in retail is compete with Costco.”

10. “What Buffett and I did is we bought things that were promising. Sometimes we had a tailwind from the economy and sometimes we had a headwind and either way we just kept swimming. That’s our system.”

11. “You can’t live a successful life without doing some difficult things that go wrong. That’s just the nature of the game, and you wouldn’t be sufficiently courageous if you tried to avoid every single reverse.”

12. “So many people are in it and the frenzy is so great and the reward systems are so foolish. I think the returns will go down” – replying to a question about whether he expects stock-market returns to be lower over the next 10 years than the last 10.

13. “We’re in very uncharted waters. Nobody has gotten by with the kind of money printing now for a very extended period without some kind of trouble. We’re very near the edge of playing with fire” – highlighting the dangers of unprecedented monetary easing and aggressive fiscal spending in recent months.

14. “I can remember having a five-course filet mignon dinner in Omaha for 60 cents when I was a little boy. The world has really changed.”

15. “Nobody knows when bubbles are gonna blow up. But just because it’s Nasdaq doesn’t mean it’ll have another run like this one very quickly again. This has been unbelievable. There’s never been anything quite like it.”

16. “Think about what Apple is worth compared to John D Rockefeller’s empire. It’s been the most dramatic thing that’s almost ever happened in the entire world history of finance” – commenting on the surge in technology companies’ valuations in recent years.

17. “Who would have guessed that a bunch of communist Chinese run by one party would have the best economic record the world has ever seen.”

Read More: A fixed-income chief whose firm oversees $3 billion lays out his plausible scenario for a global markets crash that originates in US Treasuries – and warns China continues to pose a threat

19. “You have to know a lot, but partly it’s temperament, partly it’s deferred gratification, you gotta be willing to wait. Good investing requires a weird combination of patience and aggression and not many people have it. It also requires a big amount of self-awareness about how much you know and what you don’t know. You have to know the edge of your own competency, and a lot of brilliant people think they’re way smarter than they are. And of course that’s dangerous and causes trouble” – describing what makes a good investor.

20. “What helps everyone is getting in somewhere that’s going up, and it just carries you along without much talent or work” – outlining the easiest route to success.

21. “If you pursue any career with enough fanaticism, that’s very likely to work better than not having the fanaticism. Look at Warren Buffett, he had this fanatic interest in making investments from an early age, and he kept making small investments, and he finally learned how to be very good at it.”

22. “I’m not that proud of my philanthropy. I regard it as an absolute minimum duty for somebody who’s reasonably successful to be reasonably generous. I don’t think you get big merit points for philanthropy you do.”