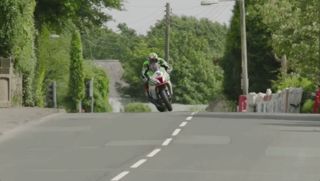 James Hillier looked like he was headed for an fifth-gear wipeout at the deadly dangerous Isle of Man TT when his bike got sideways on a jump early in the race. Incredibly, Hillier was able to hold on and steady the wildly bucking motorcycle (extra points for the leg wave) and continue on its way.

The section of the course is called Ballagarey Corner, which for good reason is known by the nickname Balla-scary. Hillier ended up coming un sixth in the race won by Michael Dunlop on the Bennetts Suzuki.

The race was red-flagged on the second lap when Ian Hutchinson, one of the favorites, wrecked on his Tyco BMW on the mountain section of the course. He ended up with a broken femur.

Watch Hillier’s save in realtime:

In Loving Memory, The Movie You Need To Watch About The World’s Most Dangerous Race, Is On Amazon Prime