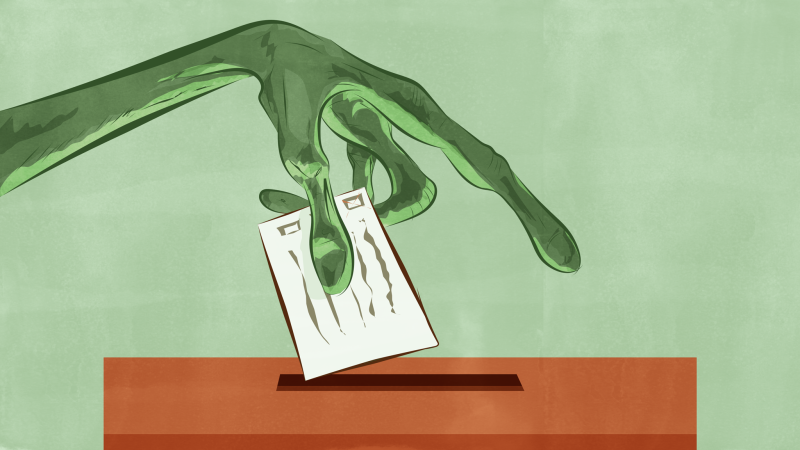 Today while the political world is fixated on a salacious tabloid story about Ted Cruz, eccentric news site operator Matt Drudge is concerned about aliens. He’s not the only one.

“They can bullshit me all they want but I’m not going to play the government’s game,” Stephen Bassett, Capitol Hill’s only registered extraterrestrial lobbyist, tells me. “This isn’t about ‘UFOs.’ The government uses that acronym in order to prevent disclosure,” he says. “‘Extraterrestrial craft’ is the proper term.”

Bassett is, as you might imagine, passionate on the subject—perhaps too much so. He told me that the acronym “UFO” itself is a slur used to “ghettoize” those who seek the truth, and compared it to racial slurs—specific ones, in fact, which he was not shy about using. Considering how many of his fellow truth-seekers use the term, it’s hard to avoid entirely.

“Since November, more political coverage has taken place on this subject than it has in 60 something years,” Bassett says. Since 1996, he has been waging war for the public’s right to know what information the government has about aliens and he thinks the time is nigh. “There is a very good chance that the truth embargo will collapse later this year, Hillary Clinton will be the one to push it and President Obama will have to address the issue!”

In case it doesn’t happen until the next president takes office, who among our top presidential candidates is the most UFO-friendly? Are there any extraterrestrial experts willing to rank them on a scale of 1-10?

“This will be easy,” writes certified UFO investigator—and 2014 TripAdvisor Certificate of Excellence winner for his Roswell UFO Tours—Dennis Balthaser, in an email to Gawker. “Every President since Truman, when the Roswell Incident happened in 1947, has tried to open the UFO Files and none have been able to. Don’t expect any of the current candidates to do it either. The President is a temporary employee (8 years max), they don’t have the security clearance or need to know. To answer your question on a scale of 1-10, I’d say 1.”

What the candidate said: Trump has remained (suspiciously) silent about aliens from outer space, but he’s the only candidate that was reportedly followed by an unidentified flying object in his own private jet. Sharp-eyed truth seekers have claimed to have seen his effigy in photos taken by the Mars rover. How do you explain THIS?! There is something going on with him that we don’t know about. We don’t know. We’re just saying.

Record on government transparency: Trump has never held office and has generally talked more about his dong than policy specifics. As a figurehead of the “birther” movement, he demanded the public be given President Obama’s birth certificate. The birth certificate was provided; Trump wasn’t satisfied; he doesn’t talk about it anymore.

Extraterrestrial disclosure friendliness: Based on his silence on the issue and his record of ‘seeking the truth’ then subsequently abandoning it, the Donald gets the lowest score.

What the candidate said: “I am not aware of Sanders or any of the Republican candidates even mentioning UFOs, much less having any serious intention of getting to the bottom of the mystery,” says UFOlogist Dr. Thomas E. Bullard says via email. There is one mention of Bernie Sanders commenting on the aliens, via Conway Daily Sun’s Daymond Steer. Steer is quoted by Grant Cameron (full-time researcher of “the UFO mystery”) on his blog:

“After admitting that he is in fact, the same person as ‘Seinfeld” creator Larry David (who played him on ‘Saturday Night Live’) Democratic candidate Bernie Sanders was asked if he believed that extraterrestrials may have visited the Earth, Sanders said, ‘I have met many. I see them in Washington all the time.’”

Steer broke Hillary Clinton’s position on aliens last year, but, suspiciously, this account of talking to Bernie Sanders doesn’t appear anywhere outside of Cameron’s blog. We asked him. In an email, Steer confirmed that this actually happened. He also says he didn’t realize he was on record when he was relating the Bernie encounter to Cameron over Facebook.

Record on government transparency:GovTrack.us ranks Sanders among the top 50% of Senate Committee Chairs for sponsoring or co-sponsoring 3 of the 19 bills relating to increased government transparency that came up in the senate during the latest session. In 2015, he re-introduced the Federal Reserve Transparency Act. He’s the only top candidate who opposed the Patriot Act in 2001 and believes that Edward Snowden “played a very important role in educating the American people to the degree in which our civil liberties and our constitutional rights are being undermined.”

Extraterrestrial disclosure friendliness: Bernie is sick and tired of hearing about your damn flying saucers. What do little green men have to do with the skyrocketing level of income and wealth inequality that’s not only grotesque and immoral, but economically unsustainable? Sanders will probably not be giving this issue any time unless aliens are funneling all corporate profits to the top 1%. He gets an extra point for his record on government transparency.

What the candidate said: According to Steer’s now verified account, Cruz “was surprised at Hillary’s involvement with the UFO story while First Lady” and “stated he might check into Area 51 if elected President.”

Extraterrestrial disclosure friendliness: Cruz is the kind of guy who could have first-hand experience with aliens and not give a shit unless there was some way to use it against one of his rivals. So if there’s an opportunity to drag Hillary into an investigation over it then yeah, he’ll move mountains to tell people what’s up at Area 51. We can’t say for sure that there are any liberals who would be harmed by those disclosures, we’ll split it at 5/10 and doc one point because Cruz hasn’t shown any interest in government transparency in the past. But he’s so unbelievably hated across all party lines that truth seekers should probably ask themselves whether they even want to hear the news if it’s coming from him.

What the candidate has said: According to Steer’s account, Kasich “does not believe.” But Kasich threw in a caveat, saying, “My brother-in-law says if I become president, his No. 1 thing is for me to open all books on Area 51.” On the phone, Kasich’s press secretary Joe Andrews could neither confirm or deny the existence of this brother-in-law and said he’d get back to us. We’ll update the post if he does.

Record on government transparency: As Governor of Ohio, Kasich has come under fire for his administration’s lack of transparency and weakening of transparency laws. He called Edward Snowden a “traitor” and he believes that programs instituted under the Patriot Act should continue. Minus 1 point.

Extraterrestrial disclosure friendliness: Like all things Kasich, his position is somewhere in the middle and is decidedly uninspiring.

What the candidate has said: “I’m going to get to the bottom of it,” Clinton told Steer in the now infamous comment to Conway Daily Sun at the end of 2015. “I think we may have been (visited already). We don’t know for sure.” Clinton says that her campaign chairman John Podesta has made her “personally pledge we are going to get the information out… One way or another. Maybe we could have, like, a task force to go to Area 51.”

CNN characterized her remarks as a joke, but extraterrestrial lobbyist Stephen Bassett tells me he’s certain she was sincere. He says that all politicians have to lie to get elected but in this case, “It’s an extremely risky statement and it could only cause her trouble.” Furthermore, Podesta is a known disclosure enthusiast. And X-Files fan.

And then, on Jimmy Kimmel last night, to Drudge’s delight, Clinton said: “I would like us to go into those files and hopefully make as much of that public as possible. If there’s nothing there, let’s tell people there’s nothing there.” And if there is something there? “Well, if there is something there, unless it’s a threat to national security, I think we ought to share it with the public.” She even specified that. “It’s ‘unexplained aerial phenomenon.’ U.A.P. that’s the latest nomenclature.”

Record on government transparency: Hahahaha. In addition to using a private server for her government emails, Clinton also voted to authorize the Patriot Act in 2001 and re-authorize it in 2006 and she has condemned Edward Snowden as a criminal who should be prosecuted. The list goes on.

Extraterrestrial disclosure friendliness: “Of all the candidates I would consider Clinton the most ‘UFO friendly,’” confirms UFOlogist Dr. Thomas E. Bullard says via email. “The others seem pretty much blanks… She has shown some interest in the subject and has discussed it with Rockefeller” (Clinton met with Laurance S. Rockefeller about the Rockefeller UFO Initiative in 1995) “and Podesta. So, at least, it is not nonsense or—dare I say—‘alien’ to her.” But he’s not too excited about it: “Air Force, CIA, and NSA files have been released in considerable numbers over the past several decades, but the answers are never the ones UFOlogists want. Of course, [the UFOlogists] would not be satisfied until the government coughed up the Roswell wreckage and alien bodies.” That might be difficult. UFO researcher/Roswell tour guide Dennis Balthaser says, “Hillary will not get into Area 51 either. I’ve been there and the security is like none other on the planet.”

Clinton is the clear frontrunner here. Even extraterrestrial lobbyist Stephen Bassett says tells us every other candidate is “irrelevant, won’t touch it or is ignorant” on the issue. But her record on government transparency raises some questions. We’re going to knock off two points, one for each of her email accounts. And despite her recent “unless it’s a threat to national security” caveat, she’s still on top.

If you want someone who considers extraterrestrial disclosure to be a top priority, meet independent candidates Andrew D. Basiago and Ed Baker.

What the candidates have said: Basiago wants to see government transparency on “UFOs,” atomic weapons, the Moon landing and protection of the Sasquatch as an endangered species. Among the 100 proposals that Basiago lists on his website, he also wants all living presidents to admit that they were told about their impending presidencies beforehand. He believes that the government has had time travel capabilities for years and future presidents are always informed that they will be elected, a belief that does not bode well for Basiago’s prospects in November.

Baker may appeal to a more conservative voter. Along with “full disclosure of UFOs,” his platform/goals include “support of the Confederate Flag,” “deport illegal aliens,” “punish the bad guys.” Although he does list one of his goals as just “taxes,” without any further explanation, so that one could go either way.

Record on government transparency: While neither candidate has held elected office, Baker does have a record of sorts. His official site features a breakdown of his criminal history and how he has overcome it.

Rhett Jones is a journalist based in New York.