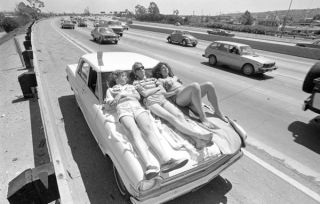 I tend to get pretty curmudgeonly about Model Bloat, excessive standard features, and other ills of the current generation of cars, but that sure as hell doesn’t mean I think Everything About The Old Days Was Better. Far from it!

Any vehicle model around for a while, no matter the form factor, has one thing in common with its… Read more Read more

I’ve almost always selected vehicles in the 10-to-15-year-old range, not because They Built ‘Em Better Back Then but because that’s the range you’re most likely to find in self-service junkyards. That means that my personal motor pool consisted of late-60s/early-70s cars when I started driving, and now I’m looking at mid-90s machinery. As far as I’m concerned, the Golden Age Of Cars was the early 1990s, when every vehicle came with electronic fuel injection, pretty good brakes, and— in many cases— interesting styling, but hadn’t yet been loaded down with 900 pounds of cup holders, power everything, and sound-deadening insulation. What a relief it was, a decade or so ago, when I could say goodbye to carburetors on my daily driver… forever! So, in case some of you young punks start getting all misty-eyed about the so-called glory days of great cars, here’s a little cold water thrown in your face, courtesy of the Voice Of The Ole Curmudgeon. Let’s go down the list of some of the reasons old cars actually sucked, shall we?

If you’re older than, say, 30 years old, you probably remember a time when you’d see broken-down cars at the side of the highway all the damn time, like every couple hundred yards or so. The hood’s up, it’s 110 (or minus 25) degrees out, and the car’s former occupants stand staring, helpless, at the dead engine. Why? Most of the time, because the ignition points (or the primitive Fritz-O-Matic electronic ignition) has crapped out.

You carburetor zealots can just go back to fishing your dropped jets out of the weeds in your back yard, because modern electronic fuel injection systems work perfectly 99.999999 and a bunch more nines percent of the time, and when you’re done doing that… well, don’t you have a sunk float or something to deal with? It’s a miracle that the voodoo-ass “technology” behind the carburetor worked as well as it did— remember how godawful those horrible electric chokes were, fellow old dudes?— and mechanical fuel-injection systems managed to be even less reliable. If I could have all the wasted hours I’ve spent futzing with carburetors back, I’d be years younger, I tell you what! In the modern, post-carburetor era, you stick the key in the ignition, you turn it, and the car fires right up. In the old days, you turned the key and prayed!

While we’re on the subject of head-clutchingly agonizing fuel-delivery systems, take a look at this vacuum-hose routing diagram for a mid-80s Honda CVCC carburetor. No, you’re not hallucinating— that’s more than 140 hoses you’re looking at! We all like breathing clean air, particularly those of us in smogged-out California, but the first 20 or so years— we’ll call it 1968 through 1988— of the Ball-Bustingly Strict Smog Law Era produced some cars that made us plead for a painless death.

If you’re driving one of those classic 1950s or 1960s machines so beloved by the “Old Days Was Better” crowd on the highway, and you come up over a rise and the traffic has come to a stop about a quarter-mile up ahead, what do you do? If you answered “Shit my pants!” you’re being honest, because your typical pre-1970s Detroit car’s brakes will have faded into complete ineffectiveness by the time you get down to 40 or so miles per hour. Go ahead, push harder on the brake pedal! Nothing will happen! You had to try a bit harder to lose the brakes on a Beetle or Corona, but it wasn’t difficult.

With cars built in the last 20 or so years, you can jump into a 150,000-mile or 200,000-mile beater and generally keep it within the bounds of a single lane on the highway. In the old days, you were lucky to get 60,000 miles out of your idler/pitman arms, tie rod ends, and/or ball joints before the car started wandering all over hell at any speed over a brisk walk. And, hey, weren’t kingpin axles a great idea? Remember how you’d get a quarter- to a half-turn of slop in the steering wheel, and that was totally normal? If not, consider yourself fortunate. Do we even need to get started on worm-and-roller and recirculating-ball steering boxes? No, we don’t.

Defrosters that didn’t defrost. Heaters that took 20 minutes to produce warm air, with passengers huddling against the vents like Gulag inmates against a Siberian bark-burning stove. Air-conditioning systems that wheezed out all their Freon every 18 months or so. Cable-operated vents and valves that froze when the cables rusted and/or snapped clean off. The one good thing about climate-control devices in the old days was that you could usually get a good blast of straight, untreated outside air through the vents… whether you wanted it or not.

This subject is a tough one for me, because we’ve seen so many lame-o safety “features” installed in recent years— from stability control to glow-in-the-dark inside-the-trunk release handles— and a pretty strong case could be made for the view that much of the drop in the vehicle fatality rate in recent decades can be attributed more to improved trauma-care techniques than to any changes in vehicles themselves, but there’s no way around the fact that vehicles built in the pre-shoulder-belt era were eager to kill, or at least maim, their occupants. Bash into a retaining wall at 20 MPH in a Comet or MGB and you’d be prying your dental work (or worse) out of the dashboard. Total absence of crumple zones, a cornucopia of sharp objects in the passenger compartment, door latches that popped right open in low-speed impacts, carbon-monoxide-enhancing ventilation systems, face-eating windshields, and so much more… and all of those dangers enhanced by the rotten brakes, dim headlights, and primitive tires of the era.

OK, tirade over, and I didn’t even bring up corrosion, stinky horsehair seat stuffing, or cardboard gloveboxes. Now get off my lawn!