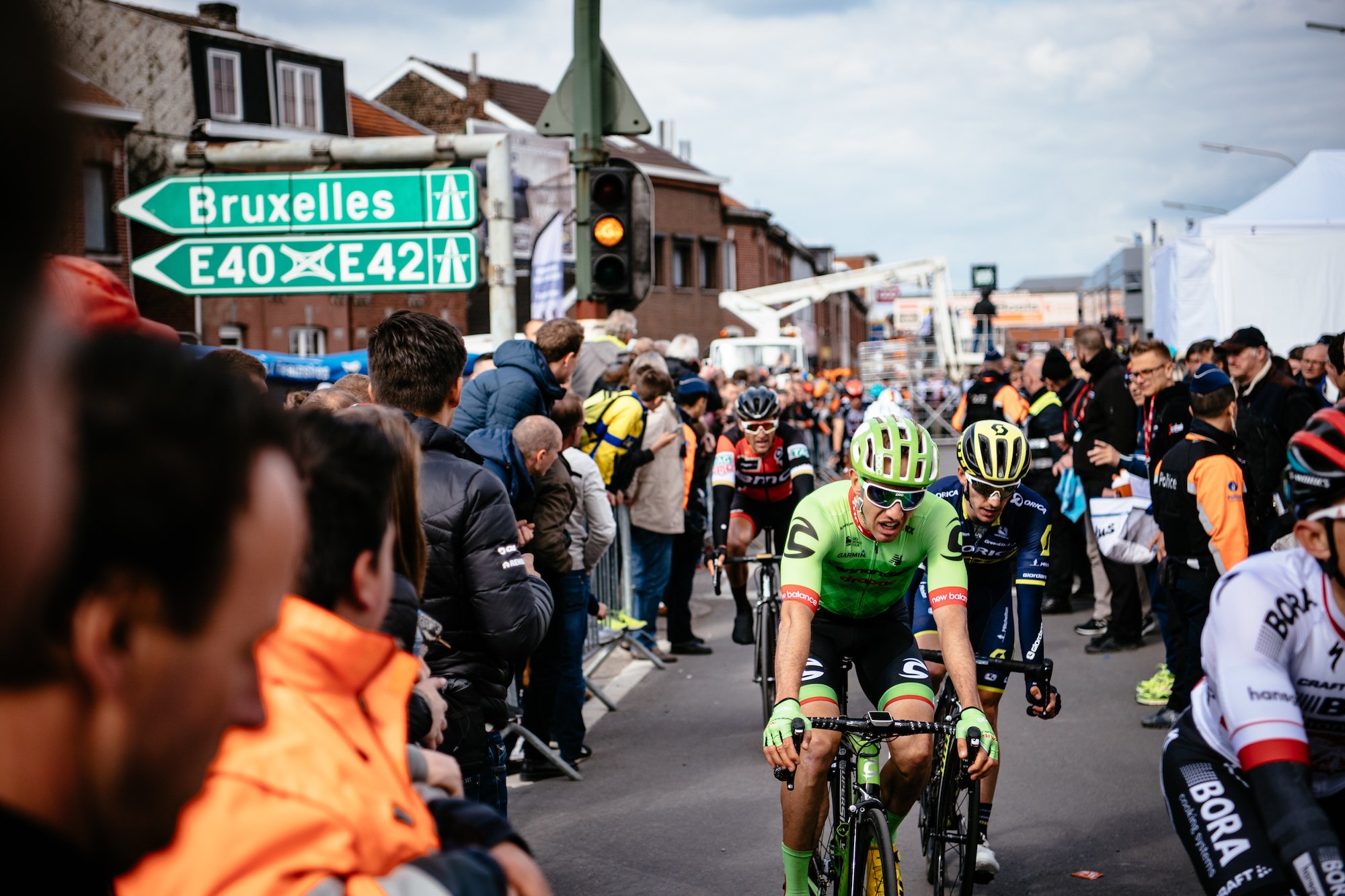 Our bus rumbled to a stop in the center of Liège, Belgium, and our pro cyclists lingered a while inside before stepping out onto a yellow carpet that would lead them through a throng of excited spectators crowded along the barriers.

Once off the bus, Toms Skujiņš, a Latvian on our Cannondale-Drapac team, stopped for photos with fans while his teammate Rigoberto Urán, a Colombian, signed autographs en route to a tent that would house the team presentation, all a day before the start of one of cycling’s most prestigious, and hardest, bicycle races — the one-day classic Liège-Bastogne-Liège.

As we’d soon learn, once our bus had come to a stop, its transmission promptly failed. Our driver, Borja, could only drive the bus in reverse.

That presented a special challenge.

I mean, imagine driving a hulking land yacht in reverse through a dense European city center.

So the bus was left there, right in the city center. Now what?

The team bus is a rolling safe space for athletes who otherwise compete in a natural arena, where fans get close enough to push riders up climbs, and sometimes snap selfies with them.

Our riders and staff went to the team presentation, and the event organizers paid for security to guard the bus. And it was at that point that our team director Juan Manuel Gárate, a Spaniard, set to work.

He would plan the next 48 hours down to who traveled in which cars, and what they carried with them — no easy task when you consider that teams are effectively traveling circuses of 20 people and 60 bags, some of which happen to be bicycles. Alex Howes of the US making due without a bus.Gruber Images

Gárate worked without pause from 6 p.m. to midnight, charting an intricate web of logistics without the bus, aka the command center, whose coffee makers, Crockpot, refrigerators, showers, chargers, and TVs would be missed.

At 8:30 that night the team held a meeting. Via a projector, Gárate pointed out the movements of riders and staff, how people would get from the hotel to the bus, from the bus to the finish (for anyone not racing), and from the finish to the airport, train station, or wherever they needed to go. On race day we’d borrow the car of a journalist to help move people around.

The bus would stay where it was parked overnight, as if we had a choice. It was close enough to the start so that riders and staff could still use it as they normally would in the morning — for meetings, treatment, respite. It’s not uncommon for a team to send riders home by car, plane, or train right after a race.Gruber Images

But then there was this other challenge.

Team buses serve as gear haulers from one race to the next, transporting bikes, trainers, helmets, and extra clothing for bad weather. There was also a matter of guys needing to shower after the six-hour race before heading to the airport.

“After the race we had to transfer a lot of stuff from Belgium to Switzerland — rollers, time-trial bikes, rain bags, helmets, coolers,” Gárate explained. “Everything was in the bus, so we had to make a plan.”

And in the end we got by with a little help from our friends.

Movistar, a Spanish team, agreed to take some of our gear to the next race, in its already heavy vehicles set to leave Belgium right after Liège finished.

Showers? Two neighboring teams at the finish-area parking, LottoNL-Jumbo, a Dutch outfit, and Orica-Scott, an Aussie team, agreed to let our riders climb aboard their buses and shower after the race. That was not a small thing. The water tanks are only so big, and cramming extra bodies into a bus — with guys they had just been competing against no less — made for a very tight squeeze.

This is the community of professional racing, of cycling in general. The sport is so hard physically, mentally, and logistically that we all have to watch out for one another. You never know when it’s your bus that’s going to get stuck, when it’s your rider who’s crashed far from a team car, or if it’s even you who needs a lift home on a rainy Sunday ride after three flats and no spare inner tube left. We need one another.

Instead of the usual postrace meal of rice, our guys sat on the bumpers of team cars eating pizza. The scene had an old-school element to it, of club riders racing, piling into a van, and heading to the next race. It may have been a pain for the riders, but they never let on. It was something to behold in an era of Death Star buses and the lockdown of pro sports generally.

“This only happens in cycling. We are lucky to be in this sport. This is the stuff people don’t see,” Gárate said. “Even when a rider on another team doesn’t have a bottle and he’s thirsty, you give him one — 100% of the time.”

“In this case they shared their buses. Everybody who knew about it tried to help us.”

American Matthew Beaudin is the communications director for the US-based Cannondale-Drapac Pro Cycling Team, which competes in the Tour de France.