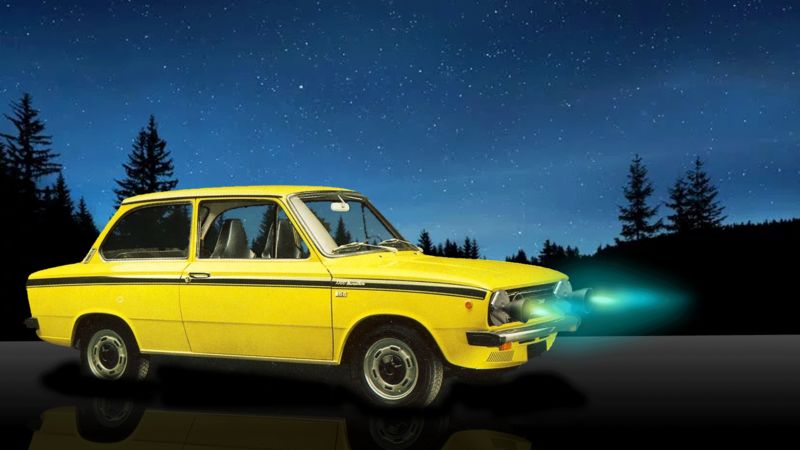 On a long, tedious night drive, the mind sometimes wanders. As you watch the twin beams of your headlights reaching across the black, featureless landscape, your mind may wander to this thought: if those headlights are sending out billions and billions of photons at the speed of light out from the front of my car, aren’t those headlights sort of like rocket motors, pushing against the car? Are they slowing the car down? Let’s get to the bottom of this.

Here’s the strange thing about light: it doesn’t have mass, but it does have momentum. Normally, momentum is the product of mass and velocity, and is something like a pushing force: think about a bowling ball hurled at you. It has weight (close enough to mass for this example) and it has speed.

Those things together make momentum, and you can see how more mass means more momentum: a bunch of bubble bath foam shot at you at 5 mph sure hurts less than that bowling ball flung at you at the same speed.

So, for complicated reasons, light has momentum. Not a lot, of course, but there is a bit there: that’s why things like solar sails can actually work: the “pressure” of light from the sun can push a solar sail on a spaceship to make it move, much like how the wind pushes on a sail of a sailboat.

So, with this in mind, let’s dig deeper into the question of just how much those headlights are pushing against the car when you turn them on. To make sure I actually did this correctly, I reached out to our captive physicist, Dr. Stephen Granade, to get a much fuller explanation. Here you go:

When you turn on your headlights, the light beams push back on your car because light has momentum. Even though photons, the particles that make up light, don’t have mass, they do carry momentum like they were ping pong balls. As Newton’s Third Law tells us, for every action, there’s an equal and opposite reaction. By shooting photons out in front of the car, the car is pushed back just a bit. Chemical rockets actually work the same way! They throw particles of hot gas out the back of the rocket, and that pushes the rocket forward.

Here’s what it has to do with space travel, kinda:

Of course, rocket motors are really powerful, while light doesn’t have a lot of momentum. And it’s a good thing, or else we’d feel like we’re getting hit on the head with tiny hammers every time we went outside. But the pressure of light can have a big effect, especially in space. Any time we send spacecraft to another planet, we have to take into account that the Sun’s light will push on the spacecraft, or else we’d miss the planet. You can even use light pressure from the Sun to push a spacecraft around by reflecting the light with a solar sail.

When you buy a light bulb, you don’t actually care about how many watts of light that that bulb puts out, because not all light is created equal when it comes to our eyes. Our eyes are most sensitive to green light. The further a color is from green in the rainbow, the less sensitive our eyes are to it. It’s why a green laser pointer looks dazzlingly brighter than a red one, even if they put out the same amount of light.

Because of that, lightbulbs don’t give their output in watts. They given them in lumens. The conversion between watts and lumens depends on what color light you’re talking about. And because we want white light instead of, say, green, our headlights have a mix of colors in them.

I can’t make an exact conversion without finding out what colors make up a headlight’s “white” light, and a lightbulb’s spectrum depends on the manufacturer, the type of lamp, and more.

Of course, I haven’t let this kind of thing stop me in the past from making estimates, and I’m not going to let it stop me now.

The Phillips Xenon headlight puts out around 3400 lumens each, for 6800 lumens overall. Let’s assume we’re using our high beams, because those put out the most light and point that light mostly straight ahead, giving us the biggest effect.

If the headlights put out green light only, then I could divide those 6800 lumens by 683 lumens/watt to convert from luminance units — the ones that include our eye’s response to colors — to radiance units. Since I don’t know the exact color makeup of that lamp, I’ll wave my hands a bit. Over the likely range of colors, and knowing that HID lamps put out more yellow, green, and light blue light than violet or red light, I’ll divide those 6800 lumens by 450 lumens/watt. That gives me 15 watts of radiant light. If I divide that by the speed of light, then I get a force of 50 nanoNewtons.

Okay, so how much does it really push against your car?

That’s not a lot of force. Take an inch-long strand of hair. Hold it in your hand. It’s pushing down on your hand with twenty times the force as those headlights are putting out on high.

To put it another way, let’s take my Honda Fit way out into space, in the inky void between solar systems, and turn my headlights on bright. My car will start to move, pushed by the headlights. I’ll reach 60 MPH in a blazingly-fast 20,000 years or so.

So go ahead and use your brights all you want! The only way it’ll slow you down noticeably is if your headlights blind an oncoming car and cause a wreck.

So go ahead and use your brights all you want! The only way it’ll slow you down noticeably is if your headlights blind an oncoming car and cause a wreck.

There you go! If you’re in an emergency braking situation, you may as well turn those high beams on and get the extra benefit of those 50 nanoNewtons of force slowing you down—every little bit helps, right?

Probably not here. Also, I think a 0-60 time of 20,000 years from a car running on headlight propulsive power in a vacuum has to be the slowest 0-60 time possible. Well, I guess you could go slower with just the parking lights on. Either way, that’s not quick.

If it’s dark, keep the lights on and just hit the gas 50 nanoNetwons harder

A Physicist Explains The Three Biggest Challenges For The Hyperloop

How Much Can CNN Get Wrong About F1 Engines, Physics In One Article?