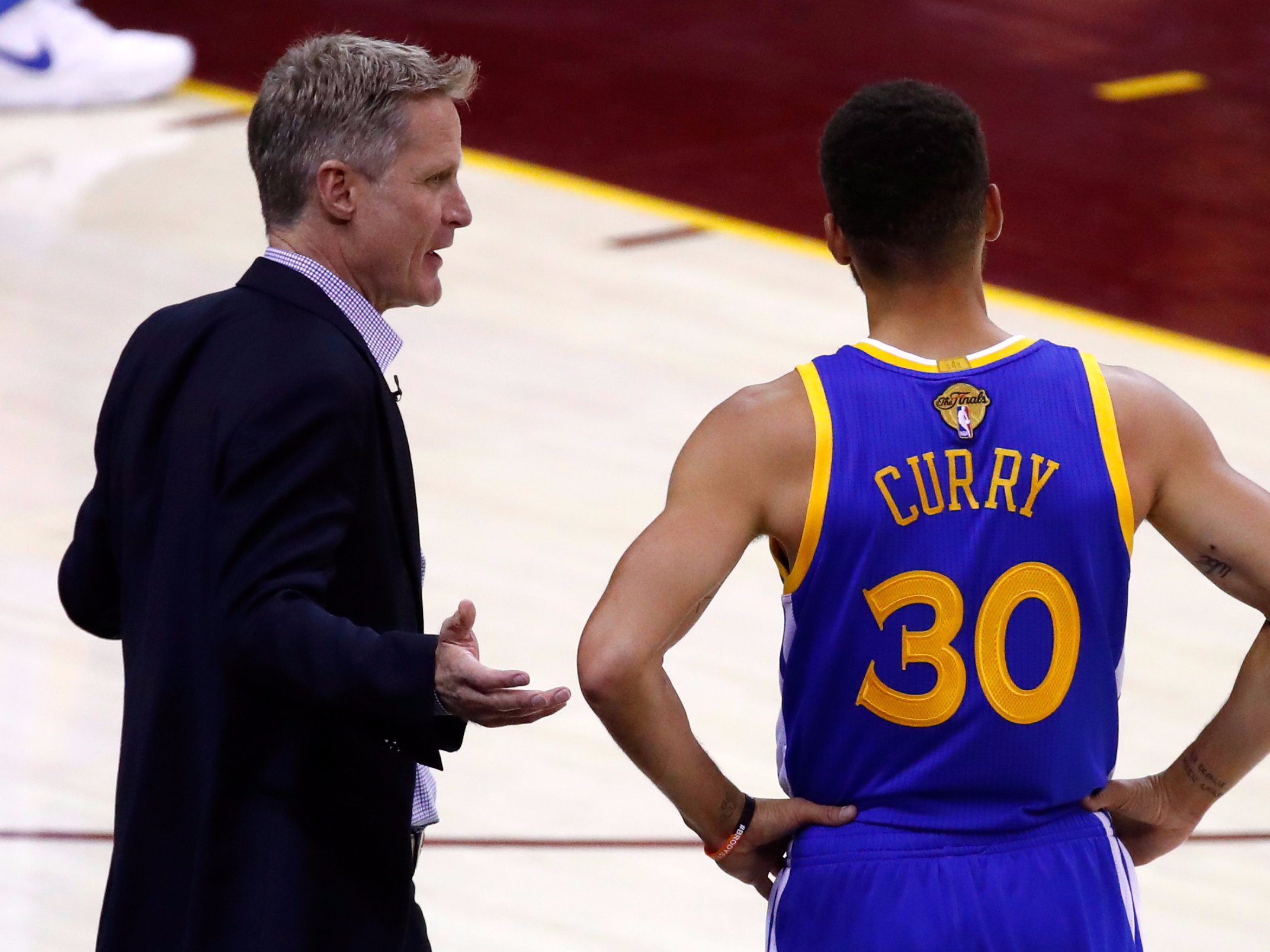 Steve Kerr and Stephen Curry of the Golden State Warriors discuss the play against the Cleveland Cavaliers during the first half in Game 4 of the 2017 NBA Finals.Gregory Shamus/Getty Images

With the Golden State Warriors up 3-1 against the Cleveland Cavaliers going into Game 5 of the NBA Finals at Oakland’s Oracle Arena — a situation eerily reminiscent of the 2016 Finals, when the Cavs came back from a 3-1 deficit to win it all — tensions are high.

Warriors coach Steve Kerr is especially likely to be feeling the pressure. Kerr sat out most of the playoffs due to health issues related to a two-year-old back surgery gone wrong, but returned to the court to coach the team in Game 2 after interim coach Mike Brown went 11-0.

But Kerr isn’t one to buckle under stress. In fact, the coach draws on one particular text as a guide to staying relaxed when the heat is on: the 1972 book “The Inner Game of Tennis: The Classic Guide to the Mental Side of Peak Performance,” by Timothy Gallwey.

Kerr is a serious reader with some great book recommendations, but when he sat down with Sports Illustrated writer Chris Ballard last year, the discussion soon turned to the nonfiction book.

Gallwey’s classic text offers key lessons for instances in which the anxious brain might sabotage whatever you are trying to accomplish. The book examines the relationship between the body and mind, informed by Zen Buddhism, and seeks to help readers understand how to stop their mind from getting in the way of their bodies.

It’s essentially about the practice of mindfulness — quieting your thoughts and not judging every moment so that you can let your body do what it knows how to do.

As Gallwey writes in the introduction:

“It is the thesis of this book that neither mastery nor satisfaction can be found in the playing of any game without giving some attention to the relatively neglected skills of the inner game. This is the game that takes place in the mind of hte player, and it is played against such obstacles as lapses in concentration, nervousness, self-doubt and self-condemnation. In short, it is played to overcome all habits of mind which inhibit excellence in performance.”

The book has had such a huge impact on Kerr that he says he always keeps multiple copies of it since he gives them away so frequently. And he’s not the only devotee — Seattle Seahawks coach Pete Carroll is a huge fan and wrote the forward to a recent edition. New England Patriots quarterback Tom Brady has also posted quotes from the book on Instagram.

According to performance expert Brad Stulberg, author of the recent book “Peak Performance: Elevate Your Game, Avoid Burnout, and Thrive with the New Science of Success,” the 45-year-old lessons in the book are largely backed up by psychology research today.

“[N]ow-emerging science supports nearly all of its insights, many of which, like how to thrive in unsettling times, are as relevant as ever,” Stulberg wrote for New York Magazine. The chief lessons in the book — namely that you can’t force relaxation, should stop obsessing, and must choose action over thinking about action — are all relevant now, both for sports and life in general.

“The overarching lesson of ‘The Inner Game of Tennis’— that we need to get out of our own way — is simple yet profound,” Stulberg wrote. “There are immense benefits to muting the judging Self-1 so that we can get more in touch with the doing Self-2. If we tune into and lead with our bodies, they have lots to tell us. After all, ‘they’ are us.”

This applies to playing, coaching, and more.

As a team, the Warriors have a reputation for developing mastery by working on the mental side of the game. That makes sense — in any high-pressure competitive athletic situation, the difference between success and failure is frequently a question of mental readiness.

In the case of Kerr and the Warriors, we’ll see tonight whether that preparation and the lessons of “The Inner Game” are enough.