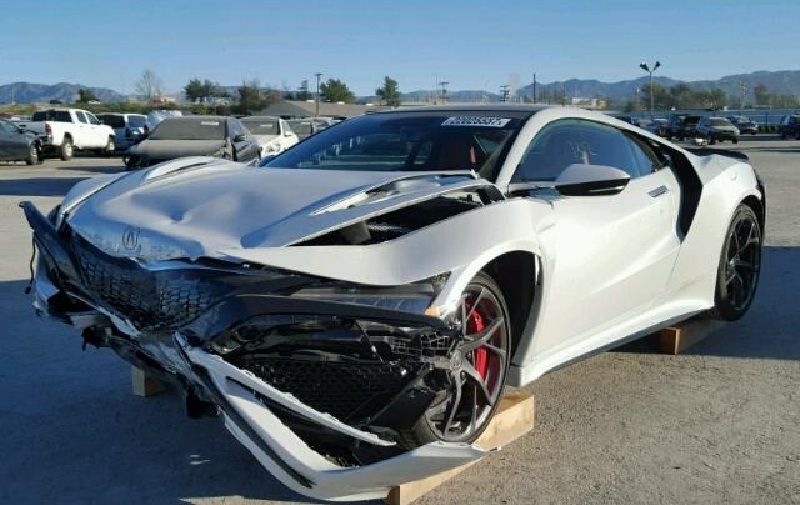 A 2017 Acura NSX is already up for auction, and it probably has something to do with it being completely mangled in a crash.

To Generation X, the letters “NSX” meant something. Maybe to the men and women of Minato, they…Read more Read more

The auction for this NSX is currently at just $72,500 over on Copart.com, with only 7,312 miles listed on the odometer. The auction price is far from the sticker value of around $250,000, but who knows how much cash you’d have to dump into this mess to get it roadworthy again.

The Copart listing does claim that the vehicle can still start and move under its own power, it’s just not clear in exactly what capacity. Images show heavy damage to the front of the car, and more damage around back. The driver’s airbag also deployed.

The NSX crashed in Los Angeles while the driver was involved in “spirited driving”, according to this NSXPrime forum thread. It also appears to have wrecked in the rain. There doesn’t appear to have been any injuries.

Many forum members assumed this car would be grabbed by Acura for testing and repair (like they did with a poor Ferrari 458 while developing the NSX), but this listing on Copart by Farmer’s Insurance suggests otherwise. The forum thread also claims that the owner already ordered a new one.

Must be nice to churn through the latest supercars like that! At least it was good enough after 7,000 miles to warrant a replacement. Let us know if you pick this up!

Is This The First Public Crash Of The 2017 Acura NSX?