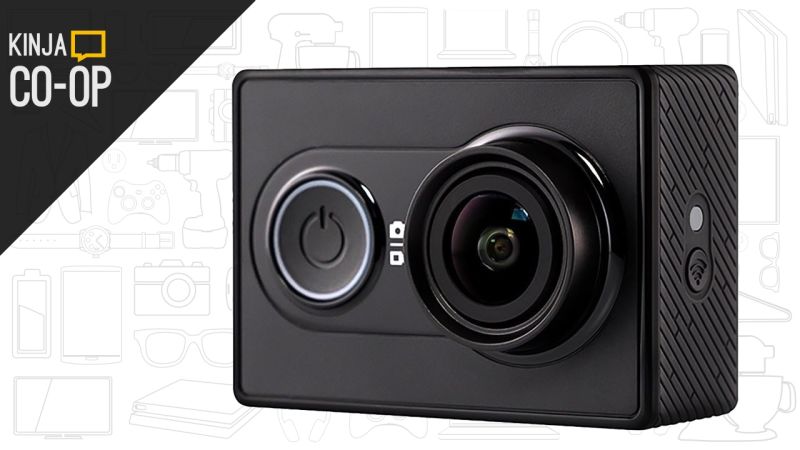 We didn’t expect a ton of nominations in our budget action cam Co-Op—GoPro still dominates the market, despite their financial troubles—but one particular model earned nearly three times as many recommendations as any other competitor: Xiaomi’s Yi action cam.

Gawker Media may get a commission
$80.95
Buy Now
Amazon

I poked around online when I saw how well this was performing, and I have to say, it seems to be an impressive little gadget for $80. Its video quality (assisted by a genuine Sony image sensor) stands up well next to the GoPro Hero4 Session, built-in Wi-Fi allows you to change recording options and view a live preview on your phone, and it can even shoot in 1080p at 60fps or 2304 × 1296 (which they confusingly refer to as 2K) at 30fps. If you need to shoot in 4K, you’re still going to have to shell out for a GoPro Hero4 Black, but otherwise, the Yi doesn’t seem to have any glaring weaknesses

It’s ridiculously cheap and still able to shoot decent footage while having a bunch of additional awesome functions like connected to a smartphone via wifi and also multiple recording modes.

Another massive bonus is the fact that once you get a waterproof case or an adapter, you can use it with any existing go pro accessories that you might have or want to get.

and finally, I believe it’s also got a decent amount of water resistance built in as well. – Mike_Vee

The camera itself will set you back about $80 at the time of this writing, but you’ll probably want to tack on a microSD card, some extra batteries and a waterproof case (which is compatible with all GoPro mounts, by the way) to get the most out of it.

Gawker Media may get a commission
$16.99
Buy Now
Amazon

Gawker Media may get a commission
$49.95
Buy Now
Amazon

7237 purchased by readers•Gawker Media may get a commission
$17.63
Buy Now
Amazon

Own one of these? Share your footage in the comments!

Commerce Content is independent of Editorial and Advertising, and if you buy something through our posts, we may get a small share of the sale. Click here to learn more, and don’t forget to sign up for our email newsletter. We want your feedback.