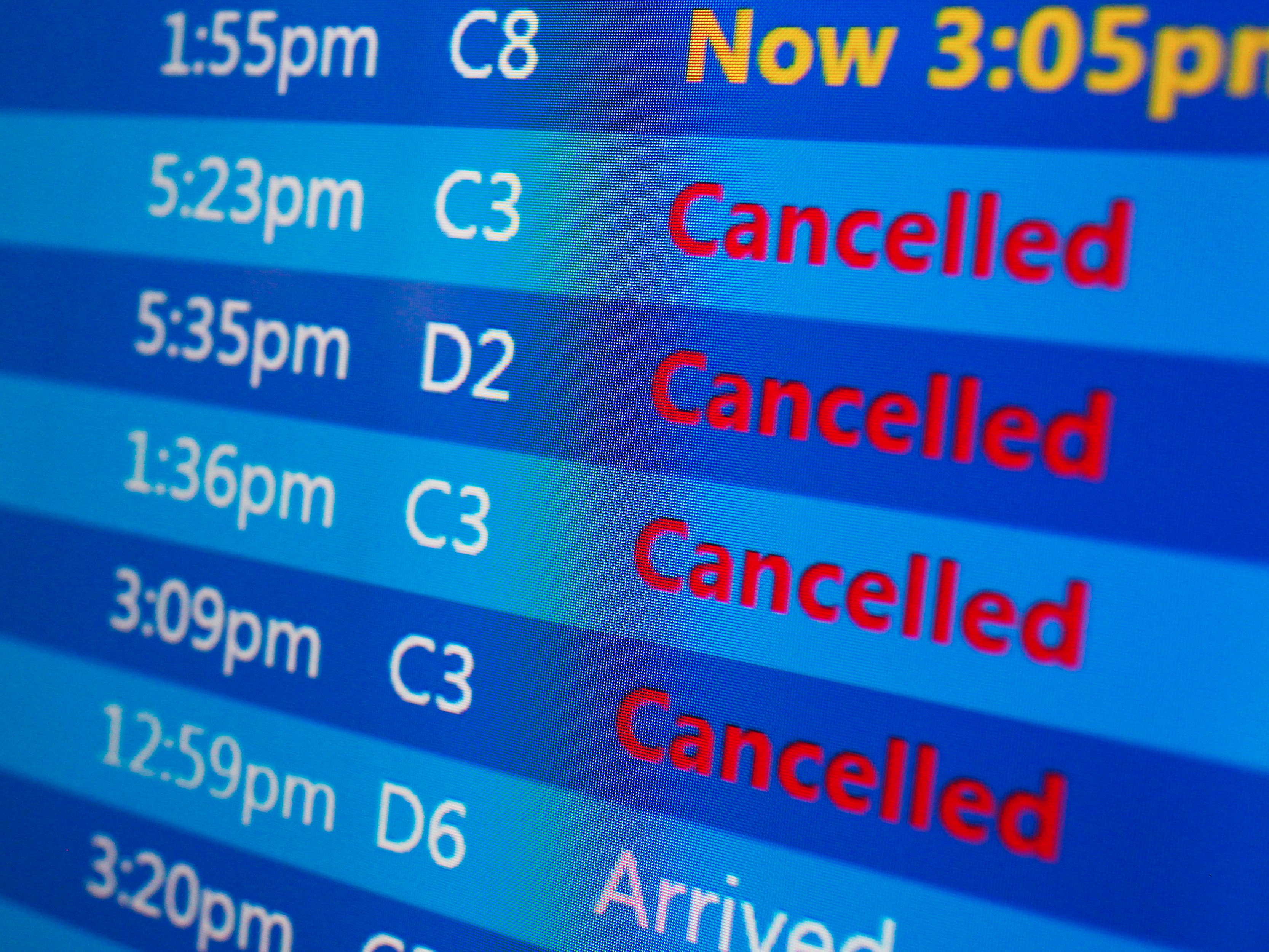 Winter Storm Jonas has had a devastating effect on air travel in the northeastern US.

More than 12,000 flights have been canceled since Friday.

According to FlightAware, cancellations included 3,000 flights on Friday, 4,500 on Saturday, and another 3,500 on Sunday.

And nearly 1,500 flight have already been canceled Monday.

Normally, the airspace between Washington, D.C., and New York City is some of the busiest in the world.

Over the weekend, the historic winter storm halted movement across the region.

Seven major airports serving D.C., Baltimore, Philadelphia, and New York were all but shut down.

In a screenshot from Flightradar24, the airspace above the region shows virtually no activity.

All major airlines operating in the US temporarily shuttered their operations between D.C. and New York during the storm.

The few aircraft seen in the area were inbound flights from other parts of the US and Canada.

By Monday morning, however, things were beginning to return to normal as air travel around the region resumed service.

Delta Air Lines told Business Insider this morning that its operations in the Northeast and Mid-Atlantic regions of the US are back at strength. The airline expects the majority of the backlog of passengers to clear out by the end of the day today with a few bleeding over to Tuesday. Here are your rebooking options if your airline is affected by the storm:

Delta has offered to refund tickets for passengers whose flights are significantly delayed or canceled as a result of the weather. Even if your flight isn’t canceled, passengers traveling into, out of, or through the affected cities listed here may make a one-time change to their ticket at no charge.

To qualify, passengers must be ticketed to travel between January 22 and 25 with tickets reissued for travel no later than January 29.

Click here for the latest information from Delta Air Lines and a list of cities included Delta’s waiver.

Passengers traveling on American Airlines or American Eagle who are scheduled to fly in cities affected by the storm may make a one-time change to their itinerary without having to pay a ticketing fee. To qualify, passengers must be ticketed to fly between January 25 and 26 with tickets originally purchased before January 24.

The passengers may switch to a new flight as long as they book in the same class and do not change the destination or origin from their original booking.

Passengers traveling with United Airlines who are affected by the winter storm can switch to a different flight without paying a change fee. Travelers who qualify need to hold tickets dated January 22-26 into, out of, or though the affected cities listed on United’s website.

For qualifying passengers, the airline will waive the change fee and difference in airfare for new flights departing before February 2 as long as the new flights are in the same cabin class and between the same cities as in the original ticket.

JetBlue will waive change fees and the difference in airfare for passengers traveling through cities affected by the blizzard. To qualify, customers must be scheduled to travel between January 22 and 25, with tickets purchased before January 20.

Affected passengers may rebook for travel before January 29. Customers who have had their flights canceled may alternatively opt for a refund.

Virgin America will waive the change fees and the difference in airfare for passengers scheduled to travel between January 22 and 24 within affected cities. Customers have until January 24 to change their travel plans for new flights scheduled for no later than March 10 that are in the same cabin class and between the same cities as those in the original ticket.

Alternatively, qualifying passengers may cancel their itineraries without incurring a cancellation fee.

Passengers flying on Southwest in cities affected the winter storm may also be eligible to rebook. The parameters for eligibility, however, vary from city to city.

SEE ALSO:United Airlines is the only airline in America that’s got a problem with cheap oil

NOW WATCH: Watch 13 hours of superstorm Jonas in one minute