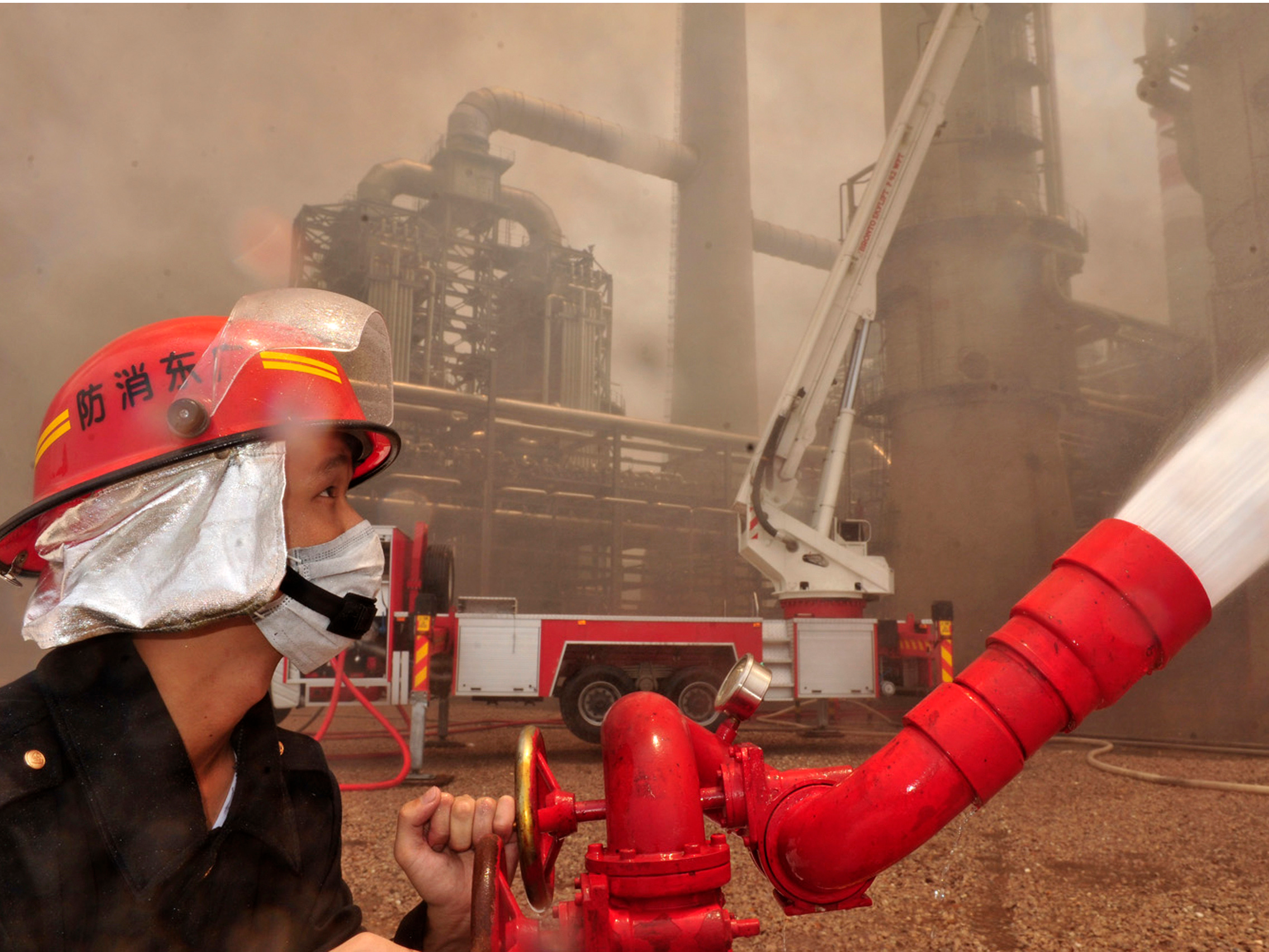 ReutersA firefighter at a refinery owned by China National Offshore Oil Corp. in the Dayawan Economic and Technical Development zone in Huizhou city, Guangdong province, in 2011.

If you are concerned about the declining price of oil, you should probably know what China — the world’s second-largest oil consumer — has been doing with its oil industry for the past year.

It has prepared its refiners to dump a massive load of supply onto an already oversupplied market.

All of this has to do with China’s attempt to invigorate its private markets — to liberalize its economy.

Last year, China allowed small, private oil refineries, called teapot refiners, to start buying up crude oil — a lot of it. That crude oil was never meant to just stay in China and supply the domestic market. China always intended to sell the refined oil products to the rest of the world.

“According to CEIC China’s total import volume of crude oil increased by 8.8% YoY in 2015, which is slightly lower than the growth rate of 9.3% in 2014,” Morgan Stanley wrote in a recent note. “However, the majority of crude oil is consumed by refineries, which are turning to export final products.”

Why export? Because of the most serious, immediate problems facing China’s slowing economy. More from Morgan Stanley [emphasis ours]:

Faced with weak domestic demand and overcapacity situation, Chinese refineries are expanding overseas markets. In recent months, the Chinese government began to allow teapot refineries to export product oil after granting them the import quota, as a result, the teapot refiners are likely to have higher run rate in 2016.

Teapot refiners are now expected to gobble up 20% of China’s oil imports in 2016, according to Bloomberg. Thanks in part to their output, which has increased 49% since this time last year, China is now a net fuel exporter.

Initially, Wall Street thought the teapots’ entrance onto the scene would be good for the falling price of oil. Analysts all over the industry thought the teapot refineries’ appetite for oil would drive up global demand.

Sanford C. Bernstein wrote back in May that the teapot buying spree would create a global crude oil shortfall of 1.5 million barrels a day in the fourth quarter of 2015. At that point, it wrote, the price of crude oil would increase to $80 a barrel.

But that’s not what’s happened at all.

The party’s just getting started

Teapots love the low price of crude oil because it means they can snap it up on the cheap, and ultimately what they care about is volume. They’ve just been sitting around capable of handling more product to refine. All they were waiting for was the Chinese government’s approval, so they hit the market ready for a $30-a-barrel oil world.

At the same time, China’s legacy refineries, the state-owned enterprises that are really suffering from overcapacity, are ramping up their output as well.

They’re competing with 13 operational teapots in mainland China, with more on the way and the Chinese government’s blessing in hand. They’re also ramping up production offshore.

For example, PetroChina’s oil and gas overseas production hit a record high in 2015 of 72 million tons, and the company’s overseas business hit 127.7% of its targets.

So the volatility that we’re seeing in the stock market that seems correlated to this continued supply glut, and the deflationary force that is lowering oil prices, isn’t going anywhere if China has any say in the matter.

The country’s oil industry is just getting started.