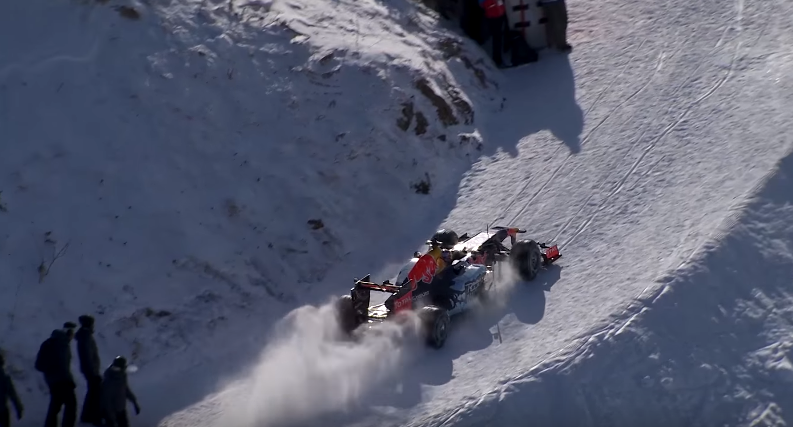 Max Verstappen is an 18-year-old Belgian and Dutch driver who finished 12th this past year in his first season in Formula 1.

Verstappen drives for Team Scuderia Toro Rosso, which is owned by Red Bull. It is through that relationship with Red Bull that set up one of the crazier stunts you will ever see performed with a car that costs about $3 million to build.

Red Bull had Verstappen drive his car on a ski slope.

To get the car to the top of the mountain, it was airlifted with helicopter. And chains on the tires. It’s not clear how steep this cliff is, but it looks like something you would not want to slip off of in a car. Fans lined the side of the course, which makes them arguably braver than Verstappen.

Verstappen did note after the run that performing the two “drifts” was one of his favorite parts of this stunt.

It is unclear how fast Verstappen was going, but it wasn’t slow.

“We can’t go much faster than this,” Verstappen said after the run. “Because it starts to be a bit too much bumpy.”

After going down the course, he turned around and went back up and that’s when he appeared to really let loose.

You can see the full run from Verstappen’s onboard camera here: And here is a longer version of the entire event.