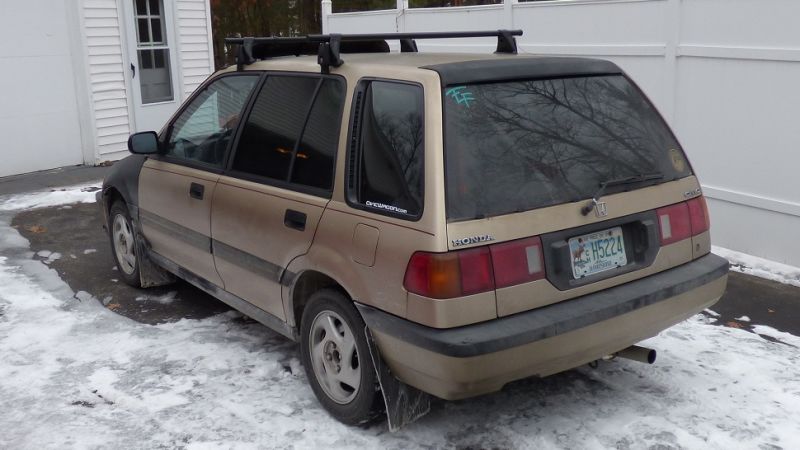 With the Snowpocalypse upon us I’m sure everyone’s out driving their lifted trucks and SUVs like we “recommended.” But before modern crossovers dominated our roads, and before Subaru enabled everyone to channel their inner Colin McRae, there were a few other cars with all wheel drive as I’ve touched on this before. One of them was the Honda Civic Wagon.

Read on Right Foot Down or continue below

I’m already quite familiar with these cars. Before Wagon Attack made the Civic wagon as cool as the Doctor’s bow tie, I owned two of them myself – a 1991 front wheel drive model with a 5-speed, and an automatic 1989 with Real Time 4 Wheel Drive. I was a regular on the Civic wagon forum. These cars are pretty rare now, but I just had a chance to take a trip down memory lane with Justin Abide’s 1988 RT4WD wagon. His is equipped with a 6-speed manual transmission. Yes, a 6-speed in a 1988 Civic! Like the Porsche 959, its lowest gear is below 1st, about 75% lower. I always thought SL gear (Super Low) was much lower than that, emulating low range in a true four wheel drive vehicle with a transfer case, but that’s not true in the Civic. For normal driving, the top five gears are fine.

Despite not wearing an Si badge, RT4WD models came with the same D16A6 motor as the contemporary Civic and CRX Si to offset their “hefty” 2,500lbs. That’s featherweight by today’s standards, but heavy compared to other Civics and CRXs that weighed less than a ton. Justin has replaced the Si motor with a D16Z6 from the next generation Si. The intake, header, and exhaust are all upgraded, and a Hondata S300 to run the engine and make it fully customizable. Justin plans to use a mish-mash of D-series motor parts, Suzuki Grand Vitara pistons, and some custom internal parts to build a turbo motor. At this point he’s laid the groundwork for that upgrade. The D16Z6 works best at the top of its RPM range after VTEC kicks in (yo) and has significantly more pep than stock when you wind it out. Justin also had to warn me that the Check Engine light doubles as a shift light so that I wouldn’t think I broke the car when it came on. You don’t really get the opportunity to use the extra power at high revs around town, but the turbo should fix that.

The winter wheels are from a CRX Si. He also has some Acura wheels for summer, and some strong E30 BMW bottlecaps (with Honda center caps) for rallycross. The rear brakes have been converted to discs. Ksport rally gravel shocks give the car far less body roll than stock, yet is still compliant enough to provide a ride only slightly stiffer from stock. He doesn’t run anti-sway bars. “I have a rear sway for tarmac,” says Justin, “but I don’t think it even needs it unless you just want to rotate every time you touch the brakes.” Where it excels is over bumps at speed. I barely felt a rather significant bump that we hit during a spirited back road romp. Justin assured me that if we’d hit it at 20mph, the car would have actually handled it far worse.

The interior is standard EF Civic, with lots of solid brown plastic everywhere. The seats have been reupholstered. I sat much higher than I did in my own Civic wagons, making me realize how worn out my seats were. The shifter has not so much a knob as a lever, by Fox Designs, etc., making throws quite long but with little effort. It also places the shifter much closer to the steering wheel, like the EP3 Civic Si. A gauge pod occupies the shelf in the center of the dash, which will help when the turbo goes on.

The stock headliner has been replaced with this pimpin’ plush houndstooth fabric, which also wraps the gauge pod and the rear speaker pods. “Look at this thing,” said Justin. “It’s an 80s couch on wheels!” It really is, but with the suspension of a rally car. Despite Hardrace spherical trailing arm bushings, Function 7 spherical rear lower control arms, and an Innovative crossmember replacement up front, the ride is still compliant enough to not beat you up on the street. Justin plans to upgrade the front to Kingpin Machine radius rod bearings.

That rally suspension isn’t just for bragging rights. Justin regularly rallycrosses with the New England Region SCCA. He regularly beats many “faster” cars thanks to the lighter weight and great handling of his Civic wagon. Fortunately he hasn’t gotten “helpfully” moved to the front wheel drive classes because it’s a Civic, the way I did the time I rallycrossed mine. Justin’s no slouch behind the wheel, either, as you can see in his videos.

They don’t make cars like this anymore, and I wish they did. Sure, it doesn’t have Bluetooth, navigation, stability control, ABS, and eleventy zillion air bags. But it also isn’t a big, bloated, overweight crossover. This is a fun-to-drive small car with all of the utility of a crossover. Unfortunately these wagons have all but disappeared, being prone to rust like other Hondas of its era. I’d love to own a wagon like Justin’s, but even if I could find one at a reasonable price, I can’t justify driving another one through a New England winter and contributing to its death by rust. To get a similar package these days, I have to either get a crossover, which usually aren’t fun to drive (the Mazda CX-5 being a notable exception but still not as fun as this Civic), or an expensive luxury sedan, since Audi has paved the way for BMW and Mercedes to follow with all wheel drive models. There’s also Subaru, which, in going more mainstream, has engineered the fun out of many of their cars to appeal to the masses. The WRX is an exception, which I’ll be learning more about very soon. But after experiencing the RT4WD Civic wagon one more time, I’m pretty sure that this will be the benchmark I’ll be comparing it to.