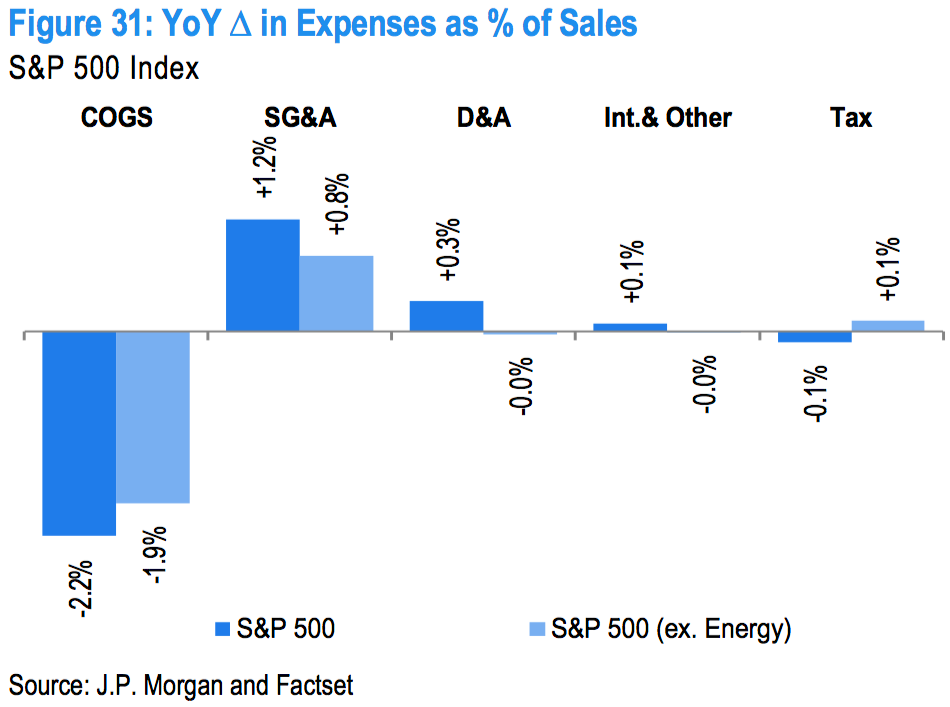 JPMorganLow cost of goods have kept profit margins high. But wage inflation has been pushing up selling, general and administrative expenses. Something’s gotta give.

GUNDLACH: If manufacturing isn’t a good indicator of the US economy, then explain this chart

Get ready for a crappy Q4 earnings season

Corporate profit margins have been so high for so long that increasing numbers of experts warn that they’re doomed to revert back toward some lower long-term average.

Now that wages are showing signs of rising, it’s a bit surprising that margins haven’t crumbled already. After all, labor costs represent the largest component of corporate costs.

Of course, you can’t forget about falling commodity prices. And commodities literally go into everything.

At some point, you might think something’s gotta give.

“All good things come to an end,”JPMorgan’s Dubravko Lakos-Bujas said. “Absent a major decline in the US dollar, rising input prices (i.e., wage pressure) coupled with low productivity growth (maturation of the current cycle and declining utilization rate) will begin to spill over into the income statements next year. In the best case scenario, margins remain flat for the year but our base case view expects some margin contraction.”

On commodity costs and wage inflation, he added (emphasis ours):

… So far YTD, declining [cost of goods sold] as % of sales (raw materials) has been the driver for margin expansion YTD, see Figure 31. Declining commodity costs were a significant driver of gross margin improvement with COGS as % of revenue declining from 64.1% in 2014 to 61.8% in 2015. We believe the expected decline in 2016 is likely to surprise to the upside given our reflation thesis.

Wage inflation — not if, but when. SG&A as % of revenue is expected to increase with the expanding labor force and an expected pick-up in wage inflation. However, the degree of impact from wage inflation will vary from industry to industry. Actual SG&A as % of sales should come in lower than expected given conservative 4Q15 estimates but the delta between 2015 and 2016 should be greater than the +0.2% as currently expected by consensus…

The first chart is one we saw back in October. Simply put, a downturn in profit margins has historically been followed by recessions. And the key force that’ll tip that correction in profit margins will be rising wage costs. See this chart from Gerard Minack: “The Street and some Strategists have held a pessimistic view on margins for much of last year and argued for a case of margin compression,” Lakos-Bujas said. “A year later, some may finally get the story right on margins.”