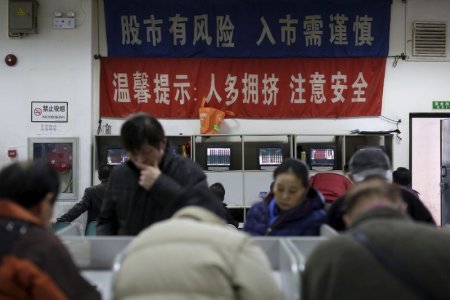 SYDNEY (Reuters) – Asian shares crept off four-year lows on Wednesday as China’s efforts to stabilize its currency brought a moment of calm to equity markets, even as oil marked a sorry new milestone under $30 a barrel.

Gains were guarded with MSCI’s broadest index of Asia-Pacific shares outside Japan inching up 0.25 percent and away from its lowest since late 2011.

Investors were again watching where the People’s Bank of China sets the yuan after two sessions of firm fixes.

The central bank has also engineered a huge leap in yuan borrowing rates in Hong Kong, essentially making it prohibitively expensive to short the currency.

Also on the docket are Chinese trade data which usually come out around 0200 GMT (2100 EDT). Recently the yuan numbers have come first followed as much as an hour later by figures in U.S. dollars.

Further falls in exports and imports are widely expected but any downside surprise could shatter the market’s fragile peace and send stocks sliding anew.

Both the Shanghai Composite Index and the CSI300 index finished Tuesday with a handful of gains but were both down around 14 percent for the year so far.

Shares of Apple rose 1.5 percent on a broker upgrade, underpinning the broader market.

Commodities had no such luck as plentiful supplies and subdued demand ate into energy and industrial metals prices.

Benchmark Brent was quoted 81 cents lower at $30.86 a barrel. U.S. crude has fallen 17 percent in just seven sessions, a gift to consumers across the globe but also a strong force for disinflation.

The prospect of lower inflation for longer proved a tonic for fixed-income assets with U.S. Treasuries rallying hard. Yields on 10-year paper fell 6 basis points to 2.10 percent having touched a 10-week low.

Investors in turn continued to scale back expectations on how far and fast official rates might rise, even as many Federal Reserve members played down offshore factors.

The relentless drop in oil also took a toll on currencies with economies leveraged to the fuel, including the Russian rouble and the Canadian dollar which slid below 70 U.S. cents for the first time since May 2003. [CAD/]

Sterling was another loser after surprisingly weak factory data sent the currency to a 5-1/2-year low. [GBP/]