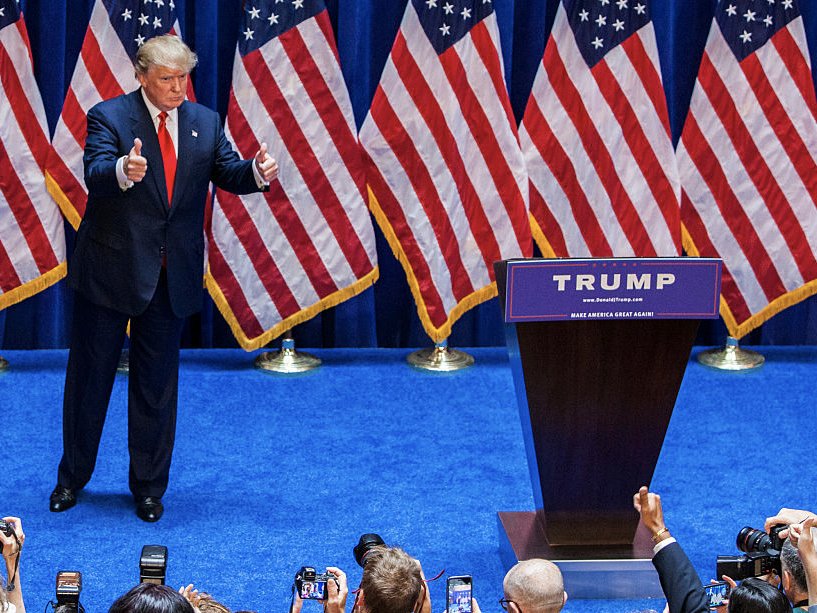 It’s possible that no president in modern history has had as much attention paid to his clothing — and how he presents himself — as Trump.

For better or worse, Americans expect their presidents to look (and behave) a certain way. Looking “presidential” isn’t a specific quality, and it’s one that’s hard to pin down, but it’s essential to have in order to be elected to the highest office in the land. Or, it used to be essential anyway.

Trump was known for his trademark hair and style well before he became a politician, but now that he’s president, there’s understandably a renewed focus on how he’s presenting himself. And yet, Trump hasn’t changed much about his style except for one noteworthy event, his address to a joint session of Congress in February.

Let’s see how he’s looked through his campaign and presidency thus far. When Trump announced his candidacy in June 2015, he wore what would become his default “big speech” uniform.

It consists of an un-tailored, blue, off-the-rack suit, usually worn unbuttoned and with a fire-engine red tie. The pants, especially, were excessively baggy. It’s also the first time we saw Trump wear the American flag lapel pin, though it certainly wasn’t the last.

We also get the first peek at the too-long tie, which would become a Trump signature. By the time Trump accepted the GOP nomination at the 2016 Republican convention, his uniform had essentially remained unchanged.

This time, however, Trump switched it up with a slightly shiny suit likely made by his favored label, Brioni. The issue here was that the fabric tended to look wrinkly. Trump didn’t switch up his style for the debates, either, sticking with the same shiny suit and either a red or blue tie.

Here, we can see how the shoulders of the jacket created a divot when he moved his arm, indicating it didn’t fit quite right. Inauguration Day didn’t mark a big change to how Trump dressed himself, but we did start to notice that he tapes the back of his tie. Because the tie usually runs so low and there’s not enough extra fabric, the tail of his tie does not reach the keeper loop — that ring of fabric attached to the back of your tie, which keeps the tail from peeking out.

Short story made shorter: The tie is not being tied in the correct place, causing multiple issues. He fixes that with Scotch tape. In his first speech to a joint session of Congress, Trump wore a suit that looked markedly different from his usual get-up.

He ditched the shiny blue suit for one a few shades darker, and he even decided to button the jacket. The difference was striking.

The tie wasn’t completely new — we’d seen this striped blue number at rallies and campaign events. However, paired with the new suit it created a subdued, commanding look. Even the jacket’s cuffs fit just about perfectly.

He looked, in a word, polished. That evolution didn’t last, though. Trump was back to his old tricks of absurdly long, fire-engine red ties and unbuttoned coats soon enough.