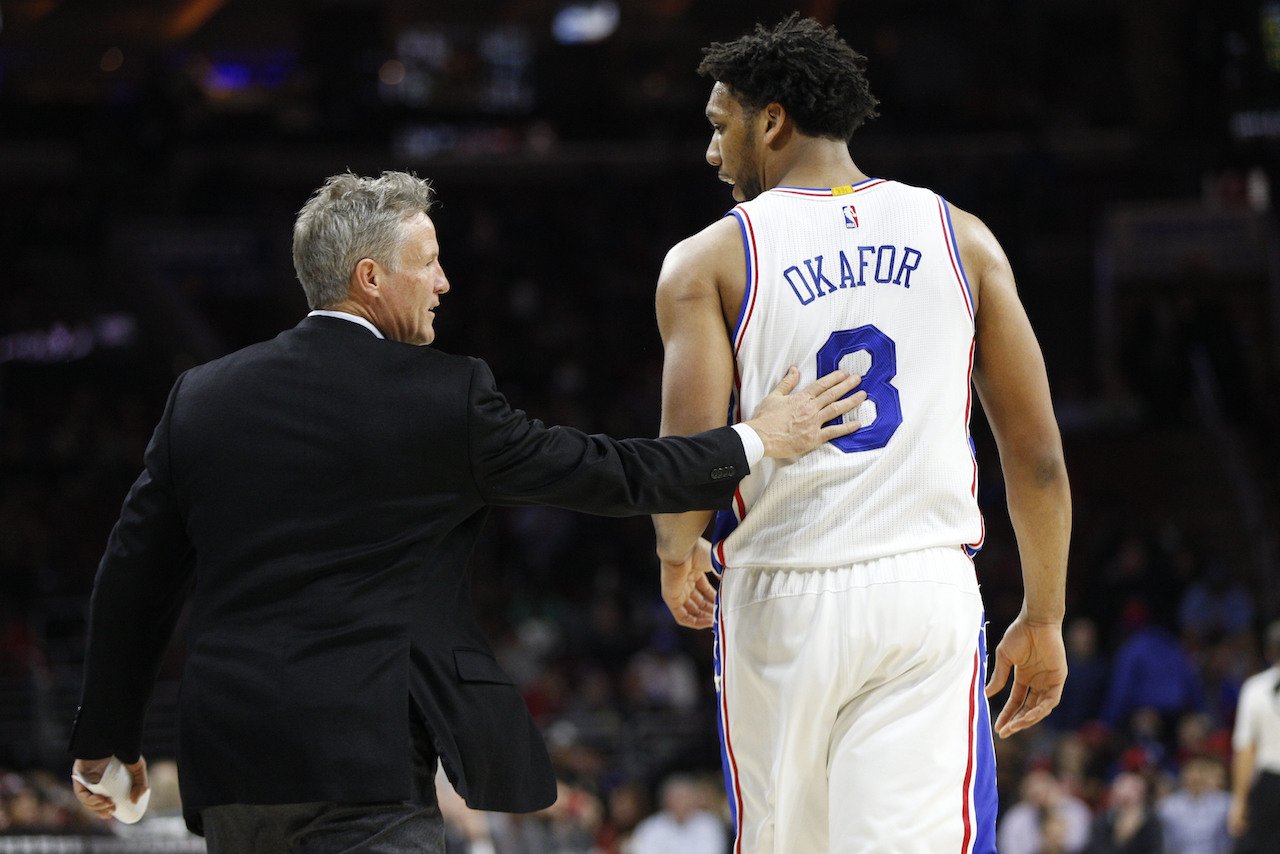 If the NBA’s 82-game regular season can feel like a grind for every team, this year has to feel like an entirely different beast for the Philadelphia 76ers.

The Sixers dropped to 9-58 on the year after losing big in Brooklyn on Tuesday night, and are now projected to have one of the four worst regular season records of all-time. Winning is not, of course, the franchise’s top priority at the moment, nor has it been for the past three seasons. But the notorious “Process” has come under fire even more than usual this year.

Between Jahlil Okafor’s incidents off the court, the mystery of Joel Embiid’s health, and the effective demotion of general manager (and Process architect) Sam Hinkie, the 76ers still look a ways away from basketball normalcy, much less the playoffs.

All of which presents head coach Brett Brown with a slightly different job description than your average NBA head coach. Instead of worrying about minutes, or which lineups will best suit his team come the playoffs, he’s often tasked also with simply keeping the season interesting for his players amid a flurry of blowout losses.

One way he does this is by making his players give the whole team PowerPoint presentations about things completely unrelated to basketball.

“Throughout the course of the year we have team breakfasts where we give somebody a topic and they work in conjunction with our video department and they produce a PowerPoint talk,” Brown told ESPN’s Zach Lowe on Lowe’s podcast, The Lowe Post. “It’s probably once a month. I let them choose the topic.”

Brown said that topics of the presentations have ranged — everything from gun control to whether or not NCAA athletes should be paid has been presented.

“Interesting things came up. And I enjoy that part of coaching. I enjoy that part of trying to find ways to keep a team together. I think that it’s even more important when you’re losing, and have lost like we have over the past few years to keep the group spirited. To keep the situation real. Apart from sort of the philosophical approach to culture building, I enjoy it. I like talking to my guys on different levels like that.”

He also revealed that during a free day in New York City earlier this week, he took his team to the planetarium to hang out with Neil deGrasse Tyson and pick the astrophysicists brain.

“I know from a team-building, or just a keeping-the-season-interesting perspective, I believe it achieves something these guys will remember.”

The strategies Brown is employing almost sound like something you hear about a college team, and considering how young the Sixers players are, you have to wonder if he’s thinking about it this way.

The Sixers have said they plan to make real moves towards building a competitive team this summer, and depending on how things shake out down the stretch of the regular season, they could have as many as three first-round draft picks this summer.

But let’s hope that even if the team looks entirely different next season, their team breakfasts and PowerPoint presentations are still a staple of the team.