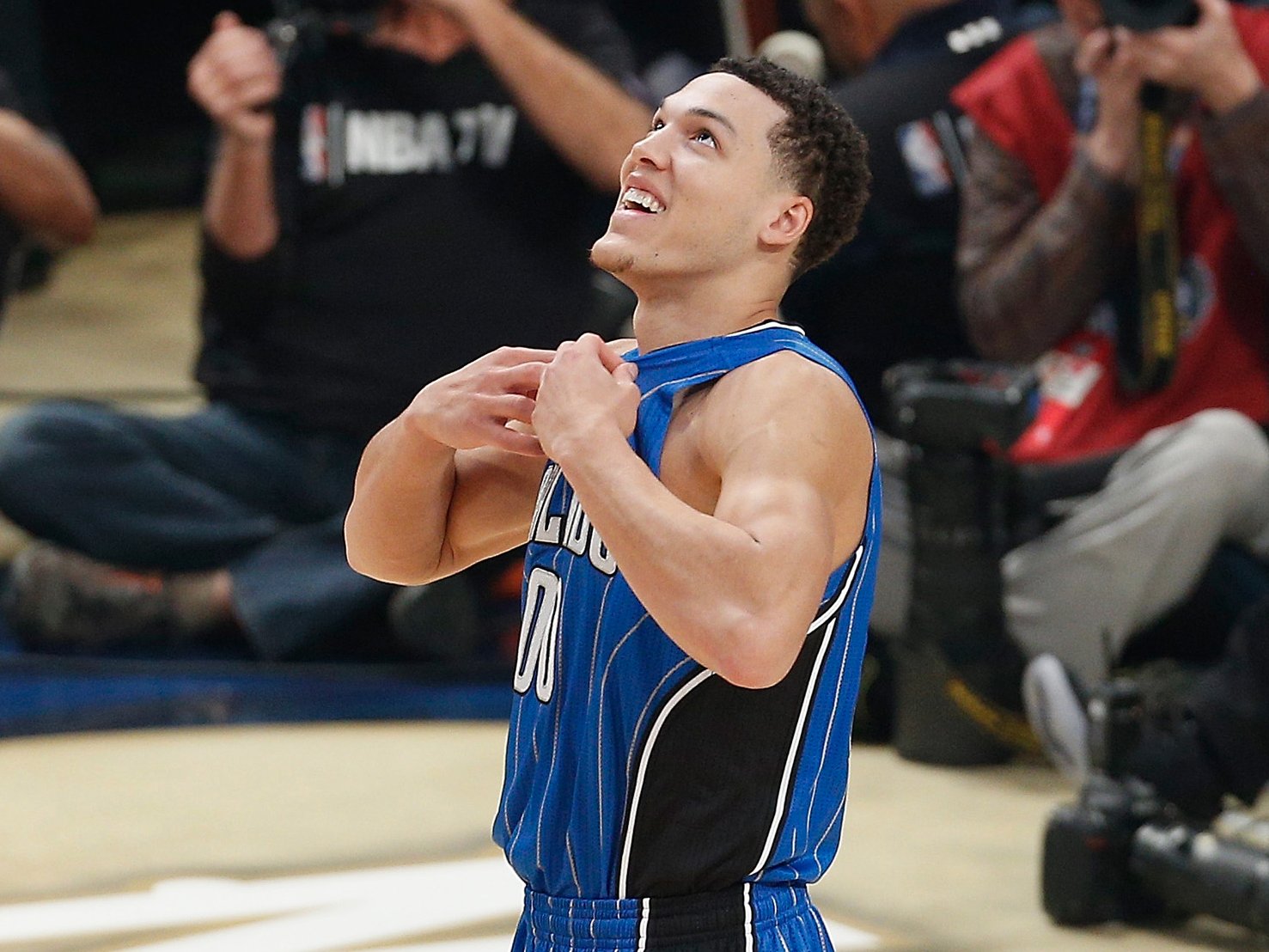 Aaron Gordon was eliminated from the dunk contest after two rounds.Jonathan Bachman/Getty

On February 19, Aaron Gordon experienced one of the lowest moments of his young career.

Tasked with headlining the 2017 All-Star Dunk Contest after a jaw-dropping performance in 2016, the 21-year-old Orlando Magic forward simply couldn’t get a dunk to go down.

On a big stage with thousands of people watching, Gordon repeatedly missed his dunks, falling out of the competition after just two rounds.

Afterward, Gordon was down on himself. In a hotel room in New Orleans, Graham Betchart was there to pick him back up.

“Guess what,” Betchart told Gordon. “We’re still talking. So that means you’re not dead. … You didn’t die.” It was just a dunk contest, Betchart stressed. There’s more to life.

Gordon and Betchart didn’t need to talk much, but for Gordon, having worked with Betchart, his mental coach, for many years, the experience of learning to pick himself up and move on helped him get over the incident.

Increasingly, around the NBA, other players are looking toward Betchart to learn those same skills. In today’s era of the NBA, players are specializing every skill. Players might have a shooting coach, a ball-handling coach, a nutritionist, a strength coach — all to zero in on specific skills and enhance their careers. As the competition mounts across all areas of the league, players need new areas to gain an edge. The next step: mastering the mental side of things.

Betchart, 38, was intrigued by the idea of sports psychology in the early 2000s and sensed there was a developing market for mental coaching. He began his career by working with youth basketball teams, teaching the idea of being mentally strong, washing away nerves, pressure, and fear of failure at various camps. Betchart developed his own company, Play Present, even writing a book of the same title on the subject in 2015. In 2016, Betchart sold Play Present to Lucid, a Bay Area-based mental training app for athletes that costs $99.99 a year, for an undisclosed amount, according to Vice.

Over the years, Betchart has built an impressive clientele in the NBA, the result of the tiresome job of preaching his ideas to young basketball players. Betchart now works with a list of players including Gordon, Philadelphia’s Ben Simmons, Minnesota’s Karl-Anthony Towns, Andrew Wiggins, and Zach LaVine, Boston’s Jaylen Brown and Marcus Smart, Dallas’ Dwight Powell, and many others.

Betchart said that early on, he stressed teaching young players who are more driven and focused. Then, as they worked toward being a professional, he was there to help them. Additionally, it’s easier to teach these ideas to younger players, he said.

“We all go through stuff in life, right? Life is full of stuff that happens. We’re gonna go through hard times, that’s totally normal,” Betchart told Business Insider. “But if they get to 25 years old or so, mid-20s, and they have a lot of these tools, and they’ve done a lot of the mental training and they’re aware and they know how to be present and they know how to deal with feelings, then they’re gonna deal with these situations that occur in life much better, and they’re not gonna completely derail them.”

Powell, like most of Betchart’s clients, met Betchart at a young age when Betchart was speaking to his team at Stanford. Powell was skeptical of Betchart’s ideas, but as his career went on, he, too, wanted to find another way to gain an edge on the competition.

“You realize there’s only so much you can do as far as putting in time every day on the court or in the weight room or watching film,” Powell told Business Insider. “You have to really maximize it, so the mental side helps you take full advantage of the time that you spend working on your craft. I think it’s those periods in your career where you kind of see plateaus or even dips in development, I think that’s when you start looking for answers or and you start kind of looking back through kind of your Rolodex of things you’ve done in the past.”

Betchart’s day-to-day routine has changed since getting acquired by Lucid. He says he works more on the promotional side of things and records audio lessons for the app at his home studio. After years of working in what he calls “start-up mode,” he’s thankful for the change, noting that trying to form relationships with players, traveling, and making a footprint in the basketball world had put a strain on his life.

However, Betchart still maintains relationships with those players and is there when they need to talk.

“My work with athletes is pretty random,” Betchart said. “They’ll just text you and wanna check in. They’ll give you a call randomly. … There’s no real routine with the players I work with except that they know I’m here. … It’s just being available and being there when they call.” Mavericks forward Dwight Powell was skeptical of mental coaching, but has embraced it recently.David Zalubowski/AP

Betchart’s lessons vary, but they all seem to have one underlying message — don’t stress over what you can’t control. For NBA players, that can be a multitude of things.

“They’ll come to you with a situation that’s out of their control, like coaches, like referees, like a contract, or for the simple matter that nothing is fair in basketball. There is no fair. It doesn’t work like that,” said Betchart.

“So, what you’re really helping them do is learn to focus on things they can control and let go of everything else. It’s hard because you basically don’t control anything. You control your ability to focus on this moment, be present, and then focus on the task at hand.”

Gordon, who met Betchart when he was 11, was almost immediately intrigued by the idea of mental coaching.

“I was open-minded and inquisitive as a kid, so I was all for it,” Gordon said. “I’m a very analytical and contemplative person, so sometimes that gets in the way of basketball. What I was looking for was to really think the game, as an intellect, but then once you get on the court, let that go, feel free and flow, and play the game.”

Gordon said one of the lessons he values most is the idea of having a “next-play mentality” — whatever happened happened, so move onto the next play. That can be an important lesson off the court, too. Betchart said after LaVine tore his ACL in February, he was almost immediately on the phone with the young Wolves guard and his agent, plotting the surgery, rehab, and how to move on.

Powell said he enjoys the lesson of visualization — imagining a play or game beforehand, envisioning what he wants to do, then going out and trying to do it.

“When he first walked us through visualizations and talked to us about the value of them and how to prepare your mind … I was very skeptical because I thought I’m just playing a movie in my head,” Powell laughed. “But that’s something I continue to even do on a more frequent basis, rather than just before the game. It’s before each play, before each scenario, you kinda can walk yourself through it. It calms you down, it prepares you and I think it’s something really valuable.”

‘An iron fist and a velvet fist at the same time’

Betchart’s lessons must strike a fine line between compassion and competitiveness, as he puts it. There’s room for understanding, but often times, players have to accept a “deal-with-it” type of mentality.

“You have to have an iron fist and a velvet fist at the same time, and you have to know when to use them both,” Betchart said.

“You have to use these two words at the same time together: competitive compassion. And I try to teach them these two words. Competitive: you have to want that ball. You have to want to want it more than that person next to you if you want a rebound. And then you have to develop compassion, that if you go for it, you go all-in, whatever happens after that, who cares? Be at peace. Because you might go all in, do everything right, and that person next to you is simply better… If you beat yourself up after that and you’re hard on yourself, you’re not gonna make it.”

The message seems to be resonating with players. Boston’s Jaylen Brown says the training has helped him develop in his first pro season. Powell said he finds himself using the lessons more and more. Gordon says the lessons have helped him think about his future after basketball.

“Lucid gives me the confidence to believe in myself enough to where after my career I have a capability and potential to be anything I wanna be,” said Gordon, who is also a spokesman for the company. “And that goes with understanding who I am as a human being. So they go hand-in-hand.”

Powell and Gordon both would recommend the idea of mental coaching to other players, young and old alike. However, perhaps Brown best summarized the impact of this emerging skill.

“I wouldn’t recommend it because I’m trying to beat some of those players out. I don’t want them to pick up on the stuff [that helps] me get a mental edge. But it’s definitely helped me so far.”