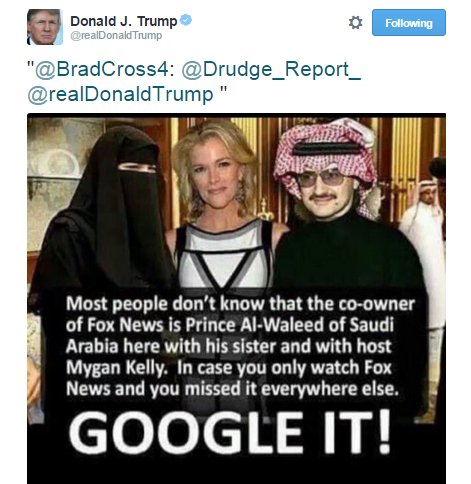 Billionaire Saudi Prince Alwaleed bin Talal fired back at Donald Trump on Thursday after the Republican presidential front-runner promoted a fake photo of him to attack Fox News.

The text on the photo claimed that Alwaleed was a “co-owner” of Fox News. The network is hosting the Thursday-night debate that Trump is boycotting.

But Snopes.com and PolitiFact found that claim mostly false. They reported that Alwaleed’s investment company owned a small percentage of 21st Century Fox.

Alwaleed, who reportedly once bought Trump’s yacht, tweeted back at Trump while claiming to have “bailed” him out multiple times:

Alwaleed wrote that Trump’s proposal to bar Muslims from entering the US was “a disgrace” and called on the real-state mogul to withdraw from the presidential race:

.@realDonaldTrumpYou are a disgrace not only to the GOP but to all America.Withdraw from the U.S presidential race as you will never win.

Dopey Prince @Alwaleed_Talal wants to control our U.S. politicians with daddy’s money. Can’t do it when I get elected. #Trump2016

NOW WATCH: Here’s how much the presidency ages you