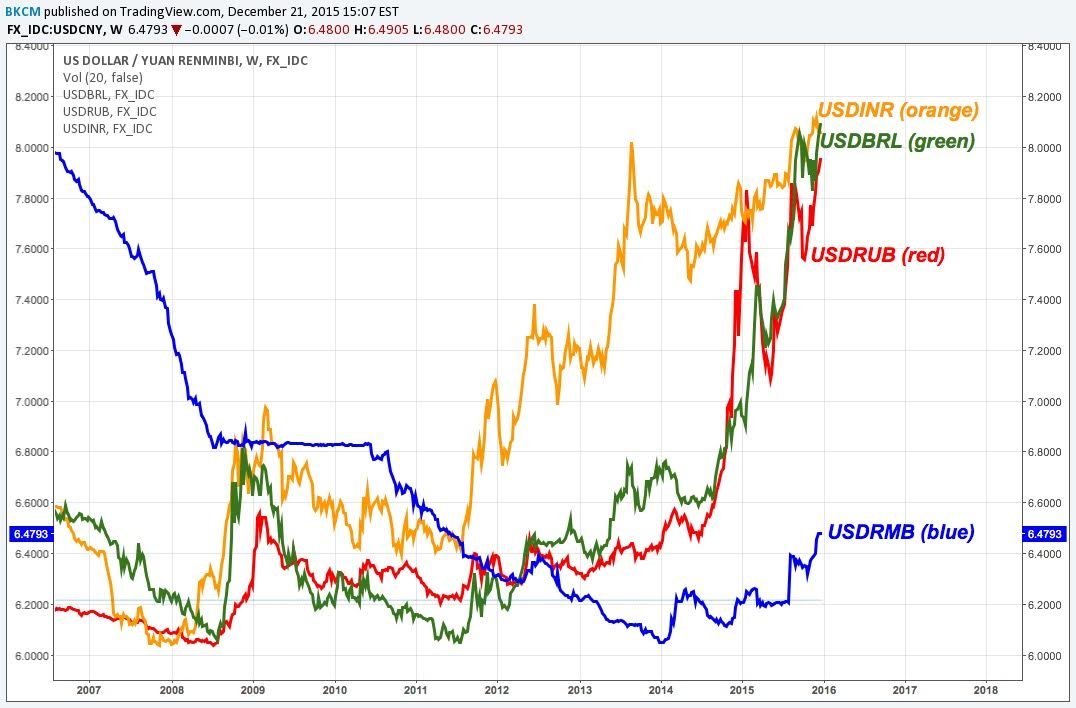 If you thought 2015 was the bottom for emerging-market economies, think again.

Things will only get worse for Brazil, Russia, India, and China — otherwise known as the BRIC countries — in 2016.

He sent Business Insider one chart to illustrate that point. It’s the US dollar versus BRIC country currencies. “In particular, look at how much the Ruble, Rupee, and Real have depreciated while the RMB has just begun its depreciation. This means there is a lot more volatility to come in 2016,” said Kelly.

The year 2015 has been a big year for the yuan. In August, the People’s Bank of China, China’s central bank, devalued the currency by 2% after some economic indicators, including exports, started flashing red.

Then in November, the yuan was accepted into an elite group of global reserve currencies with special drawing rights designated by the World Bank. To make the cut a currency has to be widely used and fairly stable.

Since then, though, the currency has headed downward. Here’s what Societe Generale analyst Kit Juckes wrote about the yuan, and its impact on other currencies, on Tuesday:

The other market mover this morning was a higher USD/CNY fix (6.4895) and a jump in USD/CNH to 6.6. That’s a fall of almost 6% in the second half of this year, which has seen it weaken over that period against all the G10 currencies bar the oil-sensitive CAD and NOK. A 12% jump from the lows in NZD/CNH, in particular, stands out. Surely the kiwi is vulnerable in 2016?

Earlier this month the Chinese government floated the idea of decoupling the yuan from its current peg, the US dollar, and coupling it to a yet-undisclosed basket of currencies instead.

That could be a way for the government to allow the yuan to fall in value without it becoming an official devaluation.

NOW WATCH: China is abandoning its one-child policy after more than 30 years