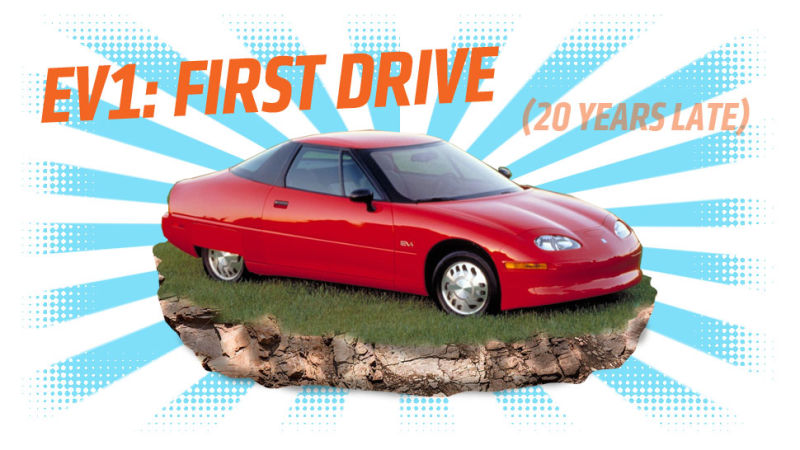 Once, long ago, I was like many of you: a young, beautiful gadabout, ready to drink lustily from the frothing cup of life. One particular quaff of that cup is significant, because it involves a short drive in the shining but infamously doomed General Motors EV1, and 2016 will mark that car’s 20th anniversary. In honor of this, I’m going to try and write a hazy, barely-remembered review.

I arrived in Los Angeles in 1997, full of rich, juicy hopes and dreams that LA would soon masticate into a fine moist paste. The date and location is significant, because it put me in the right time and place to be one of the comparatively few people to actually drive an EV1.

I was always interested in cars, cars of all kinds, so when I learned that the EV1 existed, and even better existed near me, I knew I had to try one out. (Interestingly, I learned about the EV1 through a type of website that was much like what we have today, but it took about a month to load a new edition, and was displayed on something that looked sort of like an iPad, but was floppy, and composed of many, very thin sheets, bound together with staples or some similar unholy magic.)

The EV1 was pretty big news. Electric cars that weren’t designed to haul plaid pants, golf clubs, and 180 pounds of old man meat hadn’t really been seen in any numbers on American roads for decades. People were excited by the idea of it, and while gas was still relatively cheap, it wasn’t that cheap, and the eco/green movement was really gaining momentum and popular support (remember Captain Planet and all that crap?) in the ‘90s.

Plus, and this is also hard to imagine today, but Saturn, the GM division whose dealership network was tasked with leasing the EV1, wasn’t seen as quite the sad joke we see it today. Back in the ‘90s, it was still seen as at least a somewhat competitive and forward-thinking division of GM. Even by many of the people who drove their cars! I guess those dent-resistant body panels carried more status back then.

Remember, the ‘90s were a period of unrestrained, rogue shopping carts. The EV1 even resembled the Saturns of the period, and even though it was branded as a GM, some of its lustre rubbed off on the rest of the Saturn line.

I actually remember the test drive better than I realized, now that I think about it. I remember driving in my Beetle to a Saturn dealer in, I think, downtown LA. As usual, whenever I pulled up at a dealer in my old Bug, half a dozen sales people would bolt out to me, promising that they could “put me” in something they had on the lot that day. I was never interested, but this time I was at least curious.

The salesguy was actually quite pleased to let me take a test drive in the EV1, even though I made it clear I was mostly just curious about the car and technology.

“You’re so young, so alive!” he gushed. “These thick, raven locks,” he added, running his hands through my hair. “It’s hard to believe in less than 20 years a ridiculous-looking, Oreo-sized bald spot will soon be here. Also, look how thin you are.”

Maybe that’s not quite how it went. 1997 was a long time ago, remember.

What I do remember is that the car was impressively futuristic looking and feeling. It was smaller than you’d expect, and yet oddly longer, mostly thanks to the pronounced teardrop shape, with its long, tapering tail. I remember asking about the rear wheel skirts, and being told they added a whole extra mile of range to the car.

Everything was flush and sleek feeling, almost aeronautic. It all felt significantly better built than the other GM products I was familiar with, which isn’t shocking.

Inside, the EV1 didn’t disappoint, having exactly the kind of spaceship-feel that you wanted a car like this to have. At the time I remember being impressed, but with the benefit of hindsight (which is, after all, always 6’4″ or something) I realize now what a shitshow that interior really was.

What was dazzling about it was the sheer ‘80s/’90s electronics-era complexity of it all. The center console looked like something out of a fighter jet, with the gear selector standing in for a control stick, and everything was surrounded by tiny black buttons with fussy white icons and labels.

It looked and felt like a lot of high-end audio and other electronics of the era, but actually finding a control would be a colossal ass-pain. Adjusting the defroster was an act that could possibly involving pulling over, leaning over the center console, putting on reading glasses, and taking a moment to move your finger up and down until you found the tiny black button with the correct almost indistinguishable tiny icon.

The instrument display was in an exciting band that wrapped all around the base of the windshield, with seven-segment VFD numbers in a pod in the middle. It looked cool, but reading various warning lights and messages required you to swivel your head around a whole 180° field of view.

The inside was quite cramped as well, with a massive central tunnel housing the lead-acid battery pack commanding much of the center of the car.

Still, the seats were comfortable, and once you got settled in, you got the rewarding experience of feeling like you were at the helm of some complex spaceship, which, you sort of were. I mean, it did move through space, just on the surface of a planet. On decent roads. No more than 70-100 miles away from a charger.

Actually driving the car was surprising, in that, like most Americans, I’d never driven anything electric with any amount of power. I bet a bumper car represented my most sporting electric vehicle experience up to that point. So stomping the gas and feeling that instant torque from the EV1’s 137 HP motor was, and I don’t think this is overstating my reaction at the time, astounding.

The thing could move! On the straights, it accelerated reasonably well, and held the line like a massive torpedo, which it was. At over 3,000 pounds, it was quite heavy for a car its size, but at least the T-shaped battery pack was nice and low.

You felt the weight when steering, giving it, if I recall, a slightly ponderous feeling. Still, the center of gravity was low, it was oddly quiet, making just a world-of-tomorrow hum, so the driving experience I had was engaging, at least.

I’m not one of these people who believes GM killed the EV1 prematurely, or that there was some grand conspiracy. The truth is it was a cramped, two-seater with range only really usable in a city, and not that practical. It was an experiment, and it felt like one, and it also happened to be way ahead of its time.

Still, I think it was a successful experiment, and I believe it accomplished what GM needed: to convince people that an electric car could, potentially, become something you could use every day. I walked out of there with my mind changed on that point, and I bet many others did as well.

The EV1 has been surpassed by modern electric cars in pretty much every metric but one: the charging plug. It may sound like a mundane thing, but the charger is something you use every day with an electric car, and it needs to be well-designed.

The EV1 used the inductive Magne Charge system that used a flat paddle that plugged into a slot on the front of the car. It was relatively big, but that was an advantage—you’d just grab it by its handle and pop it into its spring-loaded slot like toast into a toaster. There was no metal-to-metal contact, no risk of rain causing an arc or shock, and the whole thing was much quicker and easier than plugging in the small, fussy plugs we have today.

It just looked and felt more futuristic, which may be why the movie Gattaca used them for all of their gloriously retro and blue-headlighted electric Avantis and Citroëns that populated that movie’s roads.

Unfortunately, the inductive charging system was relatively inefficient, so it’s all but obsolete today. I still think it should be the use-and-feel standard that other charging technologies aspire to, though.

So, my overall take from my pre-autojournalism career First Drive of the EV1? GM has a winner on their hands! By 2000, every other car on the road will be an EV1! I stake my reputation on it.