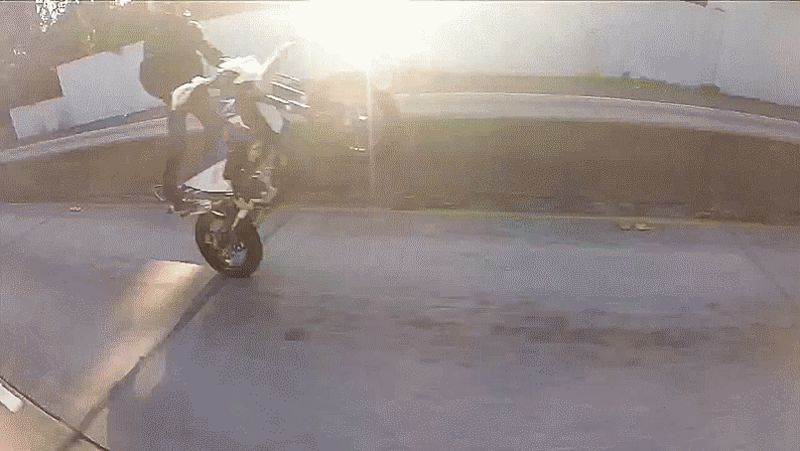 You would think that, by now, members of police forces all over the country have been in dozens of “Guys, we need to stop getting caught with our pants down” seminars. Apparently that’s not the case in the Bay Area, where the leader of a group of dirtbike riders notorious for pulling stunts on city streets has been revealed as possibly a cop in his day job.

Let’s start from the beginning.

Some of you may not spend 96 percent of your waking time riding, writing, or reading about motorcycles, and you’re likely better and more well adjusted humans than I am. That means you may have also missed the 12 O’Clock Boys thing, so here’s a quick recap.

The 2013 documentary 12 O’Clock Boysfollows around a little kid named Pug as he tries to find his place in the world, namely through a group called “12 O’Clock Boys” because they wheelie’d and stunted dirtbikes and ATVs around Baltimore.

The film was equal parts interesting, fun, and depressing. It brought some level of fame and recognition to that group of people, but more for the culture and Pug’s ridiculous quotes, but it also turned people onto a little secret: that dirtbikes and supermotos are the best bike to ride in any urban area, especially if you like to ride in ways that would make your mother blush.

Then It Spread, Because Duh

Not that people weren’t doing it elsewhere, but the idea of stunting around cities on bikes like this grew, as did people’s need to film themselves doing it so they too could be 12 O’Clock Boys. Last summer, this news article discussed how the behavior was becoming prevalent in San Francisco, and how the local police weren’t really able to do anything about it.

Believe it or not, police have pretty strict chase policies. Because chasing riders means riders are more likely to crash and hurt themselves or other people, cops often try and take down plate information instead of going for a full-on pursuit, but a lot of these guys trade plates or ride without plates, and police have struggles with a way to stop the behavior.

You Said Something About A Sheriff’s Deputy Though

Now, Bay Area CBS affiliate KPIX is claiming they have an inside source on Bay Area Supermoto (BASM), the group they claim is responsible for all of the shenanigans and tom foolery.

What’s more, is that this source (who would like to be kept anonymous out of fear of retaliation), claims that one of the guys in who runs the group/club/team/herd is a Marin County Sheriff’s Deputy and says the group “shouldn’t be worried about the police, because he is one.”


The source gave KPIX the name Zack Schlief, who KPIX claims also goes by Zack Douglas. On Schlief’s Facebook page, they found pictures of him posing in front of a Marin Sheriff’s Department car as well as photos of a bike which is easily recognizable from YouTube videos of BASM raging all over San Francisco. (Those videos have been taken down now.)

The KPIX news team ambushed Schlief, confronting him about his involvement with BASM, the dangerous riding, and his role with the Sheriff’s department. Obviously, he denied everything.

It’s not clear what’s going to happen to Schlief now. KPIX reports the sheriff’s department is conducting an internal investigation. It’s possible he has wheelie’d his way out of a job.

Despite claims that I only write about this stuff to get rich and that I’m making motorcyclists look bad, I do think we as motorcyclists need to share these sorts of stories and realize how they affect the communities we live in and general public perception. I’m all for having fun on a motorcycle, but there have to be better ways to do it.

Like driving, riding’s a privilege, not a right. You’d think a cop would know that better than most.