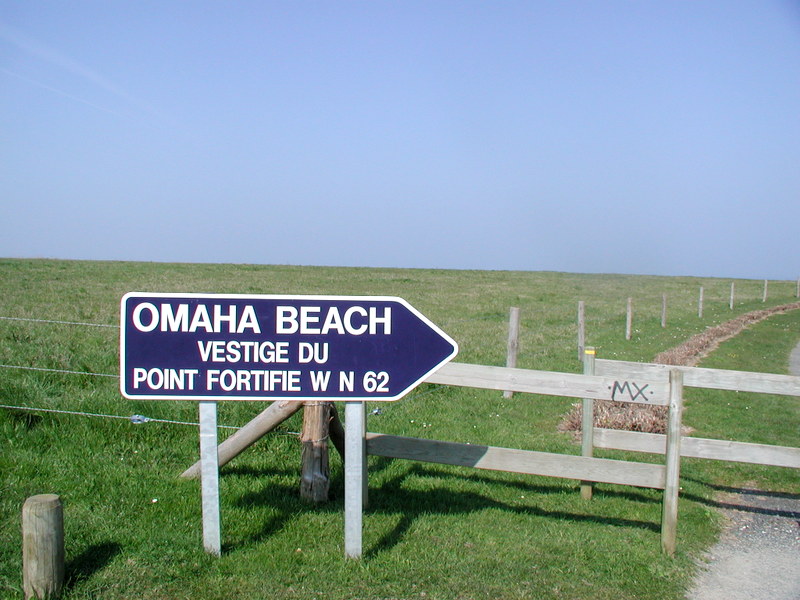 A few years ago, I visited France and got to walk on Omaha Beach. I saw Saving Private Ryan but I am here to tell you: There is nothing more dramatic or moving than seeing the beach and the cemetery with your very own eyes.

They offer tours of the Normandy Beaches but I decided it would be better to simply rent a car and look at the various sites where the Allies landed on D-Day and beyond. Not speaking French (and not being able to read the rental car contract I signed), I was left to drive around and just bump into things. The first place I found was the beach at Arromanches. There is a D-Day museum there and remnants of the invasion infrastructure still in the water.

It isn’t hard to find reminders of the war. In fact, there were WWII vehicles parked pretty much every where one looked.

This tank has a good view now but probably wouldn’t have wanted to be this conspicuous in June 1944.

I eventually found my way to Omaha Beach. There are two things of great importance here – the beach itself and the Normandy American Cemetery and Memorial. I walked around the cemetery first.

Words fail to properly describe this so I won’t bother trying. You walk by this memorial and then you see fields of headstones.

You’ve seen these images before but again, the experience of seeing them is greater than you can imagine. There are 9,387 markers here.

And if you saw the movie Saving Private Ryan, you should recognize this walk. It opens and closes the film.

Over to the side you can look down on Omaha Beach. You can also hike down to the beach which I highly recommend you do if you visit. I was there on a day in the off season and the beach was virtually empty.

And I was surprised to find structures left over from the war that were slowly being swallowed by the Earth.

Here is a view from inside that bunker. Notice that the window is not facing directly out to the sea.

And still, someone managed to fire a shell into it. After exploring, I headed down to the beach.

When I visited, it was low tide so I had a pretty good view of the distance the soldiers had to cover when they got ashore. It may have looked far in the movies; it was even farther in real life.

In this photo, my heels are at the water’s edge. two-thirds of the way up you can see the “shingle,” the first natural place a person could find cover from fire coming down from the bluffs. Imagine running that distance with a full pack on your back with someone shooting at you.

More of the terrain, looking a little more to the west.

I visited some other places while I was in France: A big palace, a pointy tower, a museum where no one spoke English. But this place – Omaha Beach – was the most moving. If you ever plan a trip to Europe, put this at the top of the list.

And I had originally planned on posting this on D-Day but now that I look at the pics and think about the time I spent there, Memorial Day is a more fitting day to remember this visit.

Steve Lehto has been practicing law for 23 years, almost exclusively in consumer protection and Michigan lemon law. He wrote The Lemon Law Bible and Chrysler’s Turbine Car: The Rise and Fall of Detroit’s Coolest Creation.

This website may supply general information about the law but it is for informational purposes only. This does not create an attorney-client relationship and is not meant to constitute legal advice, so the good news is we’re not billing you by the hour for reading this. The bad news is that you shouldn’t act upon any of the information without consulting a qualified professional attorney who will, probably, bill you by the hour.