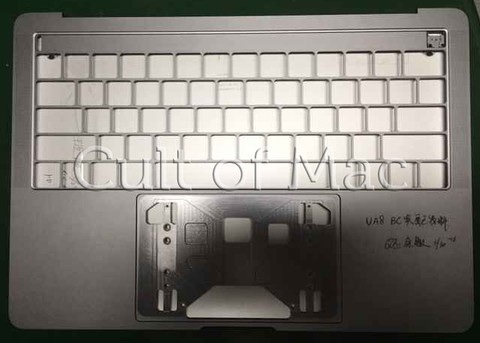 It was only last week reports claimed Apple was working on a complete MacBook Pro refresh, and now pictures corroborating these rumors have leaked. The updated laptop is said to include an OLED touch bar where the function keys should be, along with a much thinner body. According to these leaked photos, that’s not all we should expect.

Obtained by Cult of Mac, the pictures appear to show a MacBook Pro chassis ahead of final assembly. They’re suspiciously showing up not long after the initial rumors hit, but if they’re real, the leaks could indicate Apple is close to introducing a final product, with a release set for later this year.

In addition to showing an opening for an OLED bar, the MacBook Pro chassis also shows four USB-C ports and a headphone jack, with no other physical connections; no SD card reader or MagSafe 2, suggesting Apple’s next laptop is going to be a big departure from existing models, taking the groundwork laid with the MacBook and going all in on USB-C.

Finally, the chassis, which appears to be of a 13-inch model, shows speakers on either side of the keyboard. That’s notable because the current 13-inch model has speakers located at the back of the keyboard, not on the sides, which means users should get a fuller sound when the new MacBook Pro is released.

Apple isn’t expected to release any laptop refreshes until later this year, so it’s unclear how legitimate Cult of Mac’s images are. Take them with a healthy dose of salt for now.