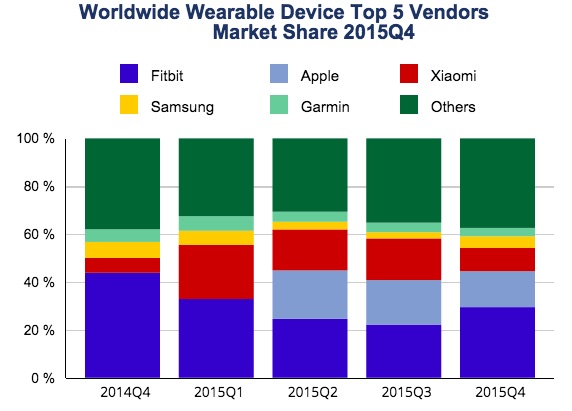 Earlier this month Apple CEO Tim Cook claimed that the Apple Watch was one of the “hottest” holiday gifts in 2015, but a new report suggests that might not be the case. According to the International Data Corporation (IDC), Apple Watch sales barely grew over the holiday shopping season despite some generous discounts.

Apple shipped just 4.1 million smartwatches in the fourth quarter of 2015. That’s a small improvement from the 3.9 million units it moved in Q3, making for just 5 percent growth in what’s typically the company’s best quarter by a wide margin. Fitbit jumped by 72 percent in Q4 to 8.1 units compared to the previous three month period.

It’s possible some customers might already be holding off for the Apple Watch 2, though the second-generation wearable probably won’t arrive until late 2016. In the meantime Apple is expected to rollout some new bands, but that may not be enough to boost sales.

On the plus side, Apple is still beating most of its wearable competition. The company placed second for total shipments in Q4 of 2015 behind Fitbit. For the entire year it slipped to third place behind Chinese upstart Xiaomi and its budget-friendly fitness tracker.