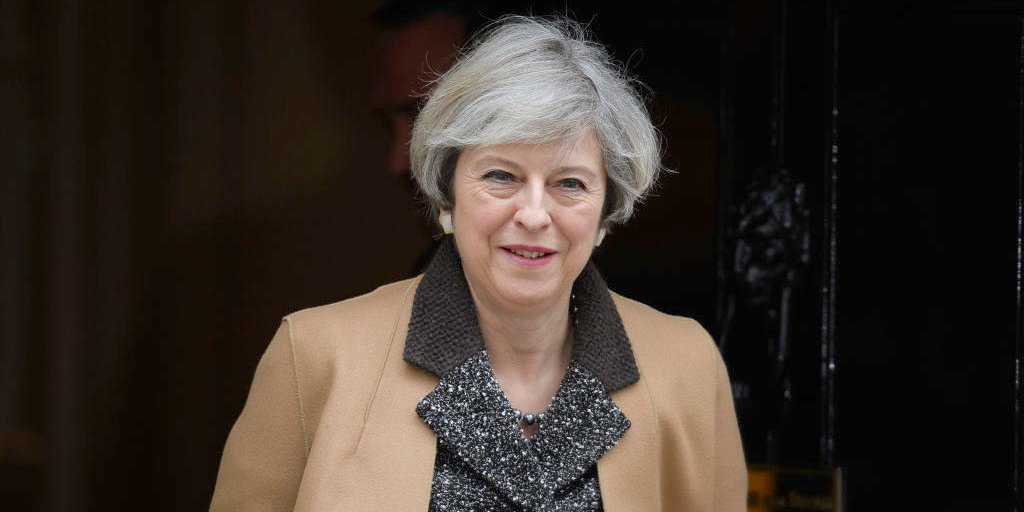 The UK’s permanent representative to the EU, Tim Barrow, will hand a letter signed by May, to the European Council President Donald Tusk on Wednesday lunchtime, formally requesting Britain’s exit from the union.

Here’s a video of Barrow arriving in Brussels.

Sir Tim Barrow arrives at the Europa building with THE LETTER 💌 pic.twitter.com/jTW1qTOvNB

Once the letter is received by Tusk, Article 50 will be officially triggered.

In a statement to MPs, timed to coincide with the arrival of the letter, May will call on the whole country to unite.

“We are one great union of people and nations with a proud history and a bright future,” she will say.

“And, now that the decision has been made to leave the EU, it is time to come together.”

May’s speech, which falls one day after the Scottish Parliament voted to hold a second independence referendum, will attempt to reach out to those opposed to Brexit.

Theresa May will tell MPs:

“When I sit around the negotiating table in the months ahead, I will represent every person in the whole United Kingdom – young and old, rich and poor, city, town, country and all the villages and hamlets in between.

And yes, those EU nationals who have made this country their home.

It is my fierce determination to get the right deal for every single person in this country.

For, as we face the opportunities ahead of us on this momentous journey, our shared values, interests and ambitions can – and must – bring us together.

We all want to see a Britain that is stronger than it is today. We all want a country that is fairer so that everyone has the chance to succeed.

We all want a nation that is safe and secure for our children and grandchildren. We all want to live in a truly Global Britain that gets out and builds relationships with old friends and new allies around the world.

These are the ambitions of this Government’s Plan for Britain. Ambitions that unite us, so that we are no longer defined by the vote we cast, but by our determination to make a success of the result.

We are one great union of people and nations with a proud history and a bright future.

And, now that the decision has been made to leave the EU, it is time to come together.”

Labour leader Jeremy Corbyn will also promise to “hold the government to account every step of the way.”

“The Conservatives want to use Brexit to turn our country into a low wage tax haven,” Corbyn will say.

“Labour is determined to ensure we can rebuild and transform Britain, so no one and no community is left behind.

“It will be a national failure of historic proportions if the Prime Minister comes back from Brussels without having secured protection for jobs and living standards.

“That’s why Labour has set the clear priorities of full access to the European market, rights at work and environmental protection. And we will hold the Government to account every step of the way.”

Here is a rough timeline of what we can expect today (all timings in GMT):

8 a.m. — May will convene a special Article 50 session of her Cabinet, in which they will discuss the formal beginning of Brexit negotiations.

12.40p.m. — The prime minister will deliver a statement to the House of Commons announcing that the letter triggering Article 50 has arrived in Brussels.

At roughly the same time Britain’s chief EU diplomat Tim Barrow will formally hand over a letter signed by May to EU Council president Donald Tusk.

ARTICLE 50 WILL BE TRIGGERED

1 p.m. — The prime minister will continue to take questions on triggering Article 50 from MPs.

Tusk has promised to respond to the letter within 48 hours, after which formal Brexit negotiations will begin.

What is Article 50 and how does it work?

Article 50 is the formal trigger for leaving the EU. Once triggered Britain will be free to leave the EU from the moment any deal is struck, or failing that, two years after notification of wishing to withdraw is given.

Britain’s membership will be formally ended by the European Council after first receiving consent from the European Parliament, which will also have to ratify any exit deal that is negotiated.

How long will negotiations go on for?

There are two major parts to negotiations — settling the divorce and then agreeing the ongoing relationship. The UK government is keen to get trade negotiations underway immediately. However, the EU’s chief negotiator Michel Barnier has insisted that the divorce must be settled before any other discussions can begin. “

“Agreeing on the orderly withdrawal of the UK [must happen] before negotiating any future trade deal,” he wrote in the Financial Times this week. “The sooner we agree on these principles, the more time we will have to discuss our future partnership.”

The main issue in divorce talks is the question of what bill, if any, Britain will pay the EU when it leaves. Britain’s former permanent representative to the EU, Ivan Rogers has previously suggested that the other 27 EU countries will be angling for a bill of up to £60 billion, while a growing number of Conservative backbenchers believe that the UK should not be liable for any divorce bill at all. Reconciling those two wildly opposing expectations is likely to be the toughest early test for May.

These talks could leave May with very little time to negotiate a new trade deal with the UK. Although Article 50 is a two-year process, she must take whatever deal she has secured forward for ratification by both the UK and EU parliaments after just 18 months.

Can the two-year negotiation process be extended?

In theory yes. But it would not be easy. Doing so would require unanimous consent from the European Council in agreement with Britain. Neither side has so far left the window open for such an outcome.

Can Article 50 be revoked?

We do not know for sure. However, Lord Kerr, who wrote Article 50 believes it can be.

“It is not irrevocable,” he said last November.

“You can change your mind while the process is going on.

“During that period, if a country were to decide actually we don’t want to leave after all, everybody would be very cross about it being a waste of time. They might try to extract a political price but legally they couldn’t insist that you leave.”

Most international organisations allow a “cooling off” period between the notification of withdrawal and the moment that countries leave them. In 1928 Spain famously decided not to withdraw from the League of Nations shortly before their withdrawal was due to take effect.