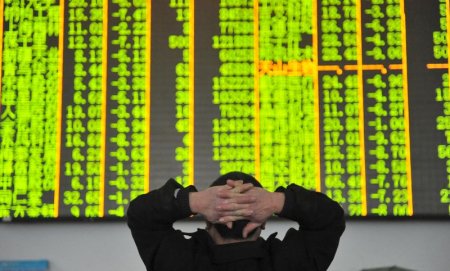 SYDNEY (Reuters) – Asian shares rebounded on Thursday as speculation the U.S. Federal Reserve might opt to not raise interest rates at all this year hammered the dollar and sparked a huge rally in oil prices.

By some measures the U.S. currency suffered its largest one-day percentage drop outside of the crises of 1998 and 2008, symptomatic of just how crowded bullish positions had been.

The sudden reversal provided a much-needed boost to beleaguered commodities, sending oil up no less than 8 percent, and easing pressure on energy shares and risk appetite.

Japanese investors, however, seemed unhappy with the yen’s newfound strength against the dollar and nudged the Nikkei down another 1 percent.

Wall Street had taken its cue from oil and recouped early losses on Wednesday, in a wild session that saw the Dow swing in a 420-point range.

Traders were unsure what triggered the dollar rout though many pointed to comments from Federal Reserve Bank of New York President William Dudley that tighter financial conditions would be taken into account at the next policy meeting in March.

In an interview with Market News International, Dudley also warned that a sharp rise in the dollar could have “significant consequences” for the U.S. economy.

Investors took that to mean the Fed did not want to see the currency rise any further and might delay further increases in interest rates. Futures markets had already priced out almost any chance of a hike in March and imply a funds rate of just 0.51 percent by December .

The impact was amplified by a surprisingly soft reading on the U.S. services sector, just the latest in a string of disappointing economic indicators.

The market reaction was swift and violent with the dollar collapsing through a host of key chart levels and triggering waves of stop-loss selling.

Early Thursday, the dollar was down at 117.94 yen having shed 1.7 percent overnight in its biggest daily drop since August.

The fall wiped out all the gains from the Bank of Japan’s decision to cut its rates below zero, a tit-for-tat response that only to added to market suspicions central banks were engaged in a war of competitive depreciations.

The drop was a boon to commodities priced in U.S. dollars, lifting everything from copper to gold to oil.

U.S. crude added another 20 cents in early trade on Thursday to reach $32.49, having jumped 8 percent overnight.