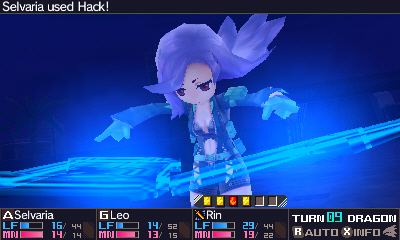 Because there just aren’t enough JRPGs on the Nintendo 3DS this year, SEGA has tossed another promising title onto the pile with its clumsily titled 7th Dragon III Code: VFD.

The game is the fourth release in SEGA’s handheld RPG series, but it will be the first to get an official English release. The original 7th Dragon was a Nintendo DS game directed by Phantasy Star and Skies of Arcadia legend Rieko Kodama, and fans immediately fell in love with it. Sadly, calls for its English release never panned out. Two Kodama-produced sequels were released on the PSP in Japan, but again, no English support was ever given to them.

All that changes with this final game. 7th Dragon III Code: VFD will be released this summer on the Nintendo 3DS for $39.99. SEGA has also provided a description to bring English speaking fans up to speed.

In 7th Dragon III Code: VFD, the world is engulfed in a time of darkness and great peril. In the year 2100, dragons have descended upon Earth and humanity is at the mercy of these terrifying beasts. However, not all is lost. As the protagonist, the player will team up with Nodens Enterprises — a video game company dedicated to stopping the dragon menace — to become a dragon hunter and eventual savior of the universe. Although times are bleak, Nodens Enterprises has found a way to tip the scales in favor of mankind: By traveling through time to three different eras, the protagonist can upset the balance of the dragons’ power. This will give them the edge to defeat the True Dragons, and stand a chance against the most powerful one of them all… the 7th Dragon: VFD.

Looks quite good! I’ll keep an eye out for this one. And if you want to play the original 7th Dragon in English, a fan translation does exist. Seek it out if you want your butt kicked by some old-school JRPG design.