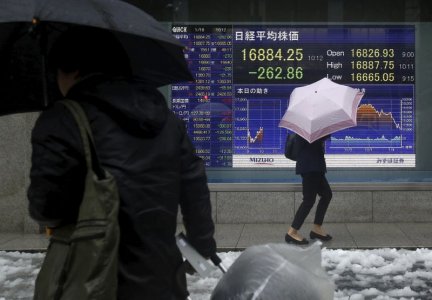 TOKYO (Reuters) – Asian shares and the dollar were higher on Thursday, but investors remained cautious as another shakeout on Wall Street and oil prices suggested volatility in financial markets will continue to temper risk appetite.

The searing selloff in oil markets appeared to abate in the early Asian day, though data out of the United States underlined the fragile state of the global economy and investor confidence.

MSCI’s broadest index of Asia-Pacific shares outside Japan was up 0.7 percent. Japan’s Nikkei added 0.5 percent after plunging 3.7 percent in the previous session to a 14-1/2 month closing low.

On Wall Street, major indexes finished with declines of more than 1 percent, though they were well off lows of more than 3 percent.

The dollar also bounced back from a one-year low notched against its perceived safe-haven Japanese counterpart. The greenback added about 0.3 percent to 117.25 yen after falling as low as 115.97, even as it marked impressive gains against some emerging market currencies.

“It is not your ordinary day in the foreign exchange market when the Russian Ruble and the Mexican Peso hits record lows while the Hong Kong dollar falls to its weakest level since 1999,” said Kathy Lien, managing director at BK Asset Management in New York.

“Emerging market countries bear the brunt of the selling because the slowdown in global growth and volatility in commodities causes significant economic damage for these countries,” she said in a note to clients.

Other data on Wednesday showed a drop in housing starts and building permits last month, which led investors to pare expectations of further interest rate hikes this year.

The euro edged down about 0.1 percent to $1.0873, ahead of the European Central Bank’s regular policy meeting later in the session. Expectations are for the ECB to hold interest rates steady but highlight increasing risks to growth and inflation while keeping the door open for further easing steps later this year.